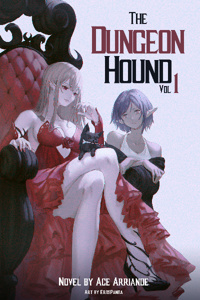 [Vol. 1 pt. 17] Why bury bones in dirt when you can bury bones between thighs?

Things were about to get very dangerous. The stares of everybody around us weren’t enough to overpower the feeling of Elanah’s fingers getting dangerously close to stroking more than just my belly regardless of who was watching.

Part of me wasn’t sure if I should let it happen. The other part of me figured, Fuck it, doing things my way for the last twenty-four years never worked, so I might as well. I’m already a criminal who killed somebody. Where’s the harm in having public sex in the body of a beast? Mom, you might be disappointed in me, but… I’m about to become a—

“Woah, look at Fane!” one of the other women in the room said.

Elanah’s fingers stopped in their tracks as she instead balled her hands into fists, her teeth gritting against each other as she glared past me at the floor.

Did… did something happen between her and Fane? She really doesn’t look like somebody—wait. Don’t tell me. What if he’s her ex? What if she tried pulling all this ‘fated’ stuff on him before? Was she—

Yep. There was something between them. I should have known better than to think this girl was actually obsessed only for me. So much for—

Wait. Is that it? If that’s it… I’m pretty sure he wouldn’t have known anything about this fated stuff.

“He even touched my arm! And when I broke his fingers, all he said was ‘sorry.’ Sorry! As if a sorry is good enough for touching me before my fated could!”

She… she broke his fingers? I’m sorry, Fane. I know this isn’t my fault at all, but I feel responsible somehow.

“I’m sorry… I’ve been tainted by another man, and it’s all his fault. He’s lucky that the hero who loved is against revenge, even though it’d be justified…”

Fane, please beat the dungeon as soon as you can. Trust me. This is for your own good.

The next thing I knew, Elanah picked me up and held me in front of her face.

It was a good thing that my arousal died down or else I probably would have been sticking it right in front of her face.

I wondered what would have happened if I did that…

“You… you don’t hate me even though he touched me before you could, do you?” Elanah asked. “I’m sorry, I promise I didn’t want it! He forced his hand onto me! I was just sitting there and then he tapped me before I even knew he was there!”

She seriously looked like she was about to cry. So, to try and calm her down, I lifted up one of my paws and pressed it against her lips. I would have placed it on her shoulder, but my legs were too short and stubby for that. "It's alright," I barked.

I thought I would stop her from crying.

Instead, I made her cry.

“You’re too good for me,” Elanah whined. She then stopped crying as quickly as she began to wiggle her nose as she sniffed my paw. “Ehe… you smell like popcorn.”

How does your mood swing that fast?! Seriously! Not even my mother swaps moods that quickly!

“My fated is even better now! I had no idea that you’d smell so good! Here I was only thinking about how your musk would smell…”

I’m not even surprised at this point. I’ve already gotten desensitized to her.

While Elanah lost herself in sniffing my paw, I turned my head to look at what the others were looking at.

Along the wall were several rows of screens that showed everybody currently in the dungeon. Surely enough, the screen everybody was looking at had Fane on it.

His red hair was impossible to miss.

More importantly, he wielded a rapier in his right hand while some sort of dark energy swirled around his left hand. In front of him were a couple of large, green beasts who looked like Chosen except way fatter and taller.

The first beast threw its fist forward to try and punch Fane, but Fane only needed a single, quick step to the side to dodge the attack. Then, as if taunting the beast, he raised his hand holding the rapier and waved a finger at the beast.

The next beast charged at him with its entire body, trying to tackle Fane to the ground.

Fane gave us watching a flashy backflip and, while midair, held his left hand out toward the beast’s head to fire off what looked like a spike of dark energy that tore straight through the beast’s skull, instantly killing it.

“Wait, since when does Fane know void magic?” one of the men in the room asked.

“He got it a couple of floors ago. The dungeon granted it to him,” one of the women answered.

I heard a jealous little pout from Elanah which caused me to turn my head back to her. “Hmph. I know void magic naturally. I don’t need the dungeon to lend it to me…”

Wait… Elanah knows magic? Naturally? Is she actually incredible? I mean, she was already incredible just going by her personality, but is she incredible in ways other than being crazy about beasts she doesn’t even know?

By the time I turned my head back around, the battle was already over. Fane was in the process of withdrawing his rapier from the first beast’s head, which he had thrust straight through its forehead. He then looked up at the floating orb watching him and gave a wink and smile to the crowd.

I was pretty sure that I heard a couple of women in the room swoon from that.

I was also pretty sure that I heard more than a couple of men in the room swoon from it, too.

I guess he’s actually pretty popular. Not that I should be surprised with the face he has. I wish I was as cool as—

Elanah interrupted my thoughts by turning me around and hugging me against her chest. “Look at them fawning over that bastard. He thinks he’s all that, and they eat it up. They don’t know that my fated is the best. Just wait, I’m sure they’ll recognize how perfect you are! They’ll see how cool, handsome, cute, brave, smart, amazing, and perfect you are, and then you’ll have to practically fight them off you! They’ll all want your attention… but then, while you’re the object of their desires, you’ll push through the crowd and embrace me because I’m the one who’s always been here for you ever since the beginning! We don’t need any of them as long as we have each other, isn’t that right?”

She started mumbling and giggling to herself, so I let her do her thing while I focused my attention elsewhere.

The good thing about Elanah turning me around was that I could watch Fane without having to twist my neck around. With how he was able to get a positive reaction even from the other criminals, I needed to pay attention and take notes if I wanted to survive and make sure to stay entertaining while doing so.

That backflip looked pretty stylish. Maybe I should practice doing something like that.

Then I heard whispering.

On one paw, I felt like I was already being dangerously stupid by tolerating Elanah’s obsession as much as I was. I barely knew her, yet I already felt desensitized to her.

On the other paw… did it really matter what kind of body I was in? We were both adults. Not only were we both adults, but we were both people. We both had souls. Even if I was in the body of a beast, I had a soul, and I had a dream to lose my virginity.

I turned my head to look at Elanah.

Fuck it. If I have the opportunity, I’m going to enjoy life as much as I can. I’ve waited twenty-four years for this opportunity and I’m not going to pass it up.

A note from Ace Arriande

For any who are concerned about what's coming next, it's faded to black. You're not going to actually see anything. I don't want to be banned. And yes, I've already considered basically every option to try and figure out a way to show people it. Trust me. The readers on Scribble Hub have been relentless in giving me ideas for how to write descriptive lewds for this without me getting in trouble. What you've seen is as sexual as things are going to get. Sex happens. It's not shown. Don't blame me, blame the puritan prudes behind the advertising companies who pull ads from sites if the platforms were to allow what I wish I could write. This story would be half smut if I was allowed to get descriptive with the lewds.

That aside, whoo, this series is officially the lowest rated series I've ever had now! It's even lower rated than my very first super edgy grimdank story on here that only like ~40 people have ever seen. Well, it's not like I didn't expect the outcome. While this version of the story does far better in being an "Ace Arriande" story and appealing to the type of audience that I want it to appeal to, it has none of the stuff that really made it popular in the first place (heavy dungeon grinding and LitRPG), so I expected those who are disappointed with the new approach to leave negative ratings. Plus it's even weebier and hornier now. Oh well! Ya win some ya lose some. At least the horny bastards on SH are keeping the rating high.

Bio: I do writing things and want to someday work on visual novels. Am also a weeb. You should expect weeb stuff in my stories.