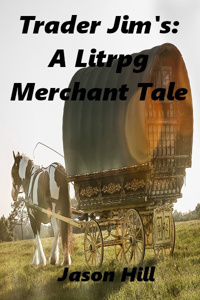 Hurry! Hurry! Hurry! Don't be shy. Step right up. Are you looking for a story where the MC is not a do it all type? You sir! Yes, you. Do you want to see a tradesperson actually use their skills in pursuit of their craft instead of fighting to save the world? Ma'am, are you tired of the blacksmith bashing heads with their hammer instead of metal? Kid, if you're looking for a lot of action or high stakes, there is a card game being played in the tavern over yonder. But by the looks of you, you're too young. Now get out of here, you're bothering me. If you want a story that is designed to be a simple slice of life tale that is a fun, easy, and relaxing read, then right this way folks, because Trader Jim's is for you!

Stormgion is a fantasy game world come to life and Jim is sent there by a powerful being. All the classic fantasy races live on this world but there are stats and levels as well! It is a dream come true, except technology is nonexistent as are most of the comforts of earth. Being forced into slavery or indenture is a very real possibility for the criminal and those caught by the unscrupulous. Jim decides to become a merchant after witnessing how a merchant in a village lives in comfort and luxury surrounded by servants and guards.

There are problems with that choice. Jim has nothing to sell, no money, or even knowledge of his new world. Jim discovers Stormigion is not a safe place and that he will have to travel to peddle his wares. The biggest problem is that Jim really doesn't have a clue about being a merchant. As a merchant, Jim will not have the fighting prowess of a warrior or magic like a mage. What Jim does have is his imagination and the ability to "invent" earth products in Stormgion, and profit from them if he lives long enough to do so or doesn’t get ripped off.

There is a little profanity, so the story gets that warning tag.

The main character, Jim, has a lot of heat placed on himself quite often; like the inopportune moment mentioned in chapter one.

However, every problem turns into an opportunity for Jim, like corn turning into popcorn.

This is the corny adventures of Jim Merchant, the trader. As alluded to in another review, this reads like a junk food snack.

There's nothing wrong with this popcorn, but it's also not a main course for my reading diet. Check the story out and see what you think. 🍿

I thought the story was an interesting idea and it started off well enough.  I didn't notice any glaring grammar issues.  I'd say that the writing overall is good.  The pacing and style are fine.

The negatives for me are the characters and the love interest.  The characters, including the MC feel two-dimensional.  The sub-characters lack agency and exist as MC devotees or detractors.  For the love interest, the author attempts to show the MC as a great guy because he removes the power imbalance.   Unfortunately, it just comes across as fudging the numbers to me.

Overall, I was enjoying the story for the light fun read that it is, up to the love interest, which was the immersion breaker for me.

2 ⭐ because I feel horrible giving 1 star.

I love the idea of mc being merchants and nothing else... But to do that he has to be a good merchant. Like

- bards tale MC is a good schemer and has experience with singing and song writing. Yet could only sing hit songs by other artists, because realism.

Good merchant knows the trade, and plays the game well. And wins with his skill and tiny bit of luck.

Not, immense get a trade and money as soon as he enters the world.

Gets killed and resucts with no questions being asked about that.

And on top of that gets a bunch of loot and money to boost.

Where is the consequences???

From the first 18 chapters it looks like the m.c's effective stats are

He has the worst

bargaining skills. He sucks at making deals and is even worse at making money.

I'd prefer if the author gives up on only merchanting policy and make the mc fight monsters and sell their parts. Even in medieval times merchants weren't just merchants.

Or... do some serious reading on trade and commerce.

Or.. rewrite Chapter 1 to turn mc into a 9 year old who knows a ot of trivia.

Or change the settings to something like.. low levels & skills have cripple his ability and rationality and as his levels increase... he regains his natural  skills & returns to being a sensible adult.

Or we write the the first 25 chapter so as to make sure he consistently gets scammed.

Or, do something like him following his path getting scammed and killed and becomes lvl 0 again and God appears and says tutorial is over, till now I'm tried my best for to ensure everyone goes smoothly and manipulated most of your interactions. From now on this will be like a real world. Where people can't make complex technology like fountain pen in one afternoon just from an amatures description.

Mofo's ride is too smooth. And it's boring to read. And extremely unrealistic considering that the author keeps insisting on the fact that it doesn't make sense for Smith to fight better than warriors.

Very very rough start, MC doesn't have any concern whatsoever of what happens around him. Violently reaped from reality to meet a god ? Just another monday to Jim apparently... Goes to a different reality ? Abstolutely normal... Gets killed by bandits and revives ? "God could have warned me it hurts" is all the reaction we get.

Grammar is okay and the plot is interesting, but the characters need way more work...

So far everything has been handed to the MC for no discernible reason. The first day, after a couple hours of help, a poor farmer living outside a nowhere village happens to have a weightless bag and later Jim gets survival supplies and room and board for, albeit, a new way to eat corn.

Two days later, his word is taken over 4 people that have been seen trading regularly with the rich merchant that the people in question robbed/killed him. The people are attacked in the street and all of their things are taken (including some random person) and divided up between Jim and the town *guards*.

At no point in the story does Jim concern himself about him dying, his old life, where he is, or how he'll survive.

I must admit I binge read all chapters here and added the author in patreon to keep reading on a chill sunday with nothing else to do. (Ok, ignoring what I had to do) Traders Jim is such an easy going read, it is perfect to see him building his way, constructing and being innovative in another world.

It is a niche I do enjoy, but believe me, style and grammar arent an issue here, even if you are picky. Thing is, this is a story to relax, slow paced, with new discoveries about the world at every corner, and a MC that is able to grow. Has to grow. So he is not a mastermind, he is learning and finds people to grow together with him. And I love how he builds the things around him.

Althought I find the transmission to his other world somewhat weak, its like, only in the first chapter. Give the world of Traders Jim a try and see for yourself! You will be reading this like its popcorn. ;)

Not sure how many more words I need for an advanced review, so.... I just wanted to give a fair chance with this, since the only other advanced review seems biased to strong MCs. I just think I rather enjoy having a MC that is not overpowered in any way, its his charm. He is still building, I am sure one day he will be strong enough to build a merch company of his own.

This is a really good story by an author who is already good at writing trading litrpg. A good amount of action so far plus an MC who uses his brain. No major errors, very well written, and just the right pacing. Good unique elements and worldbuilding, as well.

Quite engaging and absolutely worth a read. Give it a go!

Overall pretty great read, though it does have a rather rough start the more you read and if need be push through the better it gets. Definitely something if you binge through it will hold you and not let go. Plot is effectively light though it's there if you're looking. It's more akin to a slice of life style with fantasy interwoven throughout.

You can't stop when you start,very easy to consume. Author doing decent job for insane release pattern. But I hope Litrpg part diminish over time, I realy dont like blue box thing its killing the flow. Except for that part perfect for chill read.Good job author thanks for the story.

I am enjoying this story. Other than a few hiccups at the start, I feel it's really well paced with a good charctorization of the main charactors. There is a bit moch in the way of stat tables for my liking, but those are easy enough to skim over if you'd rahter not read them every time. For those who do like them, they are there to read so good overall.

I do like the different take and type of charactor the story is centered around.