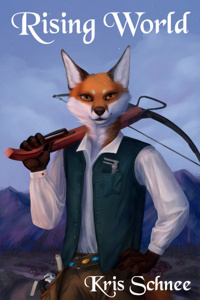 Vonn of Shieldpoint is an ambitious young inventor who, as far as his family knows, just survived a terrible accident. Really, he didn't. Instead a being known as the System has recruited the soul of a modern college student from our world, to fill in for him. Given a new life in a new body, the former human wants to make good use of it and fulfill the dreams of the one he's replacing.

He's an Engineer in a world where that's a character class with explicit levels and stats. This world is just discovering the power of steam and clockwork and the occasional magic dungeon crystal, so Vonn is just in time to become a famous genius.

He just needs to figure out what the gods actually want from him.

Reviewed at: Fox About Town

Let's say a meteor came outta nowhere and killed you.  Let's say a powerful entity offered you a chance to be reborn in a gameworld in-between your past life and the next.

Are you gonna say no?  Well, maybe.  But Vonn, an engineering student at university, didn't.   He chose to be reborn into a fantasy world ruled by a system.

Follow his story as he navigates his new world and his new life in this slice-of-life adventure.

Style score: the style is fine.  Pacing, scene-setting, etc.  The style of writing has no issues that I saw.

Story score: the story starts off well, a bit standard for isekai fantasy litrpg.  Having read 15 chapters / 63 pages, the pacing of the story is slow.  Nearly slice-of-life.  While that pacing is fine, there was nothing to identify it as such.  Around ch 7, it started to feel a little boring as I was expecting the plot to emerge.  By ch 9, I realized that wouldn’t be happening immediately.

Grammar score:  I saw no grammatical errors within the 15 chapters I read.  That already puts it above most Royal Road stories, including my own.  Not that I'm the best at catching errors.

Character score:  I felt there were several missed opportunities in this story so far.  The main character hasn't done anything to make him sympathetic to me.  There's little to no characterization and little emotional depths explored to find myself attached to.  While this might be considered early in the story, I felt it was an opportunity missed.

All in all, the story hold potential and promise, and is worth seeing how it develops from here on out.  Time will tell if that potential is realized.

Reviewed at: Time For (a) Class

Will do a quick review now as it's only a few chapters in but deserves some recognition , so far it's fantastic, well written story and characters intresting twist on a popular plot line beginning and character selection. Cleanly written and informative without having info dump chapters that overwhelm you be intresting to see how this progresses and if they keep it up, well worth the read

To much training not enough engineering

I like this story so far especially the engeneering parts since I really like the whole uplift thing of introducing tech to a fantasy world.

However the fist thing he does after arriving and getting his class is start training physical skills to increase his stats and not even focusing on stats that are releveant for beeing an engineer. (would have preferd a more min/max protagonist) The only thing he has build so far is a pinnball machine and the story really dosn't focus on that How popular is the pinnball machine? How much money does he make with it? etc. are all questions that would be intresting to know about but instead he just builds it, sells it to like 1-2 bars and goes right back to either training or going on adventuress in a random dungeon. Why does he go to a dungoen sure it's probably important that dungeon exist from a world building point of view but that dosn't really advance the engeneering thing in any way it's not like he goes there to get special material or anything like that.

One more things that boters me is the perk he picked after leveling up te Engineer level 2 why did he chosse somthing that's just gonna improve effeciency when he could have picked somthing that would let him repeately assemble/dissaseble stuff and get infinite resources. His explanation that the gods would be upset at him if he exploits it dosn't make much sense at no point before that did anyone mention any gods that would be upset if people exploited things like that so why does he just assume they would be uppset?

In general, this story is above average compared to other RoyalRoad stories. It has its issues and I'll address those issues in the hopes that they would help the author grow.

Style: The first issue we see is here, the author's style, unfortunately, is disorganized, which makes it harder to follow along with the story. A more organized approach to scenes and dialogues would definitely help the author.

Story: Story we are getting told has a good premise and as far as I can see the author is developing the story in a good trajectory. If you are not turned away by the disorganized style, this could be an excellent story for you.

Grammar: It has some issues, but not much. Mostly, grammatical errors are about unnecessary commas and commas not being placed where they could help bring more clarity.

Character: Second big issue the author has are characters. They, unfortunately, suffer from the author's disorganized style. Dialogues are scattered and do not really help at bringing characters to the forefront. A more structured approach to dialogues will help with character development.

Overall: This story is above average and could become an excellent one if the issues I pointed out gets better. I hope, the author keeps working on this story and improve it.

A slice of life story about exploring an engineer class in another world.

Emphasis on the slice of life. From the summary I wasn't sure if this would be slice of life or power fantasy (with a showboat MC awing people and face slapping, etc.). Both have their pros and cons, but this definitely falls in the slower, less dramatic slice of life category.

I don't have much to say about the main character's intial transmigration (standard random event that kills him), but I do like how he had some choice over who he transmigrated into. I think there's potential for exploring what happened with those he didn't choose (he already seems a little interested in investigating it).

It would be nice to see more reactions to the main character's inventions. Right now he makes something, maybe one person asks, "how did you think of that?" and he moves on. Reading about the main character engineering something is fine, but reactions and repercussions are important to keep the story interesting. I hope there is more of that in future chapters.

Also, the things the main character makes are kind of random:

First a pinball machine, then a crossbow, then maybe some kind of water irrigation device. He doesn't really seem to have any kind of direction.

There's that vague mandate he has from the system to do something important, but so far that has had pretty much zero impact on the story.

Things are still in the beginning stages though, and I can see a fair bit of potential.

Not to shabby so far

Reviewed at: Struck Down

The mc's past has been expalined suffieciently and while his behaviour is strange considering him being dubbed 'young inventor' but for now it's still logical hence the score.

i don't like writting long reviews, i found a hobby to write reviews on new works since mine doesn't have any.

Reviewed at: The Foxtail Wand and Bicycle #1

I have read all the way to Chapter 31, posted a few hours ago now. This story is pretty decent. I am not going to go in-depth about the style and grammar and whatnot, as others have done that already and it has been consistent.

The story is currently fairly "slice of life". However, in-universe the main character's age is supposed to be a time of study and growth, as they are able to gain Stat Points every season for the first five years. Already, we have seen three months pass in-universe, and there is still much to do.

The Main Character is going with an "Engineer/Mage" build, which will probably end up something like a classical Artificer. He is working from Renissance-era tools to create modern items, using his knowledge of math, physics, and engineering from Earth. His "brilliant" inventions so far have been a marble maze toy, Pinball machines, and a very basic bicycle. We are heavily hinted towards Steam Power, not only in the Story Summary but also in the story itself.

Probably the most interesting part, for me, of any story like this is the Magic System, and the System itself. Magic in this world seems fairly limited, at least at the low levels we have seen; using mana to add or remove energy of a certain type. "Ice" and "Fire" spells are adding and removing Heat, "Light" and "Shadow" would be adding and removing Light, Air spells are adding Motion/Kinetic Energy, Lightning is mucking about with electrical potential. Hints of higher level magic include necromancy and "blessing" the fields with Earth magic.

The system itself has not revealed all of its attributes yet (and that is my main complaint, we should be able to see the level 0 attributes). However, Attributes can be increased at the Temple every so often, by sacrificing three skill levels in skills governed by that attribute. Skills only have two levels maximum, and you lose a level when you raise an attribute.

Finally, the system for Perks is well thought out. While the MC got basic information for them at first, he could focus on the individual perks to gain more information. One of the perks available would "magically replicate 10% of materials used", basically a 1/10th refund. The fine print said that it wouldn't work on rare materials like Dungeon Crystals or Gold, and that the skill would fail if you attempted to use it to farm for resources (by building and deconstructing a device multiple times).

Reviewed at: We Know the Game

So funny! The story is very clever and it is just getting better. I like the main character. The progression is fun and you get the general idea of it even as they skip through chunks of time. The idea of the storytelling from Earth is a fun added aspect and I am looking forward to further chapters.