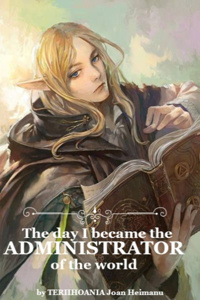 The day I became World Administrator

Isaac is a 21-year-old computer science student whose life was completely turned upside down when a strange window appeared in front of him in the middle of a class:

Follow the story of Isaac, a somewhat lazy mage with powers limited only by his imagination in his quest for a quiet and friendly place, alone and at peace.
Have you ever imagined magic from an IT perspective? Come and discover it with us!

Author's message:
This is my first book that I am trying to write in a serious way. It is therefore possible that mistakes may occur. Do not hesitate to comment on your opinions and let me know if something is wrong (as long as the comment is constructed and justified).

Scheduled publication rate: One chapter a day at 6 pm (Paris time) from Monday to Friday.

Be aware that English is not my original language.

With that, I hope you enjoy reading it.

--------------
Cover photo from the character "Aranzeb" (https://archeage.fandom.com/wiki/Aranzeb) from the game Archeage (https://www.trionworlds.com/archeage/en/)
For any dispute request (or request to remove the image), contact me.

I wanted to like the story but i just cant get past the grammar.

its full of missing words and  extra words that make no sense at all, The syntax is really bad at times. The author managed to use "Nevertheless" instead of "However" or using Discover instead of Explore, or the more annoying one  Old one instead of Elder.

Reviewed at: 2. From the sky to the ground

The story seems interesting, but the grammar needs a lot of work. I reccomend keeping an eye on the story to see if they get an editor. With proper grammar this seems like the kind of story I would enjoy reading.

I dont really have much else to say, but the review needs to be 50 words long so...

Enjoyed it and will continue reading

Reviewed at: 59. The Magus' secret past

My overall score is 5 stars, because of how much I enjoyed this story.

But that does not mean it hasn't got any problems.

First Grammar: It is understandable, considering that the author is not a born english speaker/writer. But, in the first couple of chapters, it is clear(to me) that the author was slightly inexperienced in using the English language. But as shown in later chapters the author has improved.

Story: It has been good so far, At the current latest chapter 59, it is clear to me that the story from chapter 1 to 50-59 has mostly been focused on developing the Mc with just some progress in the plot. But in my opinion, the things that have happened in the story are probably only a springboard towards what is going to happen in the future. The author has also chosen to go a new(in my experience) way in the world administrator/ruler genre. The author has created a convincing reason for why the Mc should go out, explore, and develop.

Style: Do not really understand this Kategori.

Characters: The Mc is good, little disappointed in how the author dealt with the Mc losing all he ever knew when "End of simulation" happened. If you're wondering how the author dealt with it... He didn't. I can barely recall a single mention of what the Mc lost described in the first few chapters. In later chapters, it appears that the author has tried to fix that, but that doesn't really help considering that the Mc basically had already spent weeks in his new reality without it at all bothering him.

(minor spoiler)This is a story I have enjoyed reading. I hope the author continues writing. My only worry is in how the author is going to deal with the Mc being the administrator. The fact that Mc does not have access to his newfound abilities and has to learn on his own is a big plus. But I'm afraid of the possibility that despite what I have seen so far, the story is just going to develop onto the same path as others in the same genre. The path where the Mc just interacts with high officials of kingdoms, totally ignoring that 99%(just a guess) of the world is made up of common non-magical people.

Of course, considering that magic is rare, and most of those high officials are not mages. That might not happen.

I would recommend this novel for anyone to at least try. I would understand that it isn't really the best out there. But at least I enjoyed reading it.

(I'm not experienced in using the English language either.)

Nice to read and is developing well.

The beginning can be a bit heavy because of the magic theory and how it works but it ends soon. The chapters are posted regularly so you can expect a continued story.

There are few incosistencies and the grammar is quite good.

Isaac is a 21-year-old says the description but acts nothing like it. I'm sick and tired of these so-called 'smart' people doing reckless things that don't mesh with the age they claim.

Another pattern I have seen is they get 'desperate' for contact far too quickly. Anyone who can't spend a year by themselves with no ill effects needs to see a psychologist. To not be able to be alone for such a short period...