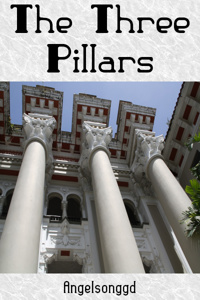 Remove Ads
Next Chapter
A note from Angelsonggd

Cyprianus is concerned. Something is wrong. Thank you for reading. Any commentary is greatly appreciated and helps me grow as a writer. Please rate and review if you have the time to do so.

There was a heavy expectation in the air and only a single one of those gathered under the silver, mourning moon knew that death would come for them. The strange thought about the death that would surely come for them had kept Cyprianus restless for several days now. There was this cold, hair raising tension surrounding him. Unfathomable feelings for a soldier brave and strong, able to lead his men to death and beyond when called upon to do so. He commanded some of the best men in the empire but these men seemed oblivious to all but the wine that sloshed down their throats and warmed their blood. They paid more attention to tales of utter rubbish and gave no thought to the set of eyes in the darkness, watching them, waiting, like a predator ready to strike.

Who would believe him? The young general had put so much effort into keeping his men safe. Already his younger brother thought him some ridiculous fool for the dreams and visions he’d come to discuss with Livius. The green eyes of his little brother would test Cyprianus’s words, making his older brother feel rather inferior. Such a simple look to be given by someone who was still a child. Cyprianus would be in trouble if Livius heard Cyprianus referring to him as a child. This brought a hint of a smile to the dark-haired general’s face. He turned from the far-reaching, flat landscape, dry and bare now that winter had set in so heavily. A more pleasant sight awaited him when he turned to face the camp. A huge campfire seemed such a welcoming thing where he stood here in the cold that nipped at human flesh.

In the great empires of Rome, this bitter cold came once per year and was ever there during the six months of winter. The people who honored Gods and Goddesses of myth and legend knew it was Demeter’s time to mourn for her stolen daughter during these frigid months and mourn she did. She made all on earth mourn too. Proud, young roman soldiers seemed not to care for the mourning Goddess or the chill in the air. They cared not that their campfire left them exposed to those hungry eyes that made a shiver rise along Cyprianus’s spine, already. There was little shelter save for the tiny tents that had been pinned to the ground to keep them from blowing away should the wind whistle during the evening’s passing.

A mild chatter around the fire was to be heard for the very sake of keeping morals up and hopes high. Being so far from home, it simply had to be done if it was a soldier’s life you chose. Men spoke about the maidens they wished to marry when they arrived home in merely four days of travel. Some spoke about whores and judged who was the best of the pack among the working girls. This is not to say that some soldiers didn’t appreciate the male body. It was just rarely spoken of for the sake of unwanted rumors flying about. Despite the chatter and merriment, there was one missing from the group. Livius noticed it instantly. The moment Cyprianus’s younger brother began searching for him, Cyprianus turned his back, hands settled behind him in a contemplative way and resumed his staring back into the heavens. It was Cyprianus’s habit to keep a protective eye on Livius. If all it took was a prayer to protect his brother and his men, he’d have no problem praying till the very day he died. The feelings of being exposed remained, however, no matter how much or how hard he prayed. During their long journey that they had been sent on by the emperor, Cyprianus could not shift the feeling of unease. Cyprianus had been sent on a quest to rescue a priestess of Aphrodite from bandits that had captured her. She was the daughter of a wealthy statesman and it was their task to return her so that a wedding could be planned. More land for their father and more titles would follow. Wealth. It was all about wealth. The only reason Livius was here in the first place was that it was his 16th year and he’d insisted on following his brother on the journey. The dreams had started weeks before the journey had begun. It was like a dark cloud hovering over Cyprianus making him feel restless. The dreams were always the same, night after night, like a never-ending circle of torment and torture. They meant something. No one would believe him if he ever was to seek counsel. Livius had laughed the first time he’d heard Cyprianus speak of dreams, warnings, premonitions and did such a cruel thing in reminding Cyprianus that he was a general, not a medicine woman. Livius would keep teasing Cyprianus now. It did indeed hurt to have such torment thrust upon him. He had no one to discuss his fears with. How could one prevent something when he could not warn the people that might die? They were 2 weeks from home and Cyprianus knew that Livius could tell that he was getting anxious. The dreams. The horrible nightmares were the main reason for his anxieties and the fact that he couldn’t get more than three hours of sleep each eve. If they had never been sent out on this quest.... The reward for the safe return of his daughter was an irresistible offer to their father, the Emperor of Rome. Their father was quite the ladies man and it did not pass the two princes by that the reward for rescuing the girl was for her hand to be given in marriage. They had rescued the priestess but had found her in the upper chambers of the temple that had been ransacked by bandits, screaming about monsters that drank her blood. She had many a cut and bruise on her fair skin and they had to give her medicines to keep her calm. Her tent had been watched round the clock. Of course, the men had all teased and joked that there had to be something wrong with her because she was far too perfect. Full plump breasts. Golden curlets of hair falling across her shoulders. Rosy cheeks and blood red full lips. In all, the perfect woman, except for the fact that she was crazy. Naturally there had to be something wrong with a woman who looked like Titiana did. The little priestess, to avoid injury to themselves or the girl had to be tied up and gagged because she’d made such a fuss over demons chasing them that it had been near to impossible to keep her both still and quiet. All she seemed to do when awake was stare, eyes lit with fear and tears. Cyprianus had seen the way Livius looked at her and he could make a judgement about the fact that Livius wouldn’t have minded her being his own bride despite her insanity.

It was not long before Cyprianus could sense his brother coming toward him. Being the commander of a troop of guards who had gone to the temple to retrieve the young maiden for their father earlier that week, Livius needed to make sure that Cyprianus kept a level head and his younger sibling seemed to take that responsibility very serious, indeed. That was why Livius had been told by his father to accompany Cyprianus and he’d gratefully accepted. A chance to shine in front of Cyprianus and his father didn’t happen often and he wouldn’t just throw it away like that, naturally. When Livius finally came to stand beside Cyprianus, he had a wine sack with him. Even his own brother, so empathic and sensitive could not sense the demons watching them in the plains. If Livius could, there would be no wine sack and indeed there would be a weapon of sorts in Livius’s hand instead. It troubled Cyprianus greatly, and he peered into the distance, ignoring for a moment that his sibling was there. It didn’t stop Livius from staring at him. Livius, standing there, as he often did, being blatantly ignored by his older brother, which he was also used to, could have sworn his brother was a demi-god for only a demi-god would still be standing after such a hard day and it had truly been an hour since they’d settled down to rest finally. This meant that Cyprianus had been standing there for the last hour. They’d only barely set up camp when Cyprianus moved off from the group to tempt the stars into a staring match. Resolve like that didn’t come in the form of a normal man, surely. How can a mortal man walk from sun up to sun down and still have the strength to stand there, star gazing like he’d only just gotten to his feet? That was just one of the many differences between the two princes.

Every now and then when Livius had a moment to ponder his older brother's features, the nagging suspicion came to tug at his mind. There was a question as to who was the true son of the Roman emperor, their father. Livius had blonde curls that were turning darker with age of course, but the point is his hair had been blonde up until about two years ago when he turned fourteen. His father was dark haired. Cyprianus, on the other hand, had dark brown hair which had always been that color, ever since Livius could remember. Livius had green eyes. His father had green eyes too. Cyprianus had the bluest of blue eyes. Now, he knew his father had a habit of getting too personal during the party sessions at the palace with young women who seemed all too happy for the emperor’s attention on them but Livius couldn’t help but ponder, who was the bastard child between him and his brother? Who did the empire belong to when their father kicked the bucket, eventually? There was a rumor that one of them had been taken in to be raised like the emperor’s own and not a bastard child at all but who. Him or his older brother?