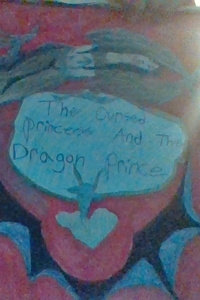 The cursed Princess and the Dragon prince

I was once told of dangerous creatures called dragons that live up in the mountains, so I was never allowed to go near the mountains. It’s not like I followed the rules of the castle, so I do sneak out of the castle walls and go through the forest from time to time. I hate how much of a bore being a princess is, but no way do I want a prince to take my hand.

“Princess Aria, your father has called for your presence in his chambers”.

“Can he not come to retrieve me himself? He isn’t ancient yet” I say with a smile.

“No princess, he says it’s important that you come to his chambers and he will tell you there”.

This is tiresome, what could father need from me at such a late hour? Well, I won’t find out by just sitting here. So I got up off my window seat and followed the maid to my father’s chamber, my mother doesn’t always sleep there. As we walked down the staircase of the tower I live in, I looked out each of the windows on the way down. The night outside looked almost black, but there were stars and then I almost lost my footing.

I was able to catch myself using my hands and used my legs as a performer in the village square, landing my feet on the step. It was a close one, now I’m really lucky I started learning from a street performer when I snuck out.

The maid looked at me in shock and shook out “how did you do that Princess?”.

I didn’t take too much time to think of an excuse “oh it’s a secret, so no telling”.

I put my finger to my lips to indicate be quiet and we continued on to father, then when she knocked on his door. “Yes?” she cracked open the door and said, “your majesty, I’ve brought Princess Aria as you requested”.

“Let her in and leave us to talk in peace”. well, I guess even mom doesn’t know about this meeting. The maid left the room and before the door closed all the way, I sat down to the chair across from my father.

I asked him, “What do you need? I’m sure you are aware of the late hour”.

He looked at me with a cold expression and told me “you have to marry soon, you can’t just keep avoiding it”.

“I don’t need a husband to rule this kingdom, I can rule on my own” he looked disappointed and shook his head.

“You might be confident in yourself, but you need a Prince to be queen” and I just felt a flame light in me.

“I’ve seen how bad men are at ruling in other kingdoms, that is what I have learned over these years”. My face felt like it was turning red, to some people it might look like I’m embarrassed if they don’t know me and they would be wrong.

Getting to my feet I look my father straight in the eyes and say “if there is nothing else to discuss I’ll be going”.

“Aria, don’t be so childish and run away from your responsibility to this kingdom”.

I turn away and walk to the door, but before I go. “I’m no child, so don’t treat me as if I’m a toddler and I’ll keep in mind the welfare of the kingdom”. Then I left to go back to my room for what others would think is me turning in, but no I won’t.

I have a show at a traveling circus, I’m a performer that does both trapeze and balance rope. I ran to my small box that has my magical hair clip, it looks like a tribal feather hair accessory and can help me be any animal I want. Too bad there is no way I can really escape this life and go on some kind of adventure. I put the hair clip into my hair and thought about being a crow, so I won’t be seen in the night sky. When I got to the showground and the well-dressed ring leader smiled at the sight of my arrival.

“Ahh my wonderful Ariella, you are here at last, and now get inside to prepare yourself for the crowd tonight”. I returned to myself and bowed respectfully to him, then went in to go to get on my outfit. The clothes were made from a magical fabric and it fits even in all the animal forms I take. The form-fitting tights and a form-fitting tunic tight to my chest.

“Hello, Ariella, did you hear who's coming to the show tonight?”.

I raised my eyebrow in a silent question, “It seems you haven’t and I have the honor of being the first to tell you”.

She looked around, so as to not be overheard for some reason and leaned in conspiratorially. “A dignified royal is going to be in the crowd, but no one knows of his homeland”. That doesn’t help, maybe I should indulge in asking more.

“What pray tell is his name? Maybe I know of him, you know how I perform at the castle from time to time”.

That isn’t far from the truth, but it is performing when you have to put on your best act to not make a fool of one’s parents. “Hmm well I believe the girls called him Dracon, but that is all I heard and he has the most beautiful eyes I have ever seen”.

Her childish wonder amuses me, it is as if she is a patron and not a performer getting paid to make the audience merry. “Well then I shall give him a show he won’t forget and maybe you should too”. Kala always likes a challenge and I was the best to go against, but only because of the charm I have.

We waited together, I was waiting to be introduced by the ring leader.“Now boys and girls, ladies and gentlemen. it is my great honor to introduce the magnificent Ariella”. I ran out waving my hands to the crowd and smiled big, I climbed up to the trapeze. Then like I always do I try to excite the crowd, but tonight I should be serious for once and took the trapeze to swing.

Back and forth to gain momentum, then I turned into a monkey. I stood on the rod of the trapeze and held onto the ropes. Flipping backward I was able to stay on the trapeze and then Kala came to the opposite plate form. She gave me a determined grin, so I waited as she stepped on her trapeze and swung to go towards me. When she got to where she wanted, that is when the metal hoops were brought out and threw them in the air.

I changed to a Raven and flew through each hoop, then used my talons to keep the hoops up in the air. Kala spiraled through the hoop I was holding and made it to my trapeze, it always makes me proud to see her do these tricks. When we finished our performance, I looked at the crowd and smiled at the cheering people in the audience. Then I caught sight of someone who looks more beautiful in appearance and his eyes were such a perfect amethyst purple. It isn’t a normal color for eyes, but they look so mesmerizing and then I noticed he was watching me too.

Bio: I'm 25, I loved writing for a long time and not many seem to read my stuff in real life. I'm happy to get feedback, so I can learn to get better at creating.