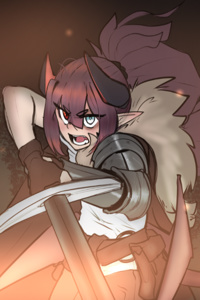 Aidan was bringing his military career to a close, after a little over six years of fighting on an earth now littered with dimensional tears. Leaving one of the human resources buildings after completing the final details on his pension paperwork, he finds himself being cut short as he suddenly blacks out while driving out of the parking lot. The next moment, Aidan awoke in a clearing with no idea where he was, or who he now was.

The Planned Release schedule is T/F

At CH9 the story shifts perspective from multiple first-person perspectives to only the mc first person and third person for the rest. Eventually, those chapters will be reworked.

Posts will always be released on scribblehub first

Reviewed at: C31 A broken line

One of the possible goals in writing a fiction is to invoke certain feelings in your audience.  That certainly occurred with me--in the form of white, blinding anger--though clearly not in a good way.  I slept on it before writing this review so I've calmed down now, but there are two serious warnings to potential readers that I feel compelled to mention.

First, the protagonist is a misogynist.  Not in a physically violent way, but rather in attitude.

The way that he handles becoming a girl upon reincarnation (possession really, as it's not from birth) is deeply disrespectful to women.  And after a year of adjustment, she both (a) still hasn't fully adjusted to the point, and (b) still has deeply concerning attitudes towards women.

Second, the protagonist's character as a whole is very difficult to understand.  One might say that there's a bolted-on personality

of a girl onto a male ex-soldier.

You might say that the protagonist has a case of multiple personalities.  In any event, there is a deep divide between the protagonist's internal self and external self.  I think the most charitable interpretation of this is that the author chose to do this intentionally.

However, it is deeply infuriating with it comes to the plot and characters.

It messes with the pacing severely as the protagonist has frequent internal monologues about what's happening or what they think of it.  It messes with the plot as they frequently take action (or action is taken with them) that contradicts what they internally desire without any reason provided to override this. It messes with the plot further as their doing something with which they have no prior experience and which they have (or should have) the mental maturity not to act without seeking advice.  It messes with their free agency as they frequently have an opinion about some proposed course of action, but is unable or unwilling to externally express it, thus becoming subject to the whims of others. And perhaps worse of all (and related to that last point), it means that they are frequently disrespected by others, but does nothing about it other than to suffer internal angst.

While it seems like this was all intentional by the author, what I can't resolve is why.  Perhaps there's some niche genre out there I'm unaware of where this is entertaining, but it strikes me as little more than sadism.

With that out of the way, two minor points.

Second, as to the other reviews sniping at each other about the grammar, unfortunately we (the readers) can't tell after the fact when a chapter has been cleaned up.  The prologue does not appear that bad, though I can't tell if it was always like that or recently improved.  That said, many of the chapters after have sporadically poor grammar (not to mention the style used when writing dialogue, which is extremely atypical for English-language works (excepting screenplays, which this is not)).

Update June 6, 2021: The title is "redux" because apparently my old review had untagged spoilers.  Had to repost, but that qualifies as an entirely new review.  Seem to have lost all the thumbs-down and -up. C'est la vie.

I feel I need to respond to the review of Zip123:

I've read fro the Prologe to Ch. 19 and I have no issues with the grammar or the punctuation. I'm not a native english speaker, but to me there are no big errors.

Some sentences are longer than in other stories here on RR an I needed a second or two to sort them out. But I've read far worse.

I like it at the moment and hope that the story progress with character-development and interesting backstory.

The overall plot sounds interesting and the character backstory is also pretty ok, but there are huge problems with the rest.

Right in the first chapter I started to read, there were mistakes with the language, the grammar and the punctuation in pretty much every sentence.

I wanted to see if it got better in the later chapters so i also read chapter 19.

I dont want to be mean, but i had the impression that it got even worse, especially the dialoge between the characters.

I stopped reading at this point because I felt the story is not going to be enjoyable to read for me before some major improvements are made to the overall structure of the language and the grammar.

English is my third language so I also have some problems writing in english, but in my opinion you need someone that has a solid grasp of the english language to proofread your story.

I know that this is your first story on this site and hope you stick with writing and improving, but at least right now I have to give your story a pass.