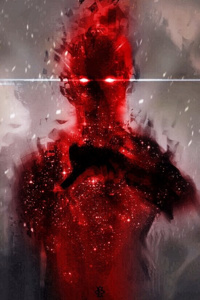 The Story of a Girl & a Goddess Whose Souls Became Interconnected

There are currently 150+ parts that I need to upload. To get a head start on it, I mass uploaded 40 parts. From now until I'm caught up, I'll upload two parts a day at varying times. Once I am caught up, the release schedule will be Tuesday and Friday.

This is the story of two people, a Human and a Goddess, who lost their memories.  The Goddess, Itarr, was sealed up for hundreds of thousands of years and has regressed to being nothing more than a humanoid-like being of red energy.  The girl, Servi, woke up near a forest and died later that night.  Instead of ceasing to exist, she was brought before Itarr, who spoke of a way for them both to live.

Even though she was content with dying and fading away, Servi took Itarr up on her offer, and their souls became interconnected.  Together, as one being, they ventured forth off into the unknown world.

What To Expect: A story that is a slow burn, and It's filled with romance and hardships. Because of the story's slow burn-like nature, character growth and development will take time to achieve. The MC-- Servi-- is overpowered, but the tension is still there. Her conflicts, for the most part, are mainly internal in nature. She has her own sets of challenges and internal mountains to climb, and they are different when compared to the people around her. In short, Servi's life isn't an easy one even when she has the power to destroy an army. When the main couple gets together, expect there to be descriptive sex scenes.

However, there is a content warning because this story contains depictions of gore, rape, and torture, sometime to an excessive degree.

This story is also on scribblehub.

Thank you for reading this!

Note: This is my first time ever writing a story that other people can read. I will do my utmost best!

Reviewed at: Book One – Chapter One – Part One – An Unforgiving World And An Unexpected Ally

A brother and a sister are taken captive in a demented research facility where death is mercilessly the fate of some, yet just as mercilessly denied to others. Somewhere else, a seemingly unconnected set of siblings are unaware of the conspiracy of forbidden magic that are pulling them in. These are some of the stories told in the 8 prologue chapters.

Now, these are all plot threads that I expect to go places. I won't be reading where they go, because all those content warnings in this aren't just there for show, and I decided this story isn't for me. (In fact, I regret reading this.) That said, that doesn't make it bad. It's well written, for what it is, and if you're the target audience then give it a chance.

The main reason I'm not giving it the full 5 stars I might've otherwise, is the many perspective jumps in the prologue. In those 8 chapters, we get the perspectives of at least 10 characters, some more in-depth than others. Be prepared to wait a bit until the plot threads start to connect.