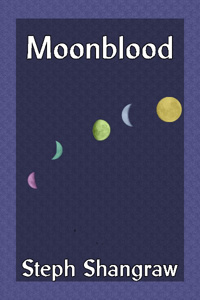 Five moons rise over Evanir, each in her own cycle, and each moon is also a god, one of five sisters.

Many gods create spirit attendants and companions, brought forth fully-formed. Long ago, the moons worked together to create a lineage that are, instead, humans transformed by the mingling of blood.

They intended them to be long-lived and to draw their strength directly from the light of the moon who chose each individual. The five sisters had different goals in mind – one wanted it to be a blessing for scholars and artists, to give them more time and fewer physical distractions; another wanted them to have an animal form, different for each, to keep them more in tune with nature so they could serve as guardians of the wilderness.

There are drawbacks to their children having human lives and personalities before being chosen: not all share the goals of their divine mothers, and some choose to put their gifts to darker uses.

Those carrying the blood of one woman, fleeing the corruption in search of a quiet life, take a different path.

Moonblood isn't so much a novel as a series of adventures of varying length. They involve a core group of people, which does grow over time. They take place in a fairly low-magic world, but despite that, our core cast are directly connected to the moons and have various abilities, including limited shapeshifting to a single individual animal form.

As with all my work, unless gender, orientation, or other aspects of sexuality are explicitly stated, I suggest not making assumptions.

I have an extensive amount of Moonblood already written and polished (over 200K words in 9 stories ranging from a 5K word short to novel-length arcs). New chapters will be posted Mondays and Thursdays.