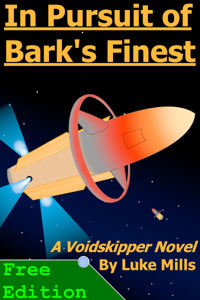 In Pursuit of Bark's Finest

by I Just Write

On the frontiers of transhumanity’s expansion into the galaxy thousands of light years from the light of Sol, things can get rather chaotic. There are countless millions of nascent interstellar nations securing their interests, pirate ships prospering off plunder and deniable mercenary work, dissidents setting up their own civilizations, and other groups all trying to push an agenda. When these groups crash into each other, the results can become extremely messy and convoluted.

Recently, a frontier nation calling itself the Red Star Union has found itself at the focal point of one such complication. A freighter under their protection has been sabotaged, hijacked in interstellar space, and robbed of its cargo. This would be bad enough even if all it were carrying was luxury goods, but the freighter Nebula Plow was carrying more than just normal trade goods. Indeed, her cargo of Non-Orientable Wormholes for use in starship power plants was both very expensive and very, very dangerous.

Now the Red Star Union has to worry about a pirate crew running around with several extra devices capable of converting matter into antimatter with negligible energy cost. With those, the pirates could be capable of inflicting untold damage if allowed to leverage their ill-gotten gains into a stronger position, a possibility the Union finds completely intolerable. Unfortunately, all that the Red Star Union has to go on for evidence is two names; that of the captain, and that of the ship. The Captain is going by the possible pseudonym of Fuller, while the ship is named Bark’s Finest.

And thus the orders came down to the Union’s Bureau of Starforce Intelligence: find more information on these pirates, conclusively identify them, and figure out where exactly they’ve gone to ground so that the fleet can crush them before they get established. Of the many agents that the bureau assigned to this mission, one would happen to play an important role: Field Agent Madeline Zargosty.

This is her story.

This story is entirely pre-written, and will have one chapter released per week. If you want to read it all ahead of schedule and get access to some premium-exclusive bonus content, the entire book is available for purchase; links to the appropriate storefront pages will be posted at the end of each chapter.

This story is also being posted to Scribblehub.