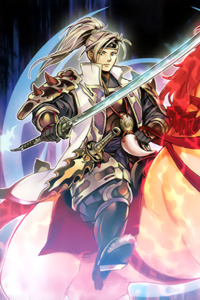 The Shiranui swordmasters are the eternal enemies of the Mayakashi Yokai, demons that disguise themselves as humans and utilize magic that confounds the hearts of mortals and yearn to throw the world into endless night. Those two are archetypes from the Yu-Gi-Oh card game, and they contain a self contained lore that is told only through artwork. This is a written version, depicting my take on the story of the generation-spanning conflict between the Shiranui and the Mayakashi, attempting to fill in the blanks that couldn't be filled by the card art themselves.

As with every story, it starts at the beginning, with the origin of the very first master of the Shiranui Style and how he came to dedicate his life to battling the Mayakashi, and aiding his descendants even after his own death. To them, he is known as Shiranui Sunsaga. In life, he was merely a young man, blessed by the sincere prayers of his parents for a brighter future, who took it upon himself to fight against the demons who would stop that from happening. This is the story of Sun, the first Shiranui.