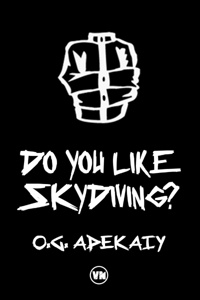 It’s 2050 something and at the verge of a new era, the first well known superhero is rising to the peak of his career. His presence is impossible to be ignored. Criminals in London never feel safe. Countless lives are saved.

“Cleansing crime,” he calls it.

Boasting whacky superpowers and a chilling costume, he can be found flipping across the skies, sometimes laughing so cheerfully that it’s contagious.

Psycho the Superhero is his name, and even the toughest of criminals with their big boy pants cower in terror after hearing a certain catchphrase…

The story can also be found on our main website.

This is a story that's definitely worth reading! Only a couple of chapters have been released as I'm writing this review but they do a great job at introducing you to the characters and establishing the setting.

The story presents an interesting 'man vs self' type conflict through its main character, Cadell. He's a really entertaining protagonist that I'm already invested in after just a few chapters. I really enjoy his dynamic with the voice. He also has cool portal abilities that he uses in some pretty creative and entertaining ways.

It's probably very difficult to write a superhero story in a medium with no audio and no visuals, but despite this, the writer still manages to make it interesting. I have a very low attention span and have a pretty hard time paying attention to stories in this medium. I usually just end up getting bored and skimming the lines but that wasn't the case with this one. It managed to hold my interest throughout. The action scenes are very well written. Both detailed and easy to follow. It's very easy to visualize them.

It's been great so far and I'm excited to see how the story progresses from here! Would definitely reccomend.

This series is very promising so far, a very likeable and fun main character with a lot of intrigue around him, I find myself very curious about his full power set and about the source of the voice in his head. The first few chapters were very quick and enjoyable short stories that established the setting and characters very well, so I look forward to seeing the meat of the story. Overall a very promising start.

Don't hesitate to give this story a shot, it is well worth the read!

Superheroes are best represented in illustrated comics or animated forms, however, "Do you like skydiving?" offers an outstanding use of writing to show you exactly what you're reading.

This medium may not be the most favorable, but this writing has allowed me to feel a connection with the personality of our protagonist, Cadell. The style of writing is intriguing to read as well as the character descriptions. The author has no problem writing out the actions and quality of Cadell. He is certainly a character you will undoubtedly have a large interest for and want to learn more of what he is capable of.

Very easy to follow and still offers the complex details of powers and the thrill that gets you hooked.

There are also references to real life media that help further immerse you into the setting. These caught me by surprise and Cadell certainly has some excellent choices in anime and manga.

Even with the small amount of chapters where it stands currently, this is a great foundation for the events that will roll out in the future.

Excited for some more chapters and hope to see this story develop more!

Do not like skydiving, but I love this story

If you like superheroes, you should definetly read this. And if not, at least give it a shot.

At this point of me writing there are only a few chapters out, but the main character - Cadell - already shines throu as quite unique and intriguing in just a couple paragraphs, as well as setting good groundwork for future chapters.

Mysteries are well set up, especially sorounding the main character.

And the dynapic between Cadell and the voice is fairly entertaining and refreshing, whilst his friend Elijah helps grounding the story a bit.

It is also really easy to read and provides a good bit of comedy and levity ,whilst also going into darker territory, without feeling forced or out of place.

Oh and if you like references to other media, other storys, especialy manga/ anime like berserk and one piece are mentioned sometimes.

This also serves as a part to building some of its characters and helps humanizing Cadell.

Overall a great start, that makes me pretty hyped for upcomming chapters.

Really interesting premise and character. I love that the author is not holding back from using the full extent of his powers. The use of the portals to achieve terminal velocities is insane. Moreover, an interesting superhero and the whole concept of the Voice is very intriguing. Its fun, gritty and overall thrilling. Can't wait for more!

DYLS is basically the lovechild of DC’s Joker x Miles Morales’ Spiderman, with a dash of Deadpool on the side, but with its own identity, style, and charm.

After following the whole VN movement for a long while now, for people new to the series, “Do You Like Skydiving?” is a web serial, set some time in the future from the original “PSYCHO” novel, and retains a lot of characteristics from this with new character developments and storylines.

Unlike some superhero stories, the main cast of characters have flaws and deal with real life issues such as mental health, that make the whole cast more relatable.

Under the backdrop of a future dark London rife with crime, the main character (Cadell Akindele) continues his vigilantism in hopes to “cleanse the city” and is still looking for redemption after the traumatic events that happened to his family in the first book.

Alongside the deep story with real world influences, the effortless comedy and relationship between the characters feels very natural and I am looking forward to how the plot will develop in future releases.

Cake and Skydiving. What more could you want?

If you love anime, superheroes, and looking for diversity, you need to read this book! It has everything. And chocolate cake ;)

The story starts off with Cadell during his daytime watch, fighting crime while trying to maintain a sane life. Though that's hard when the Voice inside his head constantly wants Cad to murder everyone.

Action fills the pages of this story, which is difficult to write especially for superhero books, and the author has pulled it off well. The writing not only brings the story to life, but keeps the reader engaged. Each chapter brings the us closer to the world and we learn more about who Cadell is.

Most of the dialogue (inner and external) shows Cad joking around, until we meet Elijah, Cad's childhood friend. We start to see a vulnerable side to Cadell. A more human side. Though Cad's accepted his fate as a superhero, he still lives with his past regrets. Which is very relatable to me.

It's also rare to find a story these days with little to no grammatical issues. I found very few. It's clear the author put his heart into this story's world and characters. This book is a truly a hidden gem. So if you haven't read it yet, I recommend checking it out! You won't be disappoointed.

A promising read! It reminds me of some fantasy-hero books I've read before, but at the same gave a feeling of reading straight from a comic book. As each chapter unfolds, it makes you intrigued enough to know what's coming and see what Pscyho the superhero is up to. I also think it is such a creative idea how Psycho the main character is somehow unwelcomed at first by the public due to his superpowers but at the end of the day, he still wants to save and help others and stand true to what is right for him. Also loved the humor as well as how cultured the characters were in terms of mangas and anime.

I can't wait to read how he is going to nurture his superpowers considering it may be at an early stage and how his dreams would turn out in the future chapters to come. Also liked Cadell's personality so far and his friend with the way they vibe with each other as well as how there may be a psychological factor related to his powers and excited to see how readers may be able to relate to him. Because superheroes are people we all look up to, yes?  A fun character indeed! And definitely worth the read!! Recommending this one to those who may come across this novel!

Contrary to my review title, if taken literally, I've never gone skydiving... (I bet it's genuinely exciting though.) However! diving into this story, I have no regrets! Not that there were any, to begin with, I read it from the author's original site, and now seeing it here, I'm hoping that it will be given many chances since the premise is intriguing (I mean, come on, the ability to open a portal for cakes, need I say more? but in all seriousness, I bet it's exhilarating punishing a wrongdoer in the open sky and seeing the panic on their face); the characters + their dynamics are so far entertaining (what's the origin of the voice? love Elijah already, and, whoo-hoo, anime & manga are mentioned as an interest); and lastly, with O.G. Adekaiy's writing style and imagery skills, you've got everything playing in your mind's eye instead of on panels. Capturing the action typically displayed in a comic style is a challenge that this author executes seamlessly and in such short chapters! My grammar was terrible here, but Adekaiy's was great. I had a lot of fun reading and I hope more others do too.

Wishing all the best to the author and this story!

I guess the second chapter is my favorite, casual conversation is one of the thing that seems really hard to write but it's done well here.

I guess some would say the language isnt formal enough but it makes the dialogue feel more natural, plus they talking about One Piece and Vinland, this is just an instant W.

I just love Cadell man, he reminds me of Deadpool whose my favorite Marvel hero. His suit and powers are so cool, i really cant help visualizing it all in my head, mostly thanks to your writing tbh. I promise you as soon as my skills get good enough im drawing this nigga.

So real good stuff overall, no one thing i dislike and a whole lotta things i love, cant wait to read more.