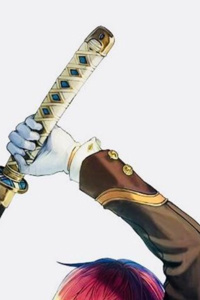 A boy named Kai, half and half, devils child, the cursed one, was forced out of his home of Raibarumura. At just fifteen, a man takes him in, and for five years trains him in the art of combat, theft and assasination. But one day, his life changes when he gains The Blaze blade...

The World After will be updated on Saturdays.

Was nice but could be better

Reviewed at: The Real Story Begins

Aight, I finished reading and I have the following qualms:

The style could use some work, it's kind of all over the place. The narration has some never ending sentences that I can't follow for the life of me and there is little to no description. 4 chapters in, I can't tell how anyone looks like, nor where they are... Dialogues are okay, arguably the stronger point of the story, but sometimes you just sneak in some very weird exposition in and it just sounds like the character breaks the fourth wall to speak to the audience.

On the style aspect still, when the characters speak they apparently don't have any tone. They never 'bark', 'spit', 'waver', 'mutter', 'mumble', 'roar' they just 'say','reply','ask' or 'question.' It's hard to get a read on their attitudes. Furthermore, you tend to overexplain the situations at hand, making the narrator feel more omniscient than he actually is (1st person narrators are almost never omniscient, save for some limited cases)

Plot-wise...Naruto meets Romeo and Juliet? It kind of feels like a perfect mixture of these elements, down to the characters and plot points themselves. As for the progression, the choice to have the first two chapters feature alternative timelines wasn't the best, it really broke the immersion. Plus, I'm not sure what the first arc even is, it feels like there is no clear goal or purpose in mind for any character.

As for the characters, none stand out in particular. They are very much tropes come to life, just put in a slightly altered context. Their individuality really struggles to shine through and just because Kai has that slightly sarcastic tone and boneheaded attitude, doesn't make him any less different than any other YA protagonist.