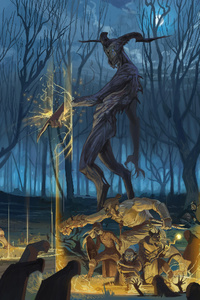 Reincarnated as a Nightwalker

After reading a thousand light novels about reincarnation Zhang Xia finds himself in the same situation all those protagonists faced. This story is about a guy being reincarnated into one of the strongest undead in existance. A Nightwalker
https://www.patreon.com/xkarnation £1 for all advanced chapters!

Poor sentence structure and glaring plot holes litter every chapter. Even with a hefty grain of salt it is hard to detach from mistakes and lazy writing to enjoy what little plot there is. As this is a self insert story claiming to do it "right", it falls into nearly every one of the normal 'trash tier' tropes it claims to get away from.

I give it 2 stars because it is at least readable and doesn't appear to be a poor translation on top of it all. Think of it like a greasy, stale hot dog on a very hot day, it's better than nothing but you regret eating it just the same.

if plot holes could be filled in, and less ego, the story can drastically improve.

The writing style is a tad rushed. Very slice of life and a fast read. Not to be taken seriously if your favorite category is intense drama.

The plot is nothing new, it's been done time and time again. In order to be that four leaf clover in a field of three leaf clovers you need to have something unique. This story is not a four leaf clover. It has cliche scenarios and plot devices, flawed reasoning from the MC that contradicts his own actions and are not rooted in human concience. The MC is a modernized male from Earth. He still thinks and speaks like a human, obviously still holds onto his humanity, yet is desensitized to blood and gore the day he arrives in another world. He has little to no reaction from becoming a ginormous shadow monster that kills to live. You would expect some sort of reaction from someone that still holds onto their human values, but no.

There are sometimes multiple mispellings, incorrect sentence structures or missing commas in a single chapter. Abeit it is readable and something you can look past if you thoroughly enjoy the story.

There has been little to no character development aside from the prologue, and zero introspection or self reflection from the MC. I would imagine turning into a creature that is completely different, instinctually and physically, from your previous form would be cause for some sort of reaction. All I can say is that the MC so far is, plain. I can see two different directions this story can go:

One(the more obvious direction, considering how it's been setup);MC and sidekick stay together the entire story, and it eventually devolves into a romance.

Two; Sidekick girl dies, This could lead to some actual character development and open up more roads of opportunity for our MC.

Giving a lead character a plain, boring, seemingly only there to be a potential love interest, as a sidekick is just lazy writing. Especially this early into the story.

EDIT: As of chapter 15, we have many new characters that have been introduced. I still feel as though our main cast needs more attention on their own development.

This feels like a fanfiction written by a middleshooler that read Solo Levelling and Overlord who then decided to mash the two stories together without any of the flair, grammar, worldbuilding or character development of the two.

Hello, good day to all who may stumble on these words.

As the synopsis says it is about a guy reincarnated in a op monster cool right? (the monster is cool at least).

The mc himself says before getting reincarnated that he will do better than those others mc. That's good, it will be interesting!

HAHAHAH NO, you got tricked!

Third chapter he finds a woman (runaway slave) tells her like all others monster story that he is in fact human and from another world!

Then everything is cool as a bean, they talk like friends, he is... aroused by her, and normally you will hate it :)

The mc is now clearing a dungeon Wow isn't that the first time I see it?!

Him being a monster adds nothing to that story, he is just op nothing more, no change of personality or cravings.

This story is a facade.

The grammar could be worked on too, I'm don't have a good English and yet I saw some errors.

1star for the look of the mc.

You liked the rant? Well I hope so, have a good day and take care :D

Chapter 1, mc reincarnated as a technically world-ending monster, met a goblin and suddenly 100% confident that there will be a tribe of them nearby. Proceed to massacre the tribe and revive the goblins with his necromancer skills.

Proceed to 2-3 short filler chapters about how a slave girl escaped. Mc, in his monstrous form, met the escaped slave girl (typical, I know). No prolonged suspicion from both sides, and with trainwreck of dialogue exchange (with some are in one paragraph), the two decides to form a party. Because, and I quote, "aren't you lonely? Let's be friends."

Voila! These two get along just fine.

So yeah....sorry to say this, but the story does not match with MC...like at all.

It's super cringy too.

Great story in need of an editor and better timeli

Well overall the story is interesting, the way the author switches perspective, doesn't use commas and jumps around the timeline at seemingly random intervals is unbearable.

Well the concept of the characters is interesting, they are hardly developed and the lines they say feel rushed or forced less of them speaking and more of an undeveloped draft.

I enjoy the plot concept however, it is moved along a bit too quickly for my taste.

The grammar is really bad I'm just going to leave it at that.

The story that certainly does have some flair and some overall interesting portions. There was definitely a point when I was thoroughly enjoying the story however, that point is long past. Once the author starts getting around povs without saying when and started muddling up past and present tense the story took a massive nosedive that needs a full restructuring.

The author can improve his story by doing the following; completely rewriting the earlier chapters, reordering the chapters so that there is no need for flashbacks that could have just been an earlier chapter and would have made more sense like that, finally making it more obvious which character is speaking.

Author if you read this don't take it as me being mean, I genuinely want you to succeed here but you need to fix these problems with your story before making more chapters.

Worth! Reading. give it a couple chaps.

Ok, now that I've trolled the author with the literal first words of his story...

Not a terrible little story.  Yes, it has OP hero and no real plot.  But it's coming along and turning into base building and I think if the author continues with the story they may actually be able to make it into something.  The author has fought some critiques on things, but I hope that the author uses that to grow instead.  I mean, what else are you supposed to use bullshit for?  Reviewing, growing, and hopefully adapting, I hope this author turns this story even better moving forward.

Don't be too harsh

I'll preface this by being honest: this is not my cup of tea. That's not to say it's not enjoyable, because it's alright for what it is, I just wouldn't expect miracles.

It tastes like a new/inexperienced author's work, but I don't believe it deserves the abysmal rankings other people have given it - hence the bumped-up score. This work is about average.

Style: it's quite inconsistent in the beginning, but seems to have situated itself firmly in dark, absurd comedy. It's immature, but in small doses it's actually quite refreshing.

Story: nothing remarkable, but it's solid. Guy is Average (with a capital A), if a bit childishly conceited, gets thrown into another world with rather more introduction than other stories of its ilk, settles into his new life, works to make his situation better/make the most of it. Very cast iron, straightforward, simple. An excellent choice for a new author!

Grammar: also inconsistent. I get the idea the author wanted to get the prologue over with as soon as possible, so it's quite lacklustre. Afterwards grammar issues become negligible unless you're slogging through it, or if the author's trying to skip over it. Minor issues here and there that don't really affect the - or rather, didn't affect my - reading experience. Maybe a little rushed: like someone had a bunch of ideas and wanted to go over them immediately.

Character: eh. The main reason I think the author's on the younger side is their characterisation, which is admittedly quite flat. But while flat, they're solid and consistent. Character development did happen, though it wasn't particularly enthralling and was quite sudden - speaking mostly about the first girl and the second girl, here. I haven't read enough for them to have had a large impact on me. It feels like the author tried to do the same for the protagonist, but it kind of just... regresses, to be honest. Stereotypes and archetypes exist for a reason, I suppose.

Conclusion: immature book. Somewhat refreshing, not much to look at. But it's going strong, so good luck! Strive to improve, constantly!

A quick rise to power

This is a very fun story if your looking for something casual with a OP Main Character. There is no conflicts with is original and curent species that follows Xia for 20 chapters. He just quickly uses his power and deals consequences in either the most efficient or fun way.

I like how, while he is good, he ain't no saint or super destroyer even with his power set. He's just happy to live and do what he wants. Looking forward to the future of Eden.

liking this story so far (CH 25) the MC is easy to understand and if ypu like OP MCs this is a great one. MC wants to create a forest? done, he is completely OP and i love it. only problen i find is how erratic and fast pace the story is. I personaly would not have minded if the story slowed down  a little bit but i am still enjoying it.