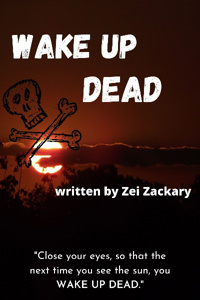 I was standing just in front of the train which was walking slowly on the railway road and was coming to a halt. Prakash was beside me as we watching the train stopping in front of us. It was an ordinary Indian blue train and it had brown rust on it. “Kartik! Prakash!” Someone called us from behind and we both looked behind. It was Radhika, and on her right and left were Richa and Sonia respectively. She walked towards us and stood in front of her, her eyes filled with determination. “I came here to give a proper farewell on such a dangerous mission.” Then, she leaned somewhat forward and said, “… but you look so funny in this casual kurta-pajama that I can’t resist but laugh! Haha!” She started giggling in front of him. She covered her mouth and tilted her head away.

“What the hell, Radhika. This is your new leader!” I sarcastically replied. “You can’t even do customs properly.”

“Pfft!” Everyone laughed. Prakash said, “Anyhow, Radhika, you are absolutely correct, in a way.” He tilted his head down and looked at the pajama which was kind of loose than other normal ones. “It’s actually looser than usual ones.”

“Yes,” Kartik replied. “I like loose ones, that’s why I always take some three-four bigger sizes.”

“That’s something we can expect from him,” Radhika said. “That’s why he always wears pairs of trousers and no jeans.”

“I’ve had enough experiences with them in colleges,” I replied. “Can’t bear them now.”

“He can’t even bear a tight pair of pants, and he taunts as he can literally bear the worst torture in the history of mankind,” Prakash commented. “I mean, c’mon man! I’ve been telling him for over years. Now he’s gonna stand out in front of everyone there and--”

“Stop it, for damn’s sake,” I was kind of serious.

“Prakash, it was not funny,” Radhika supported me, but soon backed out. “But, it surely is correct. We needa do something of this ‘tight-pantophobia’ of his.”

“Someday else,” I tried to stop this all. “The train is leaving for now. Prakash, get in.”

“Hahaha! He looks so damn cool when he’s angry, isn’t it, girls?” Radhika said as she turned back towards Richa and Sonia, who were busy in talks of their own.

“So, did you actually see yesterday’s episode?” Richa asked.

“No, was busy in some work,” Sonia replied.

“You know what, Tannu runs away from marriage! Now, the main suspense lies where she would spend the night. Moreover, people want to see if the couple will ever reunite again and…”

“Uh, let’s leave them up for now,” Radhika dejectedly commented.

“That’d be the best of all,” Prakash said. “I just don’t like people who like typical Indian drama serials. It’s all filled with brainless crap.”

“I know,” Radhika said. “Anyways…” She turned back towards the two. “Don’t do anything useless and make sure you both come back alive, okay?”

“Yep, because whenever we go funny, you’re the only one to be targeted,” Radhika said.

“Moreover,” She turned serious again. “If you think anything is going to turn dangerous anytime, just come back, okay? Just. Come. Back. No second thoughts, because I know that the second you start thinking again about this, you’d never come back.”

At this, I was speechless. “She’s right, probably,” I gulped and thought. I replied, “Don’t worry about us, Radhika. Don’t make us feel like kids at the age of twenty-six.”

“Yes, you’re twenty-six, but still you become a ten year-old when it comes to fighting, explosion and all.”

“You do, Kartik.” There was a second’s silence between us after that. Not because I was guilty or something; it was a type of silence when a topic ends. After a second, she said, “You should go. Happy journey.”

“Thanks a lot,” Prakash replied.

“Thanks.” I turned back towards the train’s entrance, and so did Prakash. I walked towards it, put a step up on the train’s stairs, and stood up. Prakash followed me and we both got on the train. It suddenly started running. Prakash turned back as the train went away and waved to them. I didn’t turn back. Instead, I walked inside in search of our seats. I stood in front of a seat, checked the number, and then checked the number on my ticket. Confirming that it was our seats, I walked in and sat. Prakash soon walked in. Noticing the backpack on my lap, he kept his bag on top and sat in front of me. “You didn’t wave at her, Kartik. Why?”

“Actually,” I replied. “Now I have a reason to return here, because I didn’t give her a goodbye.”

He sighed. “Don’t worry, pal. Everyone is making a big fuss about it, but you and I, both know that it’s not gonna be a difficult task. We got a tipper, and we’re going there to gather some information. That’s it.”

“Why would a tipper call me to his hometown?” I asked seriously, glaring outside the window. “Deep down, we know this too that it can be a part of TES’ sinister plans.”

“Yeah…” He casually turned leftwards towards the window of the train and looked at the city. There was a minute’s silence between us when he suddenly asked, “By the way, what’s the plan?”

“Oh yeah,” He replied. “What’s the method of making a coffee?”

“I don’t know how to make a coffee either, pal.”

At this, he opened his eyes wide and said, “So how will we make a cold coffee when we reach there? It’s gonna be so hot there.”

“I know,” I replied. “But I can’t help but search for a recipe up until now.”