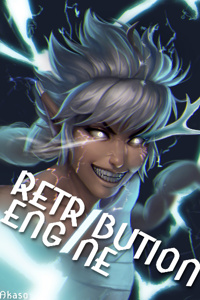 "The War of Fog is over. Every major city is under occupation. Now we prepare to take back our home."

The world's great heroes have slaughtered one another for the ideals of their countries, but the world keeps moving.

The industrious nation of Ikesia lost the war yet it refuses to fall, shielded from further invasion by the impenetrable Blackwall. Its leader - the Sage of Fog - has disappeared, yet his influence is still felt everywhere, his plans and contingencies still in motion - even the Blackwall is said to be his last, desperate creation.

New heroes have begun rising from the war of fog, and there is more need for them than ever. A towering foreigner has emerged from the desolate Exclusion Zone. She aided three disgraced soldiers in returning to their homeland, found love with one of these three, and then went on to play a pivotal role in neutralizing a hive of locust-men that had infested an ancient dungeon and now threatened to devour the last sovereign city-state of Willowdale.

In doing so she exposed that the dungeon's infestation had been a plot by the so-called Divine Emperor to continue the war through terrorist cells even after its official end, as well as an attempt at using the dungeon core's eventual demise as a beacon to traverse the Blackwall.