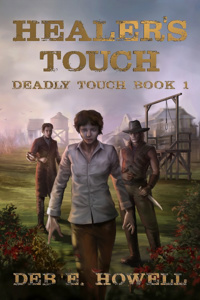 Deadwood meets The Vampire Diaries in this tale of brother versus brother and blood-magic set in a gaslamp fantasy world.

Llew has a gift. Her body heals itself from any injury, at a cost to anyone nearby.

Llew’s father disappeared when she was eleven, leaving her orphaned, as far as she knew.

Since then, Llew has learned to survive the streets of the gold-mining town of Cheer – full of opportunistic men and desperation. It’s a hard existence made tougher when her so-called friend accuses Llew of murder, sending her to the gallows.

Llew’s Aenuk ability to absorb life means she doesn’t stay dead for long, but she does leave a trail of death behind her.

Escaping the hangman’s noose sees Llew fall into the hands of Jonas: the man with the knife and the Karan power to kill Llew’s kind. If Llew can nurture the attraction he has to her, maybe she can keep that knife from her heart.

But lurking in the shadows is Jonas’s half-brother, Braph: the man who has learned to combine Aenuk and Karan powers into infinite and addictive magical potential.

Healer's Touch is a fantasy novel flavoured with a wild west setting, steampunk-like technology, enough romance to draw you in, horror to keep you hooked, and just enough sex to keep things spicy.

The story continues in Warrior's Touch and concludes in Magician's Touch.

I personally found the summary rather misleading. Admittedly, I have no idea what the Young Riders is, but based on the comparison to the Vampire Diaries, and the general vibe from the rest of the summary, I was expecting a pretty standard fantasy story with adventures and flashy magic, probably pretty boring, but at least relatively high quality given that it's been published on Amazon.

Only my "high quality" assumption was correct. The grammar is flawless. The author writes vivid descriptions of the scenes without bogging the reader down with extraneous details, and generally makes the story feel very real. This is, in some ways, unfortunate, since the story so far has been hella depressing and, in some places, pretty traumatic (although the author does a good job with content warnings, at least). Worse, the traumatising stuff is spread out across lots of small incidents, and characters' memories of the big ones, so it's always lurking in the background, even in the happiest scenes. My point is, this is an emotionally taxing story and may not be what you're looking for on RR, but it's well worth it if you're up for it.

The plot is much more character-focused than the typical fantasy novel, with complex interpersonal interactions. I also found that the worldbuilding was above average; the politics between countries are realistic and the background characters act like normal, real people with nonuniform reactions and opinions. Despite the character-development focus, the action scenes are still exciting and clearly written.

The only thing I really don't like about this story is its propensity to, like the Vampire Diaries, suddenly introduce a conclusion made by one of the characters with little to no proof or explanation of the thought process, and then consequently treat this hypothesis as a fact widely known by all. Some of this might just be me being a bad reader and missing other mentions of these conclusions, but it just seems to happen a lot.

Also, the story's just so serious, it doesn't really fit as a web serial. I'd advise binge reading it once it's finished, or just getting the Amazon version, rather than reading week by week.