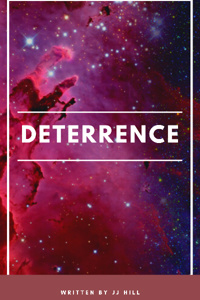 Once he finished interrogating the prisoner, Silas ordered the Admiral and Chi-Young to the bridge briefing room at 1100 hours. Chi-Young had insisted the Admiral speak with him before they went to meet Silas, so they met early, before Silas could corner them.

"Admiral, I hate political officers too, but you need to be careful. You were the one who told me they could read minds."

"That was an exaggeration. I don't know why you've pulled me in here to lecture me, Chi-Young." Allison looked out at the stars through the briefing room's large window.

"Because you need one. Do I need to remind you last time we ran into one you got put on disciplinary record? That wasn't with an officer with half of Silas' tenacity."

Allison's head whipped around. "He strode onto my ship and pulled my prisoner into an interrogation without informing me. I know what's at stake, but if I let that slide he'll keep prying and he'll uncover something that ruins us."

"Then don't give Silas reason to keep digging. This was always going to happen, and yes things haven't gone to plan but it doesn't change the opportunity here--"

"You don't need to tell me. All right." He sighed and shook his head. "I won't do anything."

Right on cue, Silas stalked through the door. Chi-Young glanced over at Allison, but he stood back in his usual place staring outside into the inky blackness of space.

"Admiral," Silas said. "What you have done with this prisoner is unacceptable." Silas spoke with almost a whisper, which only made his presence more ominous.

"I judged it appropriate." Allison didn't turn and face him.

"He's a fugitive from Caxis of all places, have him executed." Silas came to stand at Allison's side and grabbed his shoulder to spin the Admiral around.

"On his own, he's no threat to us," Chi-Young jumped in before Allison could retort. "A husband who wanted to get to his wife, that's all."

"He ran the blockade." Silas glared at him. "That carries the death penalty."

"Silas we're meant to be trying to end the blockade, not entrench it." Allison turned and walked away, his back once again to the Mediator. "How are we meant to encourage Caxis back if we execute a man flying to see his wife?"

Chi-Young sagged with relief. The Admiral had contained himself--maybe this would work out against all odds.

"You and I have very different thoughts, about how to end the blockade, Admiral." Silas clenched his fists, but did not follow Allison.

"I have no doubt." Allison finally came and sat down at the table and motioned Silas and Chi-Young to join him. "Now if this is about the attack on your convoy--"

"Have you traced the ships yet?" Silas interrupted, folding his arms. "I need not tell you how serious this is Admiral. There hasn't been an outright attack on an Alliance ship for over a year, they crippled our ship, dammit."

"We took care of them without too much trouble." Allison waved him away.
In reality the ships had slipped away without serious damage. It wouldn't do to cripple the few non-Alliance ships they had. "An attack like this isn't unexpected now the news about the gravity bomb is public," Chi-Young said. "I spent a lot of time after I first enlisted dealing with dissidents retaliating after we shut the student protests down."

"This wasn't some backwater fool with a beam strapped to their ship. They chased my vessel across four systems. Four! I was trying to make it to the Edinburgh for a vital mission. Where did they come from? Who were they?"

"Pirates? Dissidents? Or even smugglers? Who knows--it is of no consequence, but if it concerns you, Silas, we can check the gate logs to see if it has a record of them."

"Not good enough, Admiral. I want hoppers combing the debris for any trace of where they came from, and I want this ship battle ready in case more arrive." He got up and started pacing around the room.

"Of course." Allison inclined his head towards Silas. "And for your mission you are of course welcome to use the Mandrake."

"I'm not happy, Admiral. I don't trust your judgement, but this is urgent, and you are nearer than any other Alliance vessel." Allison said nothing and instead leaned forward in his chair to put his elbows on the table in anticipation. "There has been an attack," the Mediator said at last.

"On what?" Chi-Young said, heart in mouth.

"A refinery in the Halcyon system." Silas pulled out a tablet from his jacket and slid it across the tablet to Allison.

So it's finally started.

"Am I meant to know what this is?" Allison wore an excellent poker face.

"It's one refinery used to create the materials used in the gravity bomb." Silas looked sour at being forced to give him this information.

Allison whistled. "What happened to the refinery?"

"Ransacked by an opposing force with far greater sophistication than anything seen since the Exodus."

"And what did they take?" Chi-Young tried to contain himself.

"Materials, information, everything. The question of where the leak originated is being picked up by the Phoenix Rises, but we need to ensure whoever is taking this information doesn't get the remaining parts and knowledge required to build their own gravity bomb."

"So you don't know who attacked the facility?" Allison folded his arms.

"It's the work of insurgents, we're sure. The Secretary General's office has just yet to find any proof, or suggestion of which planets are involved."

"What do you want us to do?" Chi-Young said.

Silas looked like he was steeling himself. "The material they stole only gave them part of the picture. It contained references to another facility, where the control systems for the bombs are built. It didn't give a location, but we're worried it's just a matter of time until they find where it is.

"For obvious reasons we can't send any diffusion messages about this, but we need to shore up the facility. I want you to be in the system waiting; the facility will signal if there is an attack."

"The station is in the Candover system, a step away from the Lanes. You must prepare some excuse to stay at the station--emergency repairs or downtime, I don't care. I order you to set a course there, immediately."

They'd done it; they had forced Mediator Silas to them, avoided discovery, and learned the system that housed the station they were looking for.

"As you wish." Allison's face was still a perfect picture of calm. "Will you be joining us?"

"Given your behaviour, it's only appropriate that a mediator stays to oversee the operation."

Chi-Young bit back a sigh. They couldn't have it all their own way.

"Naturally," Allison said and stood up. "Well I will leave you in Captain Chi-Young's capable hands to get you settled in. Good day, Mediator Silas." Allison resumed his position staring out of the window into the vacuum beyond.

"This way, Mediator." Chi-Young stretched out an arm to escort Silas out.

They walked in silence across the bridge and into the lift that would take them to Silas' deck. He couldn't let his guard down, even for a second, but it was hard to contain the sense of relief that overwhelmed him.

Silas cleared his throat and Chi-Young jumped, but the Mediator didn't seem to notice. "You need to be careful, Captain."

"What do you mean, Mediator?" He couldn't know about Allison, not yet.

"Admiral Allison--his career is on a downward spiral. You are a great officer, your record speaks for itself. Just say the word and I can have you transferred, maybe given your own command as part of my task force."

Of all the things Silas could have said, that was the most unexpected. "I..."

"You don't have to respond now, Captain. Just think about it."

They didn't speak the rest for the rest of the journey. Chi-Young was left to wonder how he would turn Silas down without bringing any more unwanted attention.

Bio: JJ Hill was born and lives in Croydon, UK with his wife and works in London as a Civil Servant, writing whenever he can around work and looking after his toddler. JJ Hill is passionate about all things science fiction, including The Expanse, Star Trek, Star Wars etc.

He writes a regular blog at http://jjhillwrites.wordpress.com, and is active on Twitter @jjhillwrites.