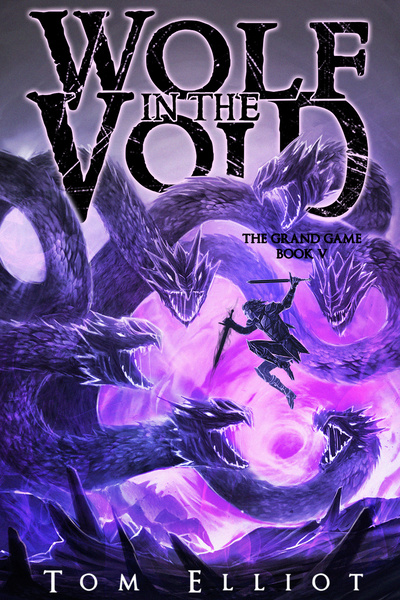 Book 4 chapters posting at the moment.

Book 1, The Grand Game has been released: ebook and audiobook!

Book 2, Way of the Wolf has been released: ebook and audiobook!

Please note that the full story is currently available on royalroad.com.  But if you are interested in reading the ebook version, you can find the story on amazon too.

Reviewed at: Chapter 114: Adding to the Mayhem

The most recent chapter finally did it for me.  The MC fights an enemy that has a massive level advantage on him - he's done this frequently and won, but he's a stealthy type and all of these wins have come from him getting in sneak attacks which I'm fine with.

The most recent fight, though, the enemy sees through his tricks, resists all of his special abilities and still dies in moments.  It broke my immersion too hard, too completely.

This story doesn't suck.  Much of it is well written, but as usual in this kind of wish fulfillment story, the MC makes all kinds of terrible decisions and never suffers any real consequences for them.

Maybe someone else will like this, but I can't read it anymore.

Had high hopes but its just okay.

Reviewed at: Chapter 051: The Rich and the Poor

story doesn't feel organic to me, if that makes sense. Also MC along side every other person in the book playing the game was mind wiped, yet every other sentence it seems like the author brings up that the MC "knows" or "remembers" what type of person he was etc, just ruins my emersion. Though I will give credit the MC questions if the master is telling them the truth when he speaks to them, the author does that well.

Other notable stuff the book is first person...

Skills and system stuff is average for the site, but I see potential for it to get better.

The grammar was fine and the style was ok. The first arc was actually good, with an interesting setting, concept, and system, but that only makes the following arc all the worse.

In the first arc the MC is a very distrusting and selfish individual, spending most of said arc on his own. It allows him to accomplish some near impossible things while still staying within the worlds realm of belief. And then he enters a new part of the world in the second arc where that just goes out the window for no reason. In under a day he starts trusting every tom, dick, and harry he meets to the point of quickly equipping and leading an army against a rival faction he didn't need to fight, fully trusting in the leaders of said army he met only hours ago. They seem to win so easily even he finds it suspicious, then despite this goes into a trap, gets taken out by a spell that was super op compared to anything else seen so far, gets most of his army killed after its revealed one of said army leaders was a traitor, and then swears vengeance despite, again, only knowing them for a few hours, at which point the story descends into even more unbelievable shenanigans. And this isn't even going into how many plot holes there are in how this happened, of which the comments section pointed out tons.

Basically this story starts off making you think its gonna be about a cool, ruthless, untrusting assassin type MC, and then quickly jumps off the deep end into your usual bs, friend making, idiotic, and unbelievable MC that is the exact opposite of the type of MC originally shown. It was seriously depressing and enraging watching this go into the gutters, and I implore anyone reading this review to not waste your time with this book.

P.S. Oh and lets not forget how the author purposely split chapters to be smaller just to get more views to get higher in the trending list. Or how this obviously isn't their first account on here which is highly suspicious and shady, as there usually isn't anything on this site people need to hide.

Reviewed at: Chapter 229: Running with the Pack

I started reading this series on Kindle Unlimited. The first book was the only one available, but I greatly enjoyed it.

I can't think of the last time this series has had any grammatical errors, and the author regularly uploads. The novel is pretty fast paced which is different from most slow burners on royal road. There is a lot of world building, and I expect anyone who will start reading this will like it.

A well written set (and more) of novels

Both grammar and the story arcs themselves are enjoyable to read; moreover the characters act realistically (or as well as I can expect people to act in their situations) and do not behave as simple puppets to propel the plot. I enjoyed the story so far and will be back once the author has updated it further.

This novel should be called 'Catch me if you can'

This has reach a limit to my patience. I really give it a chance to improve but it has been downhill for a while. The author can't avoid the same plot again and again. So every time the mc farts some god will take offense and swore revenge. With armies, assasins and bounties. Again. And again. "Game message: You have slained the assasins sent to kill you. You have earned their masters ire". What?! Are you kidding me? Ugh.. plus the lack of intelligence of the MC and all the plot armor and power imbalance in the world to balance that... Book one was great. Book two was good. I regret my time reading the 3rd with all my soul..

A reasonably well written example of the genre

Reviewed at: Chapter 153: A Toxic Interrogation

The Grand Game is a solid example of your typical litrpg. Whilst not spectacular the solid grammer and varied language makes for an enjoyable read that flows easily.

Furthermore, the presence of clear 'books' indicates that this story has been planned to some degree and is likely to have an ending avoiding the typical web novel problem of degredation over conclusion.

The world has clearly been planned and its introduction whilst slow is engaging.

In terms of issues, the story is slow which likely makes it less enjoyable for those who dont know consume chapters on mass. Furthermore there are certain decisions by side characthers which feel 'off' and certain laws of the world which seem to be inconsistent. Without going into spoilers examples of this include 'the arbiter' and what exactly they allow/punish as well as 'the master' and his agreement with the MC.

All in all a solid read.

Reviewed at: Chapter 130: Another Task Down

This series (well the first book) was my first litrpg, so I'll probably always have an attachment. I thought the author stopped writing and was so glad when book 2 was released. The second book (from what I've read) is much better, plot-wise, than the first. Sometimes the "MC defeating enemies 20, 30+ levels higher" thing is a little strange, but I binged it all in one go so it didn't bother me that much. The wolf/mindstalker angle is pretty cool, and I look forward to finding out how that will be developed.

Reviewed at: Chapter 170: A Change in Strategy

The first thing to note in this book is the unique power systems, it makes for a very unique reading experience while not seeming forced.

And the way the information gets out is often more entertaining than an information dump or the like.

And although the book seems fraught with Machinations and Sinister plots, it all comes together to provide one of the most unique blend of Genres, on this and any site yet, it really is one of a kind.

Reviewed at: Michael at the End of Book 1

I havent slept much since I spent the majority of the evening reading this.  Frankly how anyone would give this anything less than 4.5 on any of the criteria is surprising to me.  At first I saw some of the reviews and i wasnt sure what to make of this story.  Now though I am so glad I didnt listen to them.

This story is an easy 5 for me.  Especially, if we are considering the quality of the writing we sometimes find on this site.  I would have no issue buying this book.  I read book one on amazon and very much so enjoyed it.  I'm not sure if anyone will see this but I highly recommend you read it.  The moment the next book comes out I'll be snagging it and reading that too.