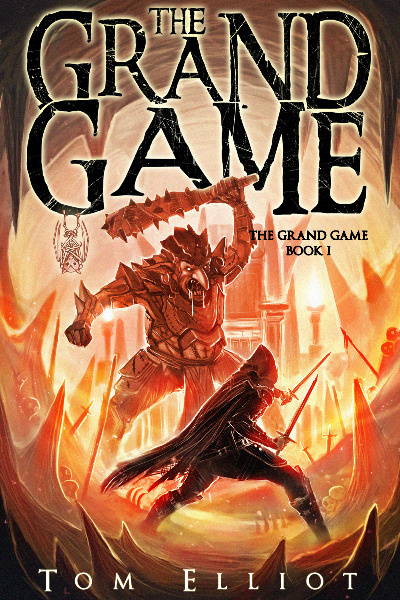 Confounded, I stared at the Master. “What is the Grand Game?”

“All in good time, my boy,” the Master assured me. “But come now, you were the last. The others are waiting.”

“Others? What others?” I asked.

The Master ignored me. Turning around, he floated away. The small circle of light that had illuminated my surroundings moved with him. In fact, the light seemed to be centered on his figure, but I still could not make out its source.

With the Master’s departure, the encroaching darkness swallowed me, leaving me with only Stayne’s glowing red eyes for company. “Damnit,” I growled.

If I didn’t want to be stuck alone in the dark again, I had no other choice but to follow the Master—as he likely very well knew. Cursing whatever fate brought me here, I hurried after his departing figure and the comforting globe of light surrounding him.

With Stayne by my side, and the Master floating before us, we traversed the darkness. I tried questioning the Master—and even Stayne again—but both steadfastly ignored me. Left to myself, I turned my attention inwards and cautiously probed my mind, feeling again for the sense of the entity that had written in it before. But as hard as I tried, I caught no whiff of the mysterious being.

Presently we came to a cast iron door set in a wall of grey stone blocks. The walls extended to my left and right beyond the circle of light the Master cast, and I could not tell how far it stretched. Stayne stepped forward and unbarred the door, and as silently as ever the master floated inside.

The room within was bare of furnishing but was thankfully well lit with torches set all along its four walls. The floor of the chamber was paved with the same grey stones as the wall, and the roof curved high overhead with its peaked center barely visible. Seated within the room were hundreds of people.

Some were human. Many were not.

I felt barely a flicker of surprise as my eyes roved over features that my mind identified as dwarven, elven, goblin, troll, orc, and many more. I knew with bone-deep certainty that besides my fellow humans, I had never encountered the likes of any of the other species in the room.

The thought was unexpectedly comforting.

It seemed that even though my memories had been wiped, I retained some connection to who I was—or had been. I am still me in some sense. It was reassuring to know that I was not wholly a blank slate, that some facet of who I was remained.

At our entrance, the quiet hum of conversation that had filled the room died down and every gaze in the chamber turned our way. Immediately, I noticed an oddity.

Everyone in the room was dressed in the same manner: in white cotton shorts and shirts. I glanced down at myself.

I was dressed in the same clothes too. “Who are these people?” I whispered.

“They are your fellow candidates,” the Master replied vaguely. “Like you, they will be competing for the honor of joining my cause in the Game.”

I glanced at him. “Your cause?”

Once more, he ignored me. Gliding through the air, the Master floated upwards as he made his way to the center of the room where he stopped, hovering high above us all. “Gather around candidates,” the Master said, his voice as soft-spoken as ever, but somehow still reaching me from a few dozen yards away. “The last of you have arrived and it is time to begin.”

Moving quietly, I slipped further into the room and sank to the ground in a cross-legged stance next to a human woman. With her attention fixed on the Master, she did not so much as glance at me.

The Master had fallen silent while he gathered his thoughts. “As the Adjudicator himself has already told you,” he began after a moment, “you’ve been brought to the Forever Kingdom to become players in the Grand Game.” He paused. “But you are not yet players. You are only candidates. Before you can fully participate in the Game, you must earn that right.”

The Master spun a slow circle, surveying the hundreds of faces staring up at him. “And that is why you are all here: to compete against each other for the honor of becoming players in my faction: the Awakened Dead, the preeminent faction in the Axis of Evil.”

There was some muttering at that. Axis of Evil? I thought, feeling my own measure of concern. It didn’t sound like anything good. Nor did the Master’s faction: the Awakened Dead. I wasn’t sure I wanted to have anything to do with either.

“Silence,” Stayne thundered from where he lurked by the door.

The Master chuckled, a grim humorless sound. “I sense your unease and I can taste your fear candidates. Worried are you, that the Axis of Evil is not for you?”

Some brave souls in the crowded room nodded. Instinctively, I held myself still and let no hint of my own thoughts slip. From behind, I felt Stayne’s eyes sweep the room, and I had a feeling that those few who had let their own unease show would soon have cause to rue doing so.

“Make no mistake,” the Master continued, “it is no accident that you have been reborn within the Grand Game in the very heart of the unholy alliance. Your memories may have been wiped, but it is your actions in your past life that brought you here.” He laughed again. “Only the blackest of deeds would have brought you to me. Imagine the foulest thing you could do, and I assure you, you have done it already.”

The Master paused and swept his gaze across the room again. “Like it or not, candidates, you are well-suited to Darkness. It lives and breathes in your souls.”

The Master’s gaze crossed my own. “Understand this: you are evil.”

Author, you got a gift, man. This is great stuff. Your presentation of the opening really hooks readers up.

Actions do not define a person. Fucking dumb master.

Presently we came to a cast iron door set in a wall of grey stone blocks.

I knew with bone-deep certainty that besides for my fellow humans, I had never encountered the likes of any of the other species in the room.

Thanks for the chapter😊

The Master’s gaze crossed my own. “Understand this: you are evil.”

I mean, says him. He's already admitted he is part of the Evil side, that makes it even less advisable to take the things he's saying as the truth.

Time to [Kick A Puppy], I guess for [+Evil] points and gain [Reputation] with the [Master].

Just Some Guy 12 months ago

Hello! I hope you don't mind me pointing out a few mistakes I spotted. Let me know if you don't like this and I'll stick with regular random comments about the story in general. I like this story and wish to help you. :) So give my thanks <3 in reviews, a bit of grammar editing, and such.

In fact the light seemed to be centered on his

In fact, the light seemed to be centered on his

Unnecessary comma on fyrnishing
The room within was bare of furnishing, but was thankfully

I'm really curious, I love how you don't plop an info dump on readers heads, and can't wait to slowly find out more about what's going on. *thumbs up*

The word is also a typo, misspelled: furnishing

a bit of awkward wording here,

It was reassuring to know that I was not wholly a blank slate, that some facet of who I had been remained

not quite understanding been remained. Were you trying to say: a facet of who I was remained? Or in old timy speach whom?

Typo: quite is spelled quiet

The rest of the chapter is fine and any changes would quell the unique voice developing. :3

Evil, eh? They might have been evil but without memories could very well switch to good. Just like a newborn is a blank slate. Actually, babies have a tendency to be good. The Master is going to be sorry he did this I bet ya.

thanks, corrected! And I certainly dont mind the feedback-good or bad :)