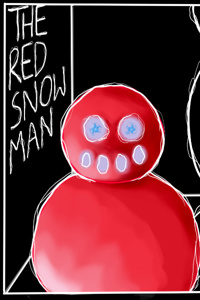 The monster was passing the black bridge over an ocean of yellow slime. It put away its hat and gazed above. There was no sky, just a pitch-black abyss. All of the stars were dead. Presumably, it could've been one of the last places in the universe.

A lone bird flew over the monster's head, it had gray wings and a blue belly. The bird landed, turning into a silver-haired person in a gray tunic, there also was a silver halo hovering over that person's head.

"Where are you going, monster?" - That unfamiliar person asked while sitting in the middle of bridge, as If to block the monster's way. - "There's nothing left here."

"For who? Nobody survived your existence."

"Your hope is purposeless. Face the reality. You can't reject the truth forever. Even you have no such power. The past, the present, the future. It's gone. This is the last of not many places that remain."

"A figment of your imagination." - As the person uttered those words, it turned into moon dust and vanished.

The yellow slime started boiling, a storm was approaching. Occasional bubbles emerged from the sea and flew up, disappearing in the skies.

The monster put on its hat once again, to hide its face, albeit there was nobody to hide it from.

"I don't want this." - The monster spoke, this time in an angry voice.

"I DON'T WANT THIS." - The monster yelled and the seas erupted, forming countless yellow pillars.

The moon dust in front of the monster started whirling, then gathered in one place, first forming a bird, then that person with a halo.

"It's not about what you want." - That person replied.

The monster puffed its cheeks, its lowered head was hidden under the shadow of a hat.

"It never was." - That person spoke, and vanished, this time, for the last.

The monster crouched, hugging its knees with its own arms. It hid its face between the legs.

Time passed... and passed... but nothing would change.

The monster got up, wiped its face, and marched forward. It marched for a long time, until it reached a black castle. Yellow moss was growing on its walls.

The monster hurried inside, checking every corridor and room, but it found no one. The only trace of civilization was a small, handheld turquoise mirror and a single bed. The monster was too afraid to take a mirror and look at its own face. The face that everyone hated, it had to be hideous.

It sat on a bed, then leaned against the wall, in the same position as earlier. It suffered.

Then, there was a noise. The monster got on its feet and rushed outside. It looked and looked everywhere, but couldn't find what produced the sound. It came from somewhere between the moss, so the monster started combing through it, just to find a small cicada.

The monster smiled with its sad smile, as it held the cicada in its tiny hands. - "You're my only friend now."

But as the monster spoke those words, the cicada moved its wings, then flew away, and was going who knows where.

"No... no..." - The monster uttered, resigned and on a verge of fainting. It dropped on its knees and hid its face under its palms.

Black clouds gathered, whirling around a giant golden orb in the sky. The orb started to open, revealing a large eye, its purple pupil was surrounded by eight dark, golden rings.

The monster felt how the eye is observing it and felt sudden shivers of horror. It had to hide, and the castle was the closest.

The monster got up and run, while a beam of light was released from the eye. It struck cicada, turning the insect into stone, then landed on the ocean and instantly solidified it.

As thunder roared over the sky, a rain of severed hands began to fall. They started crawling, some dug into the stone, like worms, others latched on any object they've found.

The monster managed to hide in the castle. Waterfalls of tears were falling from its eyes, as it clenched its hair and trembled in terror.

The eye slowly lowered itself to the ground, searching in all directions. It turned its eye to the opened castle gate and gradually progressed inside.

It ran away, deeper inside the castle, closing all the doors behind, but as soon as they were touched by the beam of king's light, they were turned to stone and crumbled.

At last, the monster barricaded itself in the bedroom. It awaited the inevitable, barely able to breathe.

The king followed in silence.

The last door shattered. A beam of petrifying light was directed right at the monster.

The monster covered itself with a mirror, and the beam was reflected back at the king.

The large orb turned to stone and dropped down, shattering into million stone pieces in the shape of tears.

The monster, still shaking, approached the remnants of the king. Its face was pale and it was exhausted. It picked a single tear, then shoved it in its pocket.

The monster slowly walked outside of the castle, it cast a wind spell and pushed all the hands in its path aside. As the monster marched past the black bridge, it looked in the sky. Where there used to be the king, now was a round hole in reality.

A loud sound of the ticking clock began. The monster knew it had to hurry, there was no much time left until the world would collapse.

The monster ran, ran, and ran, but a giant pendulum swung from the west to the east, crashing into the bridge right in front of it. Stone bricks flew in all directions, the path was utterly destroyed.

Silver dust gathered around the monster and 'that' person in halo materialized, with wings and a hole in its chest. It extended hands to the monster, but spoke no word.

The monster looked up, with tears in its eyes, and grabbed the hands.

"Could you let me down?" - The monster spoke.

With stoical expression, that person looked at the monster - "No, I'm bringing you where we both belong." - and directed itself to the hole in reality.

The monster's face froze in dread. - "No... NO! Let me go!!! LET ME GO!" - It protested and started thrashing its limbs violently. 'That' person paid it no heed.

The monster couldn't do anything.

But as they got closer and closer to the hole, the monster knew it wanted to live.

The monster cried and bit one last time, severing 'that' person's hand. That person dropped the monster. As the monster was falling towards its demise below, that person only stared at it with its cold eyes and flew into a hole in reality, forever gone.

The monster didn't want to die.

It grabbed its wand and started summoning hundreds of butterflies, then thousands, then millions.

The monster looked around, then got up, staggering on its feet.

Dozens of wooden ships with many mechanical legs gathered on the edges of the stone ocean.

Monster's eyes opened wide, they all were the lifeless wanderers of the Horegon.

The monster couldn't let it happen.

It had no choice.

It lifted its wand and the stone ocean began to tremble, then shake, the stones cracked and burst, forming large waves, which attacked the ships. One by one, ships sunk in the stone ocean, destined to lay in the depths for all eternity.

As the monster fought the ocean with all its power, the hole in the reality grew larger, silently turning all around it into the void.

The monster fought, and fought, but did not notice it and the hole devoured it.

The monster found itself surrounded by just blackness.

It survived, but it didn't know how.

All it knew, was that it could see the world disappearing in a distance. The space between the stone ocean and the monster grew larger and larger, until the other portal to reality turned into a tiny, gray dot.

"No." - The monster tried to utter, but no voice could be made inside the hole.

The monster was stuck there alone, potentially forever.

"No." - It tried to cry, but no tears could be made inside the hole.

It tried to scream, it tried to wriggle, but none would be possible to happen.

The monster would soon cease to breathe.

Then, the monster would cease to see.

Then, the monster would cease to feel its own body.

The monster was left alone, only with its own thoughts, but even they became deteriorating, crumbling, shattering, passing... memories escaped, one by one.

The monster woke up in a bed, like it was all a bad nightmare.

It could feel its fingers.

It could see beautiful sunflowers in a vase.

It could sense a sweet aroma of tea coming from the kitchen.

It could get up and walk.

The monster looked around, it wasn't in its own house. It was way less cozy. Very white. Very cold. Very steel.

The monster moved, it was hungry, it moved to the kitchen, and noticed a piece of cake and a warm tea. It helped itself and slowly ate all that was there, it cried happy tears.

Then, there was a sudden gust of cold wind from the outside. Someone entered through the door. That someone had a white, puffy suit and a helmet.

"Oh, great. You ate my cake. The only cake in the world."

The monster was confused, its cheeks were still full, but it uttered. - "Sorry?"

The person just sat down, in one of the chairs, and sighed. It seemed very fatigued.

"Are you alone here, Astronaut?"

The astronaut looked at the monster, then clicked a few buttons on the device that was situated on the wrist section of its suit. The steel above their heads retracted, revealing a thick glass, behind the glass, were billions of stars and purple twirls.

"I'm never alone. I may not know them, but all my friends are out there... and you know what? One is right in front of me."

The monster smiled genuinely, for the first time.