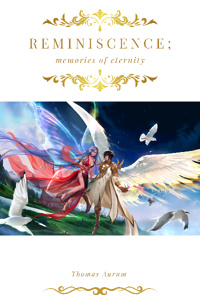 "Being both in love and wise, not even the gods can manage that."

Alexius Valerian Aeternus, a child of prophecy. The chosen prince struggling under the weight of his destiny. Unable and unwilling to walk the path fate has set for him.

Alärielle Eshènesra Silvaris, a living goddess. The divine princess who has embraced her decreed fate. For her, the noblest of callings is to fulfill her destiny, to heed the auguries of the Astrals.

They hail from different worlds. They have conflicting ideologies. Yet, they find in each other what the Universe could not offer them.

But can men or even gods alter what has been written in the stars?

Against the backdrop of a galactic war at the end of time, two people from different worlds—a rebellious human prince and a devout elven goddess—fall in love, with devastating consequences for the Universe.

Hi, dear readers! Thank you for reading my book.

The artwork on the cover is of my original characters—Alexius and Alärielle. This and all the other artworks used in the story were specifically commissioned for this purpose.

You can check out more of the cover artist's work here: Jyundee

I am always open to critiques and comments, so feel free to review my work.

Thank you and stay safe!

A prince with a demon infestation on his hands

Reviewed at: Aria: Chapter 5—Stars in the Twilight

Reminiscence is a grab bag of different genres, and reads like a movie. It's certainly got the budget for it, with gorgeous artwork used in each chapter. There's clearly a large world setup, practically bursting from the writing. The author is clearly excited about everything, and it wonderfully shows through, though it can be too forceful about it at times.

I don't usually read romance novels, I'm not the demographic for it. But it's always good to dabble every once in a while outside. Romance novels can be clearly spotted because they tend to be more dreamlike when reading - a lot of time and effort is spent on description, poetry and ambiance.

More time is spent watching characters in their natural state. Sort of like slice of life. Heavy focus is put on painting the scenes, and showing all the subtle actions of the characters.

If your looking for a bit more action in your romance novel, this one fits the bill.

Style: I'll have to dock points on style because a few cardinal rules of writing are being broken here. Dialog in writing is a supposed to be a simulation of real dialog - only important pieces should be mentioned. Sound effects or mild conversation that should have been cut made it into the final writing. If someone screams, there's a fifty fifty chance the author actually went and wrote it in rather then just 'The wrathguard screamed!'

There's also a lot of exposition, sometimes multiple paragraphs all dedicated to telling what the world is like. This might be more allowed in romance novels however, as it does add to the slow atmosphere. It's charming in a way, it shows the author really likes their world and wants to show it off as soon as possible. But relax! You've got plenty of time to showcase the world.

Story: We follow a prince in a techno-magic future with a demon infestation dropped on his doorsteps. Him and his plucky band of friends share dramatic moments dealing with all of that. On the other side of the figurative universe, we've got hints of a goddess who's belatedly realized she's late to the party and needs to join up. No idea how the two will kick it off, but you all know it's coming!

Grammar: Most of the writing has been clearly picked apart for the right words to describe the scenes, people and emotions, which are the important parts of a romance novel. Some very pretty wordplay that hits that good point of being poetic without trying too hard.

Character score: The big meat of this genre - the story could do whatever it wants, but if the characters are cardboard cutouts, it's not going to go far. In this case, it's pretty clear all the characters have their own stories to tell and history. There's plenty of scenes that show them talking the shit together. Up to now however, the MC has been shown to be a powerhouse with no flaws - a good prince who cares for his people and stands by his soldiers, no matter how lowly on the ranks they are. He seems to lack a sense of agency however - things happen to him, rather then him causing things to happen. So the poor man feels like he's on rails right now.

EDIT: 4/24 - Author has mentioned they're fixing up the prose for dialog that I dinged a star on for style, so I'm modifying my review to include a star and a half back for that. The exposition might be harder to fix, but it's a more minor priority to a romance novel overall. For romance, it's all about the characters