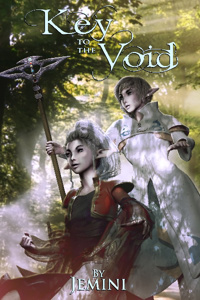 Key to the Void: A self-made isekai

Asaren and Tiaren are the first Elven twins to ever be born. This phenomenon, normally thought to be impossible and only seen in humans, was caused by something unusual that happened at the end of each of their past lives.

In order to save his grandaughter, a man sacrificed his own life to the daughter of the goddess of healing. In doing so, the man and the healing goddess’ daughter had their souls bound together, separating only when they were in the womb.

Blessed with power they obtained in their lives on Earth, the twin sisters will find that life in this fantasy world is anything but kind and what power they have is the only thing that will keep them alive.

I will be uploading frequently until I catch up with my ScribbleHub release.

Reviewed at: Chapter 34: Pragmatism of survival

like the title said, this is one of the rare isekai that have a multiple reincarnated people while not being a generic “group hero summoning” theme (slight spoiler, aside from the two in first chapter there are other two more that we will meet soon early on), if you compare with old version of this novel, a rewrite of 'reincarnated as the goddess's sister' the story is much better paced, after 18 chapters we are on the same level as chapter 40 of the orginal. With just as much story told (it still quite slow for other but the author did at least do time-skip when needed)
The author also do research on the problem with reborn and true nature of meditate + martial art so even if some part is info dump it actually quite educate and not dry, not to mention the mc is a old guy so he is mature unlike most isekai, even though this one is gender-bender (do note that the author do the other way, where the mc ignore/not pay attention to her gender at first but the more later on the problem pile up force her to think more on it. While other tend to do the 'it hard to accept at first but it become easier later', he do the opposite for this case), and character isn't bland, after few chapter where we see more of the mc slibing you will like her with her shenanigan a lot here
Almost forgot one fact, the author also do research on language thing so you will see the mc try to learn thing (you can check my and author comment for more idea), just check the other comment on that otehr site and author reply since it explain the rest.

try to at least read to chapter 25 since the early pace is a bit slow, but still interesting enough and around chapter 18 ? there finally some sign of action going on, and the author plan to do some some skip to where the mc group could running and do something more rather than just being baby (yes, they grow slightly faster and stronger/more OP than other elf but isn't to the point of super baby soldier, aside from our 'leech' of course :v, but in somewhat reasonable way). There are also appearance of traditional demon who are actually good at lie and deceive rather than cliche's demon in fantasy.
That some of the detail I managed to put together but there maybe other who do better analyze than me (if they actually read this one, since currently there are no other review) so this is a basic for now, there are some part the author still need to improve but for now still better than average new novel

Reviewed at: Chapter 63: When there is no right answer

This is the story of a man that becomes a little girl in another world.

Pros: I thought the way Earth souls were brought to another world was clever. It has potential for scholars in the new world to explore otherworldly knowledge, culture, and power.

Cons: The main character and the hemomancer sister have foreign thought processes- they think using their power is natural and use a different standard to define "normal". In addition, the main character is paranoid.

Despite the psychological problems, I do like that there are both elements of being overpowered because of the previous life and the power creep of weak to strong since they have to start anew in another world.