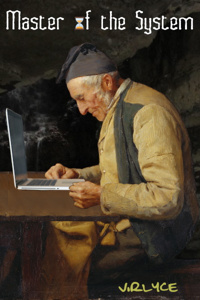 Paul wiped the sweat away from his brow. The newest mission he had been given was quite ridiculous, but even still, he was working hard to complete it.

“Protect at the cost of our lives.”

“Protect at the cost of our lives.”

Paul turned his head. In his opinion, there was something wrong with the hypnotism skill he had been given. The people he hypnotized did their best to complete his orders, but they could only remember one order at a time. Currently, he had given them the order to protect him at the cost of their lives, but it was mainly to force them to follow him. Also, with a combat force, it was easier to make money by hunting spirit beasts than by protecting people. Right now, he was strolling through a forest, carrying hundreds of dead beast corpses on his back. His interspacial pouch was already full, so he could only bring the rest of his kills the old-fashioned way. It wouldn’t be long before he returned to the capital city. There, he could sell his loot and put his hypnotized helpers to work.

After a few more days of traveling, Paul reached the capital city without an issue. The first person he saw made him very concerned. The rest of the people waiting in line concerned him as well. All of them were carrying a single spirit stone, and each of them were mumbling, “Egg fried rice.” They looked as if they had been walking on the road for days, and Paul recognized the blank look in their eyes; after all, all of his employees had the exact same look. Was the cook using the same hypnotism skill to increase his business? How despicable. If the weakling chef had any confidence in his cooking, he wouldn’t have to resort to low means like this. Even if it concerned Paul, he wasn’t going to interfere. As an interdimensional mercenary, he knew how unnecessary trouble was always brought about by sticking his nose in places it didn’t belong. Besides, it’d be hypocritical of him to criticize the chef when he was also doing the exact same thing.

Luckily, the guards by the gate weren’t hypnotized, but that also meant they were very concerned when they saw the literal mountain of beast corpses Paul was carrying, but they were smart enough to not cause any trouble for him. Upon seeing the bodies, who would? One of the guards swore he recognized the legendary shadow killer, a panther-type spiritual beast, amongst the corpses. It had been a terror upon the merchants trying to enter the capital city for several years. The army had tried to get rid of it multiple times, but their attempts always ended in failure. The guard cleared his throat. “It might be a hassle to get to the marketplace. Should I ask the merchants to come to you?”

Paul glanced at the gate; it wasn’t large enough for him to walk through with all the beast corpses on his back. However, to Paul, it wasn’t an issue. “No need,” he said to the guard. Paul bent his legs and jumped. The mountain of corpses rose and fell in a flash.

The guard was stupefied. He had never seen anyone jump over the wall before, much less while they carried thousands of beast corpses. “H-have a great day….” There was nothing else he could say to someone like that. As he watched the mountain of corpses move further and further away towards the market, the guard let out a sigh and shook his head. Some people were destined for great things. Some people were destined to guard the gate until they retired. He knew which person he was.

[Do you seek justice?]

The guard blinked. There was a line of text in his vision. Was he hallucinating? Maybe one of the dead spirit beasts was emitting an odor that caused visions to appear. Anyway, what kind of hallucination was this? He was just a guard. If he sought justice, he’d have chosen to be a magistrate instead.

[You see the hypnotized state of your kind. Does it not burn your heart with anger at the injustice?]

The guard looked around. The recent visitors had been acting strangely…. All of them were here for some egg fried rice. When he looked at their dazed and dirty states, he didn’t feel any anger in his chest. All he felt was a sense of unease and creepiness. What if he turned into one of them? Just the thought of that sent chills down the guard’s spine.

[Max, you have the heart of justice. Let your body be a vessel for my will. Together, we can cleanse the evil growing in this land.]

The guard, Max, scratched his head. Could it be, he was also a person destined for great things? He wouldn’t retire as a door guard? After pondering for a moment, Max shook his head. He was too old now. If he were just ten years younger, perhaps he’d have jumped up at the chance to become a hero; however, now, he understood how the world worked. Cleansing evil, something like that was impossible for a single person to do by himself.

[Max, your choice greatly saddens me. As such, in the name of justice, I shall force you to become my vessel. Open your eyes, Max!]

Max shut his eyes as tightly as he could, but that didn’t stop his vision from becoming blindingly white.

Pravos, the god of justice, narrowed her eyes at her display. Someone had actually bought Razvrash’s hypnotism technique from the marketplace and passed it on to their users. Long ago, Pravos had made a deal with Rynok. She would pay him, and he would tell her if anyone bought evil or corrupt techniques from the marketplace. She had even announced her deal with Rynok to the world, claiming she’d declare war on anyone using evil techniques, yet some punk still dared to go against her by buying Razvrash’s trash?

It was a bit too expensive for her to transfer her strongest users through portals to get to the daring punk’s little hideout, but that didn’t mean she couldn’t create some users to hamper the god’s growth. She had inspected the punk’s user with the hypnotism technique, the one carrying thousands of beasts on his back. It might take a while for her to grow a user strong enough to contend against him, but she was confident she could do it. Her confidence came from the fact she was the god of justice. She knew all the gods stronger than her since she had met them during the creation of the laws. Since she didn’t recognize the punk god’s aura surrounding that user, it could only mean one thing. The god was weaker than her.

Pravos stroked her chin. Even if the god was weaker than her, she was still a little behind him in this area. The only thing she could do was find more lifeforms with hearts of justice and invest her power into them. With that, the playing field would soon be even, and after just a little more time, her forces would overwhelm the other’s. Pravos licked her lips and scanned the display, searching for suitable users. Her heart pounding in her chest, and her eyes became bloodshot. Crushing evil, it was what she lived for. It was once again time for her to show her strength!

Oh no, she is about to REALLY screw the fuck up.

I wonder how far the God of Justice would need to be sent into the future to have her domain completely eroded? Justice is a little more universal than potato chips, but time conquers all.

... yeah she's a bit too arrogant for proper justice. Did she not get a news feed about Time being back?
"I don't know this god's aura signature so they must be weaker than me" is a bully's logic anyway.

She either doesn't follow the news closely... or is not that bright.

I'm thinking both, since they're not exactly mutually exclusive. Well, that and Justice is always a self righteous ass when personified with no need for the view of others on any given subject they disagree with.

Fair point, both would match her domain.

Having enough confidence to judge people on their actions or not care about everyone's opinion enough to judge fairly and evenly.

You either get a psychopath or a jerk.

or a self righteous Psychopathic Jerk.

Hubris seems to be a common issue for the gods, I wonder why

o my friend it is not hubris, but the fact that the gods are always completely right and all powerful.

how could you dtermine their 100% praise worthy actions as hubris🤯

Thanks for the chapter. Oh, this world is going to have an influx of system users, and it's going to be oh so funny!

Laovi, The Eldritch Banana 6 months ago

So if someone buys something in the market does it only say that it was bought or does it say who bought it?

This new sect called "The Stolen Users" and everyone is scared of them because half of them got much power and then had their god beaten up, and the other half have these guys to defend them...

Thanks for the chapter! :)

She will regret this. I don't blame her for not knowing, but I bet Vremya won't care... lol