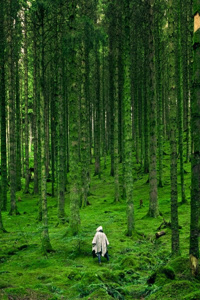 The dream of reincarnating was all hope and freedom for a better life. But, living through one is another matter, more so in a world where electricity doesn't exist yet. To make matters worse for the protagonist, there's nothing to aid his newfound life. No magic, no system, and nothing remotely fantasy-esque.  It doesn't sound really enticing, does it? Well, our protagonist really doesn't have much of a choice. He wasn't brilliant enough to invent things and change the world for the better. But he is born to a noble as the second son, and quite frankly he got lucky. Who knows how miserable it would be if he had been born as a peasant.

He lives long enough to reach adulthood and by chance, he met something unexplainable. Something that will change the whole course of the history of Middilgard. The balance will be broken, new power will rise, and danger looming from a distance. His life will be at stake and perhaps something bigger in the long road. Who knows, you might find out later on what is he up against.

This is a story of medieval life blending with RPG elements. A numbers game that will prove consequential in the far future. Someone once said, "Only those who grind will reap the rewards."

Take a look and comments are much appreciated. Help this one to be better since wouldn't people like better things?

The MC is very unlikable, idiotic, foolishly disrespects everyone (including his family) and there isn't anything interesting about him or what he does despite having some isekai modern world knowledge.  He essentially mooches off his dad as a minor nobles 2nd son and apparently spends most of his time and money whoring his life away.

And then suddenly out game-like monsters start attacking and he starts gaining levels and such.  And he begins to act like a completely different person out of nowhere.  More like a stereotypical hero and rushes off to save his "family" and stuff.

Except he has already made it pretty clear by his earlier actions, of which EVERYONE is very much aware and is alluded to frequently, that he largely disdains his family (and pretty much everyone else) and doesn't really show them any respect or love.  He also is known for being a layabout with near zero interest in combat and such (he has to be forced to do anything) so him rushing off to fight doesn't add up.  It doesn't really fit at all to say the least.

Initial premise is fine but the plot is very simplistic and story-wise after the 1st couple of chapters the story is mostly the MC rushing around fighting (badly) without him telling anyone anything or using his brain much at all really.

The leveling is a bit different from your typical blue boxes which is nice.  More like a pencil and paper RPG style.

Worldbuilding is good at first and then becomes quite sparse past the beginning chapters.  The characters do at least talk as if they're from the Middle-ish ages which helps quite a bit.

Grammar and spelling falls off some as things progress but never gets bad IMO.  I tend to give stories here a lot of leeway here (since they're a)free and b) often by amateur authors who have full time jobs/school IRL) compared to most so YMMV.

Reviewed at: Chapter 4 - Enough Lying Around

Sofar the author has a good mix of world / character  building without making the story boring and overly long winded. Also the prosective of the story for reincartation is a newish one for me so im rather liking it so far hope it holds and can be written at a decent pace will do a better review once the story progresses more

Reviewed at: Chapter 1 - The Second Son of Mossdale

The grammar is so bad that the story is unreadable. There is frequent tense mixup and punctuation errors. I suggest that the author use Microsoft Word or Grammarly (There is a free version) to fix his story. Even the comments the author makes is marred by bad grammar.

The story seems to be about a spoilt lazy wimp in the medieval era winning big. It's difficult to believe that it's actually the medieval Era considering that others are tolerating his character. Maybe it's inspired from Chinese novels?