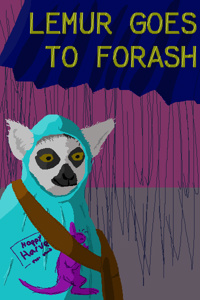 Mme. Flore looked up from a paperback book she'd been reading as the pair approached her. She stood, tucked the book into her purse, and adjusted the folds of her long, black dress.

"Very good. Commendable. You're earlier than I expected," she said. "I think that deserves a bonus." She pulled a notebook out of her purse and made a note. "Do you have an AR device? If not, I'll have to transfer the money later, when I'm at a terminal."

Essabrou unslung their backpack and began rooting around in it.

"There's no need to stand there in the rain," said Mme. Flore to Rakkel. "Come up here where it's dry."

Rakkel stepped hesitantly onto the first step of the gazebo.

"I won't bite, ha ha ha," she added, smiling all of her shark fangs at Rakkel as she said it.

"How did you know where to find me?" asked Rakkel.

"Oh, I have my ways," said Mme. Flore, waving her webbed fingers about in what was probably meant to be a mysterious gesture, but looked instead like she'd gotten something stuck on them and was trying to shake it off.

"Here it is," said Essabrou, producing the brick of cardboard. They held it carefully in both hands and quickly moved under the edge of the gazebo, obviously not wanting to risk it getting too wet.

"Oh," said Mme. Flore. "Is that all you've got?" She grimaced at the barebones device.

"No way! This thing works just fine. I want my payment now."

"Listen," said Essabrou, "we're both creatures of business, you and I. We know how the world works. I'm sure you wouldn't walk away without payment for a job you've done either."

"No," said Mme. Flore, "I'm a woman of business, and that means I'm a woman of her word. If I say I'll pay you later, I'll pay you later. Or else I lose something more precious and infinitely harder to acquire than money: My reputation. I don't know," she added, "what you are. But you've a long way to go before you even begin to understand business." Her sneer was subtle, but it was a definite sneer.

"I've already paid you the first part of your fee, haven't I?"

"So you have no reason to doubt me."

"But I do have an AR device right here. It's not as though you couldn't pay me now."

"Those cheap cardboard units barely count," she said. "For all I know, it's loaded up with viruses or something."

"Viruses? No! I've been using it for weeks now, no problem."

"You can borrow mine, if you want," said Rakkel.

They both looked at xir.

"That works, doesn't it? You should be able to sign out of my account and into yours. Right?" Xe would have to take the time to sit down with it and learn how it actually worked sooner or later. But xe was pretty sure that was possible.

"I don't see why everybody keeps giving me crap about the one I've got," said Essabrou, "but okay, I'm fine with that. Thanks."

Rakkel handed the chunky black plastic visor over to Essabrou while Mme. Flore watched, her expression unreadable. Rakkel wondered, glancing over at her, whether she had to go out of her way even to make readable facial expressions appear on that beady-eyed torpedo of a face.

"So, what do you want me for?" xe asked her while Essabrou fumbled with xir AR visor.

"I'll tell you when this one leaves," she said.

"Might as well tell me now," xe said. "It'll save us both some time, since I don't think I'm going to be interested anyway."

"You're wrong about that," she said. "You'll be interested in this."

"I've got half a mind to walk away right now," xe said.

"That would be a mistake."

"A mistake? Why would it be a mistake? Is that supposed to be some kind of threat?"

"It would be a mistake," said Mme. Flore, "because you'd be missing out on an opportunity that I think you'll like."

"You've already been spying on me," said Rakkel. "You had me followed or something. Or else you wouldn't have known where to send Essabrou to find me. As far as I'm concerned, that's already threatening."

"I've been doing no such thing."

"Then how did you find me?"

"Got it," said Essabrou. "I think." They looked up at Mme. Flore through the visor's long, narrow lens, holding it to their face with both hands against the bits that should've hooked over their ears.

Mme. Flore pulled a small, sleek, single-lensed device out of her purse, held it to her left eye, and transferred the money. From the outside, this was invisible. Rakkel wondered if xe'd be able to see anything pass between the two devices if xe had a third device to look through.

"Oh," said Essabrou, their face falling. "I thought you said you'd give me a bonus."

"But I brought Rakkel here so quickly, I thought-"

"And then you proceeded to waste my time. I'm deducting the time wasted from the bonus, since I still haven't been able to talk to him-"

"I use 'xe/xir' pronouns. Because," xe explained, "I'm neither male, nor female."

"That doesn't make any sense," said Mme. Flore. "How can you be neither male nor female?"

Rakkel had no idea how to answer this question. It seemed straightforward to xir.

"Never mind," she said, "it's beside the point. The point is, thank you for your service, Essabrou. Now, please leave."

Essabrou quickly handed Rakkel's visor over to xir and backed away from the gazebo, then hesitated. "Er," they said, "I also thought, if you have anything else you might need me to do-"

They ran away through the rain.

"Essabrou was very polite, fetching me," said Rakkel. "And prompt. We came directly here. Whatever it is you want me to do, you might be better off asking them to do it. They think very highly of you." Unlike me, xe almost added.

"No," said Mme. Flore, "I want you for this. You have the right kind of spirit for it."

"Oh, not a full partnership," she said, laughing. "Not in my business. But I have some goods I'd like to unload at the marketplace, and I don't have time to oversee it personally. I thought you might like to do it for me."

"For a cut of the profits."

"Seeing as how I bought out your whole stock yesterday. Or do you have more rings?"

"But I don't know how it works," said Rakkel. "I didn't even know what price to set, or how to accept payment. I thought you'd pay me in physical coins."

"And you made the sale anyway."

"Because you took pity on me."

"Because you impressed me with your fast thinking and bold spirit. And because I liked your product." She touched the base of her neck, right above her dorsal fin. Rakkel's gaze followed her hand and saw that she'd pierced the fin and put one of the rings in it - the one with the red and orange band inside the silver.

"Exactly. I provide the wares. You provide the labor. This lets you build a reputation in the market. A presence. I'll even help you register with the market authorities."

She smirked. "Yes. You're supposed to register. I suspected when I saw you yesterday that you'd missed that step. It isn't a terribly strict rule, but they do like to keep a database. And once you're in the directory, you'll get all sorts of benefits. Such as, people will actually be able to find you."

"See? You need my help. And right now, I need yours. So we help each other. We both win. That's business."

Rakkel hadn't thought that anything the shark lady could possibly say would interest xir. But xe hadn't considered this.

"What happens after?" xe asked.

"You give me my share of the profits," she said, "and then we part ways. No obligations. But if you're worried about it, I do intend to keep you on retainer. Depending on how well you do."

"I'm sure you'll do fine. But if it's a complete disaster, I'd want to cut my losses, wouldn't I?"

"So this is also another test."

"But what are the goods?" xe said.

Welton stood at the base of a huge tower.

The tower stood at the end of a pier. It rose five stories and, at its top, projected a brilliant T of light across the water and across the city on its opposite side. The two beams of light rotated slowly around the tower's crown. The heavy rain stippled them with streaks, hints of prism colors flickering along the edges of the drops.

Forash Lighthouse stood in the crook of the Aeltspring, opposite the market's western extremity. It dominated the city's admittedly simple skyline. Welton had wanted an excuse to visit ever since he'd arrived, and at last, here he was.

He goggled up at it through the shroud of rain that fell from the edges of his umbrella.

Of course, the beams were there just as much for effect as they were to warn river boats away from the shore. Both banks of both rivers had smaller, less ostentatious lights running along them at regular intervals, which worked just fine on their own and could throw out enough lumens to cut through the thickest fogs.

But river traffic got complicated sometimes, especially here in the great, churning lake where the waters met and then separated again. It needed to be coordinated. This was the lighthouse's first real purpose: To provide a station for traffic coordinators to look out across the lake from a bird's-eye view.

Its second real purpose was to be a landmark. Every city needed one or two of those, right? Somewhere for tourists to go and see, or for people to agree to meet for a date, or to make pictures of the city immediately recognizable. It was a brand. And as a brand, as a tourist attraction, it would naturally try to make itself flashy.

Adjusting a slider on the side of his AR spectacles, Welton brought the beam into focus. A cascade of holo-cubes swirled around the lighthouse beam in a regular helix, growing and shrinking and cycling through a spectrum of fully-saturated colors.

Perfect, he thought. It's amateurish, lazy, and uninteresting. I could do better. I could do a lot better.

Somewhere in his duffel, he had a tiny portable holo-projector with his demo reel on it. He already had ideas for adopting some of the designs he'd made to look good when projected around the beams.

He walked up to the lighthouse door and rapped on it with his thick, black fingernails.