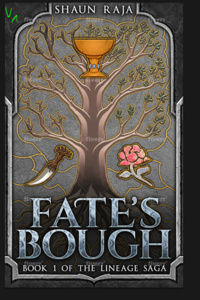 Lineage: Rise of an Empire

We came upon the two enemies with a vengeance, Cauaria was first to bridge the gap, her xiphos thrusting forward in an underhanded motion, the tip of the blade aiming to pierce the enemy’s throat.

The opponent however acted fast, contorting his form more than one might believe possible, allowing his own dagger to deflect the strike towards his left shoulder. Hissing in pain the man stepped back, pulling up his defenses, left arm hanging limply at his side.

Desiring to capitalize on the advantage Cauaria pressed the attack, leading with her left foot and switching to an overhead sweeping motion. The blade came down from her right, at an angle and directed toward the enemy’s neck, specifically targeting the disabled side.

Even with my attention focused on the surroundings, I barely noticed the shift in the shadows. The second opponent appeared, the dagger thrusting towards Cauaria, her attention still focused on the enemy in front.

“Cauaria to you left!” I yelled out, but it would not do much good. There was little I could do; she had pushed too far.

Seconds later there was a ringing sound, the echo of metal striking metal. My warning had been unnecessary, the woman had clearly been in such a situation before.

In the moment that I had yelled out my warning, she had reached toward her belt with her left hand. Removing the iron shortsword from the scabbard on her right side. In one fluid motion unsheathing the spatha before raising it to intersect the oncoming attack, catching the blade between her sword and cross guard.

The second enemy had no time to remove his blade before she flicked her sword, tossing the weapon from the man’s hand. Following up in the same breath, she responded with her right hand, stabbing her main weapon deep into the flank of the attacker.

In the span of a handful of seconds, she had shown her skill. Her fluid movements, wide area perception, as well as the ability to move from attack to defense without pause, showcased her abilities to combat groups of enemies. The woman was an agile and nimble fighter, years of experience and natural talent depicted in every movement.

Injured and reeling from the flurry of attacks, both opponents created some distance. Choosing to obscure themselves within the dissipating clouds of darkness.

Cauaria however did not make use of this opening, she remained rooted in place, her arms, and legs tense.

I rushed towards her, worried if she had taken damage from a hidden strike. There were however no wounds on her, but the reason for her rigid position became obvious almost immediately. Her nose was bleeding, and her eyes were bloodshot, whatever paralyzing agent was in the air she had inhaled too much during the earlier exchange.

Taking her safety into account, I ordered two of the remaining three sailors to remain close by and protect her while her body tried to deal with the poison. To help her along, I injected the smallest amount of prana into her bloodstream, just enough to help counteract the poison. With that little bit of aid, she would be able to at least swing her arms until either the prana eliminated the mana poison, or her body expelled it.

Either method would take a few minutes. Time, we did not have to wait around for, already I could see my disruption attempts waning. The darkness mana from the globe, pulsating like a beating heart, dispatching bursts of dark mana through the network of ethereal roots. Burning away my intruders, with every pulse more and more of the shadowy tendrils regenerated.

“You two need to defend her, wrap your bandanas around your mouth and nose, it should help reduce the amount of poison absorbed. One of you will come with me, Cauaria managed to wound both, we need to end this fight now.”

The sailors seemed to understand the predicament we were in. Following my instructions, two stayed behind while myself and the other steeled our resolve and pressed forward. Together we charged forward into the darkness, braving the poisonous haze to strike at the retreating and injured enemies.

Already I could feel the rising nausea, the sailor by my side was in a similar if not worse condition. Even as our conditions worsened, we pushed through, coming upon the one opponent whose flank was still leaking fluid.

Wasting no time, I struck out with my axe, bringing it down in an overhead swing. Surprisingly, the enemy had not been expecting the swift counterattack, caught completely unaware the shadowy figure had little choice but to raise his right arm in defense.

His ear-piercing screech reverberated throughout the hold, everything above his right elbow gone. The severed limb disappearing into the darkness just like everything else.

Screaming in pain, while holding his right stump the man failed to notice the sailor appear at his back. That is until the point of his blade thrust through the opponent’s rib cage. I watched as he struggled against the blade, grasping the edge in a futile attempt to remove the invasive object.

It was removed soon after, but only after the sailor had forced him to the ground. His foot firmly upon the enemies back, then proceeding to force the blade out the side of the man’s body, rather than the initial entrance point.

“That was quite a bit of pent-up anger, did he kill your mother?”

“No, they killed my brother.”

I had merely spoke in jest, attempting to lighten the mood. An action I instantly came to regret with his response. One of the earlier two sailors were probably related to this man, justifying his vicious actions.

“Come on we got one more to kill. Let us get this over with and figure out what is going on.”

Support "Lineage: Rise of an Empire"

Bio: I have been a lurker here on RR for a long while now. Always had the idea for the same novel running in my head for years, now finally putting pen to paper.

A master's student in the States, so sometimes school and work will interfere with writing time. However, I hope to see this epic series through to the end, and I hope everyone here can support me along the way.