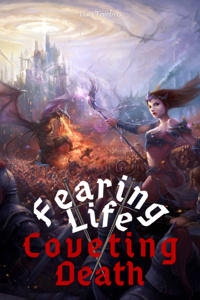 Why do we live? Are you listening to me? Can you explain it to me? Whatever you answer or not, I will keep going forward... for this is my own answer.

Reality is ever changing.

Overall this story is a beginner writer's take on a cultivation novel.

Style This story reads more like an anime than the typical novels I'm used to reading. At times, this works, though with the sub themes of the adventure books Alonn reads as a child I expected something a little more consistent.

Grammar There are a lot of errors throughout this story. The first few chapters are the most polished, and in later chapters there are more mistakes. This is an easy area to improve, and I hope the author will take some time to do some edits to improve grammar, spelling, and punctuation.

Story This is hard for me to assess, because I'm not sure where the writer is trying to take the story. It almost feels like this is two story ideas combined together. First, we're following young Alonn through his coming of age as he strikes out on his own. Then, he decides for his first mission he will take on an impossible challenge which ends in catastrophe as the unskilled youngster traps himself in a cave. Then we have a story in the cave over the span of several months, where Alonn doesn't seem like the same character. Very recently, he returned to the surface, resuming the original story. I'm not sure what the purpose of the months in the cave was, or why so many chapters were devoted to it, but maybe it will be relevant in time?

Character As far as characters go, lots of people are introduced like they will be important at some point. So far, Alonn is the only important person. He's definitely a 'lone wolf.' I hope he will make some real friendships during the story, since character relationships are really important to me as a reader. At times, I struggled to understand Alonn's motivations. The side characters feel shallow and slapstick at best once he leaves his hometown. Before that, in very early chapters, side characters were a little better developed.

I am direct messaging the writer with some more specific feedback, and offering to update my review if they make significant edits to their story to justify a change in rating!