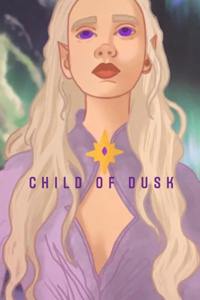 Child of Dusk, or, I was Reincarnated as an Elven Princess!

Life can be cruel, especially to those who don't fit in. But what would you do if you were given a second chance?

Tim was a nobody during his time on Earth. As a penniless orphan with no friends to speak of, life was tough for him in his little Arizona town in the '90s. He'd utterly lost hope for the future until one day, he was reincarnated as Alvanue, beloved daughter and heir to the Starlit Throne of Silthonduen. Now, Alvanue has everything a princess could ever want: a loving family, loyal comrades and an entire kingdom at her finger tips. But what good is a kingdom when there's a whole world of magic and mystery out there to explore?

Ok! Disclaimer time. This is my first real web novel as well as a rough draft, so please feel free to point out any errors or plot holes (politely, of course).
Each chapter will be around 4,000 to 6,000 words long and while I was posting every day at the beginning, I think I'll cut that down to once a week for now, excluding bonus chapters! I really don't want to get burned out. I started writing this because I love world building, so this is gonna be heavy on lore. If you're not into that, there's still a ton of character progression and action to look forward to! It's going to be slow at the beginning, but I promise it will pick up eventually. Thanks for checking my story out, I appreciate it a lot!

Also! The cover is art done by David Zavala. Please go check out their page, their art is fantastic

Good, but consider the gender bender.

I have enjoyed the story so far and think it has potential. The main thing I will say is a piece of advice to the author. And that is to remove the gender bender element. I say this because of as off the current chapter, it really just hasn't been relevant. I am fairly certain the author, like I feel many authors do, added the gender bender aspect to make the fact their female charecter was tomboyish make sense. I feel authors tend to do this because it is difficult to write a good female lead as a male author. But the fact is that the gender bender tag will turn off some readers. I know in the past there was a time when I automatically didn't read anything with the gender bender tag. I feel like there are other readers like this out there so that's why I suggest removing it from the story unless you plan on expanding on it more. Not that I dislike the part. But I feel you might get more readers. So that's my advise.

that being said. To anyone reading this considering the novel. It is a pretty solid novel so far and the world is interesting with lots of potential. The only negative being the sometimes overly wordy sections. And that I soemtimes find myself disliking the mc and the guard. But mainly the guard. Overal I would consider giving it a try.

This story really stuck out to me. The style, the tone, it all fits together pretty well. I'm big on lore and world building and the little snippets we've gotten to see so far are pretty intriguing (the headings for each chapter kinda remind me of Practical Guide to Evil).
I do have a few problems with the story, though. While I've liked everything I've read so far, at times it feels like the author is adding in some unnecessary filler and the pacing can drag a bit. (We don’t need everything to get described, we want action!). I think this is made up for with interesting characters and really good dialogue, but it was noticeable to me.
Another thing, I'm kind of confused on how the magic system works, but hopefully that gets explained later on. The way things are going, it seems a bit xian xia? The author keeps mentioning mana reserves which kinda sounds like cultivating...Not sure how that'll be introduced, but seems pretty cool.
Overall, excited to see where it goes. It just needs a bit of work. I've been looking for a good, new fantasy story to binge so I hope the author keeps writing.

An enjoyable read, well edited and with solid characters and storytelling. The plot is slow paced but you can see hints of the more active direction it'll take later. I feel it's setting up for some big adventures. However, early on it reads more as a slice of life, particularly since it's heading into a school-of-magic setting. There's nothing wrong with that, but the action in the first chapter could be a little misleading for readers. Expect a slower pace for many chapters.

I think I'm most impressed with how distinct some of the cultures in the story feel. There's a sense of depth and history, and the exposition is gradual and feels natural with no info-dumps. The worldbuilding is drawing me in, and I like piecing together the hints we're given.

I do feel just 'Child of Dusk' would be a better title for this story: the reincarnation angle is played lightly and mostly just provides the MC with perspective and drive. I like that reincarnation does not provide the MC any powers. Certainly, the reincarnation aspect is overemphasised in the title. This is more a coming-of-age story than a reincarnation or Isekai.

Overall, a well developed narrative, with a lot of promise. I'm enjoying this series so far, and I hope it continues!

The initial chapters are plain info dumps about the world and that too is revealed in the most mundane way. There are events and then texts connecting it all together. The conversations are quick and gets finished soon. The rest of the chapter would be just filler. The novel is slow, the pacing is atrocious and only because there is so much filler.

Author tries to show us elven culture but fails miserably. The important parts to the story are skimmed over while more importance is given to details which doesn't matter. It's like a dish with only seasonings and no meat.