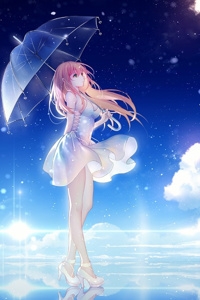 What is a woman to do after reincarnating? Her cultivation crippled, the realm she inhabited foreign, and even her old name lost to her. There was one familiar comfort left to Daphne in these trying times: shopping.

There were some fates worse than dying Daphne supposed. She could have been poor.

This is a comedic take on the adventures of a xianxia cold beauty.

Link to my discord server

Daphne is a woman who has evidentally spent her years in her native universe learning all the wrong lessons, and more importantly, learning all of those wrong.

She carries them still in her new life as the daughter of a fantasy noble, and watching her contextualise her current circumstances with learnings that may have been correct even in her previous life is equal parts amusing and morbidly fascinating.

We're five chapters in and the woman has been shown to be hopelessly prejudiced and completely incapable of adjusting her mindset.

If you've ever read the Seventh Horcrux, Daphne shares a lot of the same energy as Volde-Harry.

Amazing! Halt sure knows how to make a story immediately interesting. Step aside arrogant young masters, it's time for a jade beauty to have her time in the spotlight. The writing and style are impeccable, and the MC is refreshing. I can't wait to see where Daphne (the MC) goes from here-- I want her to have all the clothes and shoes she could ever desire (and the sect brothers better give them to her).

So take a stereotypical xianxia Jade Beauty Young Miss, toss into an Otome reincarnation story without context, and enjoy the comedy.

You do need at least tangential familiarity with the types of stories mentioned above for maximum appreciation, but it is hilarious if you do.

Not enough chapters to say if the comedy has staying power or if it'll shift to be more serious later on, but as it is things are looking promising.

It's a bonkers concept executed well. The "comedy of errors" aspect and the main character's obliviousness is funny and strangely endearing. There are some strong foundations here for more serious plotlines or events, although the stakes are mitigated and the tone kept lighthearted (even when there are serious things happening around her) by the fact that the main character is badass enough to handle most threats to her person. As a reader I find myself rooting for her to just totally break the setting and leave everyone utterly confused in her wake.

My eyes have opened and i see Mount Tai

Reviewed at: 10: The Dao of Disappearance

The Dao of parody is exceptionally well trodden by this author, truly they must face great tribulation for their AUDACITY.

In all seriousness, hilarious parody of the xianxia genre, with a main character bordering between wise and insane.

It might also be a parody of otome game "reincarnated as the villainess" novels, with it's setting of a classical magical western fantasy world, a prince to court, and a magical academy for drama. Though the MC is wholly unaware of any of this, being from a cultivation world and knowing nothing of the world she's in

Daphne's absurd take on the world

Reviewed at: 04: Blood of My Blood

A Fun Romp
Expertly delivers upon the premise: a very cracky take on a genre mashup.

My advice to new readers is: don't skim the prose! The descriptions are where all the best jokes lie. Daphne's absurd take on the world is delightful.

The Future
To really push this story towards the heavens, I think we need to see Daphne a little more grounded by the supporting characters (So I'm excited that we're due for the academy arc already).

There's a subtle art to crack stories. Strong, consistent characterisation is really what turns a good crack story great: every character should be real enough people that they are taking their world seriously, especially when what's actually happening is insane.

Not just for McDonald's realm cultivators

Reviewed at: 10: The Dao of Disappearance

With more words and more chapters, I've come to view this as more than simply a copypasta that grew too big in the telling, but rather as an actual story. A story that doesn't necessarily necesitate having delved into the depths of both genres to enjoy, though having done so greatly enhances the experiance. It's a parody with heart.

The style is compentent and workmenlike with a few flourishes that elevate it. Less is more as they say.

The story plays its concept fairly straight. A cultivator thrown into another setting without Qi is likely to look like some alien creature. I'm curious just how far this premise can be taken without becoming complete unbelievable.

There is only one character, her name is Daphne and she is a treat for your typical jade beauty.

The grammar is tight and there are very few mistakes. None of which I noticed during my first read through.

I've gone from ironically giving it five stars to unironically doing so when suggesting it to others who are fans of both genres. This isn't just a story for Mac Donalds cultivators. I'm sad that I gave it that moniker on my first go around.

Reviewed at: 09: Yet Profound

The first, sometimes the only, question that needs to be asked with a story like this is whether or not it's funny.

I could talk about the hows and whys of why Halt's humor lands: The way Daphne is disassociated from the setting. The times that the incredible and incredibly frustrating punchlines hits where you expect it and the times where you got completely baited. The way the prose manages to simultaneously set the jokes up and also be excellent.

But doing all of that stuff properly doesn't make a story funny. And Halt's story happens to do all of these things.

That's the issue with humor - you just have it or you don't. Your jokes land or they don't. You can read a hundred books about how to write humor, tell jokes, et cetera - and people do! But that sort of thing rarely works for improving the most important thing in a comedy.

Sometimes, you just have to have it. And this story has it.

There are many parodies of xianxia themes floating around the internet. Most of them take the form of memes or one line quotes of particularly egregious examples of the genre. That leads to the biggest problem of this story. It's more funny than the content that's like it. I'm finding it more difficult to be entertained by that kind of content because of this story. To me, that's the highest bar there is.

edit: 1/2star deducted because how dare you

Stairway to the Heavens, a meme at a time

One of the most frequent joys in fiction is seeing contrasting themes, settings, and ideas be crossed in interesting ways. Sometimes it's done in a way that leaves you wondering how it hasn't happened before. That's how I felt with Virtuous Sons, and that's the feeling I get with These Heels Step Heavenward. A traditional Jade Beauty straight out of Xianxia land, injected straight into the veins of an Otome setting. Just seeing that sentence alone should set your mind to racing if you're familiar with either genre, and how much fun it would obviously be.

And that's what this is. Fun. The style is minimal yet it hits hard when it wants to. The grammar is flawless. The story, such as it is at this early stage, is clear about what it wants to be and will be. A romp through Otome fantasy land by a character whose own setting mandates the kind of misconceptions that'll leave you smiling. Daphne is the only character of note in the first two chapters, but she looms large over the setting - helped, in no small part, by her exceptionally high heels.

I can scarcely think of a better way to while away a little time online. Try it, you'll like it.

Arrogance at it's Best

Reviewed at: 18: The Mark of a Cultivator

This is a brilliant case of a xianxia pure yin jade beauty in an otome world. Great plot, and the story has world-building tidbits in the background. Daphne is a well written main character and I'm looking forward to seeing how her character develops. The rest of the cast is also good so far.