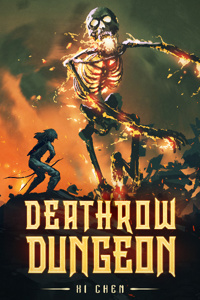 Convicted of a crime he didn't commit and sentenced to death, Max is given one last chance at freedom: compete in the Deathrow Dungeon and be victorious. Against his wishes, he must now endure a series of harrowing trials—trials that will test his strength and wit, destroy his soul, and transform him into a true killer...unless he finds a way to resist.

- anti-hero MC's, but their choices are rational
- a non-standard System...give it a chance, you'll like it, I promise!
- lots of gore and violence

This is my first time writing a LitRPG, so if you have feedback/suggestions on game mechanics, feel free to leave a comment. Enjoy and rate the story to help get it to trending. Thanks!

So far, so good. Interesting system. Looking forward to seeing where it goes. The naming for the standard classes is definitely a point of interest. Can not wait to see the evolutions. Sorry, you had low ratings before. Gonna give you a  star boost because I think this has the potential to be a good story that I keep following. Please do not drop this story.

Another system novel joins the fray!

Deathrow dungeon is a LitRPG which follows the adventures of Max Kong, a dude unjustly sentenced to death row when mysterious forces give him a chance to fight for his life in a battle royale. In an attempt to win back the heart of his (ex) girlfriend, he'll have to fight against system spawned monsters, bosses, and the other (sometimes borderline psychopathic) competitors in the dungeon. Accompanied by a cop with a heart of gold (hellbent on killing the murderer of his family), and some ex-nurse who decided to euthanize all the old people he was taking care of, Max might just succeed.

Style: Narration flows smoothly. The system is limited (and I hope it stays that way) to a 7 star system, where each stat ranges from 1 star (trash) to 7 (maximum human potential). The way stats progress

allows for progression in a way that doesn't drown out the plot. There seems little chance of some crazy, power hungry, gary stu coming along and powergaming the system.

Characters: Effectively fleshed out in a reasonably short period of time. Both villians and protagonists get a chance to shine, which is especially important since the novel so far seems to foreshadow player vs player combat as the most important component.

TLDR: Worth the read. A novel with an interesting premise and refreshing mechanics. Good characters too.