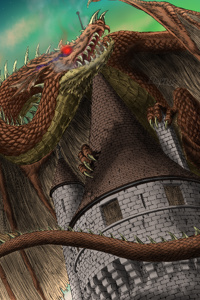 “I'm certainly dying, no doubt about that.” Chris thought as his vision became red thanks to the blood gushing out from the 10cm long crack in his head. His vision was not only red but also blurry and he could hear a distinct ringing sound in his ears.

Chris was laying on the sidewalk staring up at the beautiful night sky bleeding because of a drunk driver hitting him at 90 km/h. Most people would panic the moment they realised they were gonna die but Chris didn’t really care as his family consisting of his wife and two children had died in a shooting at an airport 5 years earlier. Plus he never knew his parents because they died in a plane crash during their honeymoon when he was 4 months old.

Chris lived in many different orphanages when he was a child but he never felt as he could trust anyone, he didn’t even talk to anybody but that was mainly because he didn’t learn how to speak. Chris lived 6 years in different orphanages without speaking until one fateful day Marie came. Marie was a 36 year old woman looking to adopt a son so her daughter Charlotte could have someone to play with and love like a little brother, that day Chris was adopted.

Under the next 4 years he learnt how to speak, write and most importantly trust other people. He also started to understand what a family is and what love is.

The same year he turned 16 his whole world got turned upside down and burnt as his beloved mom Marie died because of a lump of cancerous cells in her lungs. He cried his eyes out for the next 2 days until he realised that he had cried like a baby whilst Charlotte just took it as a champ and became the new mother of the house.

Chris and Charlotte went on with their lives trying to survive and earn money. To everyone's surprise they actually became quite successful in life as they got high paying jobs. Under the slow painful years where they had to fight for everything they slowly started to fall in love with eachother without noticing it.

One day the two of them realised what they felt for each other and in a whim they had unprotected sex thanks to the lack of knowledge surrounding sex they possesed. To nobody's surprise Charlotte got pregnant for the first time at the age of 27.

Their lives went on, they got married, Charlotte gave birth to a beautiful baby boy and later to a cute girl. Their lives were perfect and they were happy, nothing could bring them down... except Charlotte and the babies being killed in a shooting just 4 months after Chris's daughter was born.

As Chris could feel his limbs going numb and his eyelids closing he thought “Finally, I can meet Charlotte once again.”. The next thing he noticed were total darkness and a faint sound of something banging or rather beating.

Chris tried to stand up as it felt like he was laying down in a soft and warm water bed but to his surprise he couldn’t move his legs far before hitting a soft stretchy wall. He felt like he was experiencing deja vu. He started going through all the memories he remembered and then he found the memory he wanted. The memory he recalled was when he and Charlotte talked to a doctor about their first child and the doctor mentioned something about the baby feeling like it was laying down in the womb.

That’s when it hit Chris, he may be in someone's womb. Chris first thought it was a coincidence but as time went on he noticed that the beating got louder, when he got hungry he magically became full without even opening his mouth and the space he was in got smaller or rather he grew. The moment he understood that he grew he accepted that he has been reborn and is currently in his new mothers womb without much panic or confusion.

More time passed and Chris could feel the walls of the womb pulsating against his thin skin and it hurt immensely. Chris started moving and he soon started to see light. “That’s my destination.” Chris though as he moved around profusely to reach his goal. Chris didn’t know how long it took to squeeze out but he felt as if it was over two weeks of continuous pain and squezzing.

When Chris was out of his mother’s womb he felt the air slightly blowing on his skin probably thanks to an AC it felt really refreshing but for some reason he felt an urge to cry and so he did for a pretty long time. Chris only stopped when he felt soft trembling hands hold him and swing him lightly side to side and by instinct he knew this was his mother for sure. While he had been in the womb he thought long and profusely about how to deal with the new parents situation thinking it will be difficult, but at this moment when the feeling of love and security filled him he knew this was now his mother feeling no doubt about that and he will protect her with his life if necessary.

While Chris laid in his mothers soft and loving hands he heard someone say “How do you feel dear? Is the baby alright” in a deep rugged voice. Chris felt relieved for some reason as he understood the voice came from his new father, maybe he felt relieved because he finally had a father but it didn’t matter as long as Chris could protect his mom nobody else mattered.

Chris didn’t hear anything else because he fell asleep pretty much right after his new father finished his sentence. Chris woke up an unknown amount of time later to the sound of a fire crackling and the feeling of warmth from the fire. He could also hear faint whispers but could not make out what they said, Chris tried to touch the person that whispered but to no avail until he could feel a soft hand many times bigger than his lightly grabbed his hand.

As the hand grabbed his hand he felt a feeling of joy spreading in his body like lightning. “Mother.” Chris thought as he joyfully laughed. When he laughed he heard a cute little laugh which was his own laugh followed by a loud laugh and then his new father’s voice “Our son is truly the embodiment of cuteness, he will be a lady killer when grows up!”. His new father's voice seemed truly happy but moments later Chris heard a loud thud and then “OWWW” shouted his dad, “Why did you stomp on my foot so fucking hard woman?” followed by “Because you said something truly stupid darling infront of Caleb.” said mother with a semi irritated voice. The only thing Chris thought about for 5 minutes was “The look my mother gave my new father could probably kill.” and “So my new name is Caleb.”.

After Chris’s new father’s slight mistake he felt really hungry and could not help start crying loud. The sudden loud cry certainly caught his mother’s attention because she came running right after he started crying. She picked Chris up from the soft surface he could only imagine being a cradle and started to comfort him with her soft voice but to no avail. Soon after, Chris heard “Ohhh, you must be hungry.” followed by a short pause then “here you go, open wide.”. Chris followed his mother’s advice and opened his mouth and then he felt something fluffy against his face and a little bump at the outermost part of the fluffy thing and then Chris’s instinct screamed “suck!!!” and so he did until he was satisfied. Chris felt shame when he understood he just sucked his mother’s breast, truly embarrassing he thought.

Time went by fairly quickly for Chris as his days were spent sleeping, moving around randomly, drinking his mother’s milk and sleeping. About 7 weeks after Chris was born something amazing happened, Chris could see, not well but if he stared at the same spot for a couple of seconds the thing he stared at started to come into focus. Chris felt as if he had achieved a major achievement especially when he saw his mother’s slight out of focus figure. “Wow, she is truly beautiful. Like an angel, and she’s my mother!” thought Chris happily. After that thought his thoughts started spiraling “WAIT! Does that mean I will become handsome in the future?” but his hopes soon got crushed by the out of focus figure standing in the doorway who was Chris’s new Father. His new father had broad shoulders, thick arms, legs and a thick neck. “Well with that figure he can certainly not be good looking.” thought Chris feeling a bit sad.

Writers note:  I know this chapter may be a bit slow paced but the story will start to pick up pace next chapter. This chapter was mostly meant to make you familiar with Chris as a person and what he has gone through to become the man he will be in the coming chapters. I hope you will continue to read this story and if you have time please leave a comment about things you like and don't because i'm totally new to writing so any criticism is appreciated no matter bad or good.

Thanks for reading Chapter 1