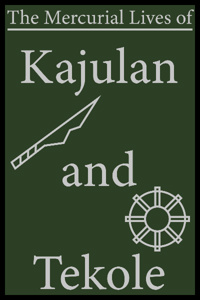 Kajulan is a young outlaw in the city of Romba, whose way of life has become threatened by the ever-shifting realities of the criminal underworld. Armed with nothing but a knife, some wit, and a poor attitude, she must learn to adapt to the new reality of her situation, lest she gets left behind by a changing world.

Thankfully, Kajulan isn’t the only one in Romba at a crossroads. Factory hand Tekole has begun to become disillusioned with his lot in life, and with just a little pushing, Kajulan might find that she has a new partner in crime.

Inb4 this blows up

Reviewed at: Chapter 2: “Not going to lie, I’ve been living a pretty exciting life.”

When is a review too early? 'After two chapters' is a solid answer. So I went onto the author's website to read the next two to four chapters, depending on whether or not Mr. Orange decides to split them up like he did with the two currently on Royalroad. And after six (!) whole chapters of reading, I can (somewhat) safely say that this is a nice and special story. And no, that's not a nice way of saying mentally handicapped, it really does stand out from the crowd, and definitely deserves one of Trending's top spots

Why, you ask? Because this is a story about youth. And being a gang member, but that's less important.

The story centers on the patologically irresponsible Kajulan and the somewhat insecure Tekole, as they gag and joke their way across knife shops, gambling dens, and armed robberies with the carefree joy of teenagers messing around. It's funny and neat and though I've only read the aforementioned four to six chapters, I think I'll be happy with wherever it goes.

And on the topic of carefree teenagers and being happy with things, we do a seemless slide into talking about the character, because I don't like it when reviews feel like 7th grade book reports.

Well, it's more of an awkward tumble now that I've written that little paragraph....

Anyways, character. We've got lots! The two main characters really just feel like genial teenage dipshits, constantly doing dumb stuff with this affable air of "eh, it'll be fine". Mr. Orange has also created a gang leader that manages to have a distinct culture without being an obvious ripoff of the Godfather. And the author does all that without ever outrigth describing their character-traits once, something which brings us neatly into the next category; Style.

And again, it's got lots. In addition to some masterful showing-instead-of-telling (a detail that many neglect to mention while talking about the concept is that you actually have to be good at showing for it to work), the narrator has as much snark as any of the characters. An example of this is when Kajulan tries to convey a decently sized paragraph's worth of feeling to Tekole with a look, something which, as the narrator helpfully notes, is quite hard.

And finally, we have the grammar, which I don't have much to say about. It seems perfect to me, but I'm not a native English speaker, so what do I know?

If you've read this far, thank you for reading my review, upvote to receive half of Malaysia for free, and if you decide to read this story, and like it, I highly recommend reading Mr. Orange's short stories as well, particularly Old Bones and How to Befriend a Goblin.