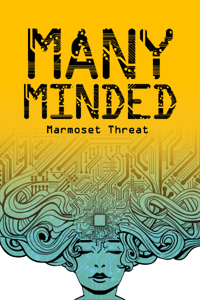 Issa Pyxis, Spacer orphan and illegal heretic, graduated from living on the streets to running with a gang years ago, but now it looks like that’s all going to change. Her inheritance, more specifically who—or what—she is, is catching up with her, and on a planet with the Emperor’s inquisitors slinking around in every shadow, nowhere is safe and no one can be trusted. What will she do?

A cyberpunk story about identity, loneliness, covert infiltration, evil dystopias, and much more!

The future is cool, AIs are kickass, and questions about consciousness are simultaneously existential and yet unanswered. To me, this story is a vehicle for exploring these topics, and also, I wanted to write a story where the protagonist was unafraid of themselves and where their self is more like a git-repo than a meat computer.

This story primarily takes place in what we’d describe as a “cyberpunk dystopia” with some extra technocracy, autocracy, and religious fervor thrown into the mix, so there will be some “grittiness” in this story. Caveat emptor.

Also, [insert your favorite boilerplate “views expressed” disclaimer here]. I shouldn’t need to say this, but the main character and other characters in my story can be wrong on occasion (gasp!) and the way they view the world isn’t always objective truth (if such a thing even exists) nor do their views and opinions necessarily reflect the views of me, the author.

Cover art by me!