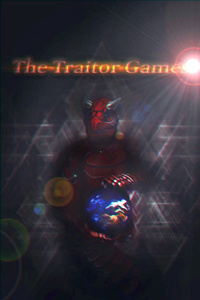 The figure moved to the center of the room and began presenting what sounded like a scripted speech. "Welcome, and congratulations on being selected as participants in the games. Our deepest apologies for the manner in which you were brought here, the installation of your new UI can be traumatic to some, especially given the new introduction of your species and so sedation was deemed necessary. Your UI will begin populating shortly after the conclusion of this presentation. There may be some pain associated with the install, resolving shortly after the completion of the update. Graz Corp is not legally liable for any symptoms that you might experience, including nausea, vomiting, migraines, insanity, and or the sudden urge to murder."

What kind of sick game requires you to drug people to get participants? And wait, symptoms including the urge to murder? This can't be legal.

The figure continued. "As participants, you will be a part of a broad array of games created using your culture. Players who wish to be successful must both be able to work as a team while keeping an eye out for those players given tasks to distract from, disrupt, or derail the objectives. Rulesets of games will vary, with some games allowing these designated traitors to kill participants. Fear not, however; as our medical support systems will allow up to total reconstruction through the chip implanted upon your acceptance into the games. Each participant is graciously granted 3 initial lives, after which they must either be purchased or permanent death will be risked. Do well on either side and earn points to purchase rewards, advantages, and other benefits. Your only limiter is your performance, which will cap the number of points you can earn from any given game. The android assigned to moderate this game will now assign your roles and summarize the rules"

Well, it seems I've been put into a death game. Just my luck that I would get dragged into something like this. Okay, okay calm down. Let's think through this for a second. There are two possible options here, either some sick bastard has kidnapped a bunch of people, transported them to some isolated snowy area for us to kill each other off for his amusement, and believes that they can somehow reconstitute a body once that person has been killed, or we are dealing with some other force with a much higher level of technology than us. Based on the android, my bet would be the second. On the bright side, at least the old man over there isn't completely crazy. His reaction was a bit extreme though, which means he either had a glitched UI, or something else is going on. There was never any mention of what happens if either side fails to complete their objective, but it's unlikely to be anything pleasant if they want to incentivize a traitor to work against the others.

Scenario: You were part of a group tasked to capture wildlife for tagging when you see signs on the instruments of an approaching mega-storm that will be arriving within the next 24 hours. Trying to radio in for helicopter evac, you discover the radio has been tampered with, and you can only assume the helicopter pad has as well.

Text appeared right in front of my eyes, and as I read further I became more concerned about our chances. How was a bunch of random people supposed to complete both of these tasks? I might be able to muddle through it by relying on my engineering background, but other people wouldn't necessarily have experience in repair. Looking around the room, it seems the others are coming to the same conclusion. I try to see if I can tell who would have been assigned traitor, but no one speaks up, and I can't see much else aside from dismay on the group's faces. The android continues.

"The rules for the game are as follows. Traitors must prevent the other team from escaping through any means possible. 4 parts will be required to fix the radio station, located in various buildings nearby. A map has been provided with general locations. After fixing the radio station, the helicopter pad must be repaired using Grax Corporation's patented printer. It can be used by simply attaching the apparatus to the helicopter pad and waiting for some time. Grax, the company provides for you. Various crates with useful supplies have been spread around, including medical technology and weaponry. The wildlife is aggressive and will attack so finding some sort of weapon will be prudent. Traitors will also have access to a system allowing them to unlock hidden caches. These caches will hold special supplies to hinder the other team but will make audible noise when unlocked. Traitors and survivors will either be rewarded or punished based on performance, up to and including loss of one of your lives. Your twenty-four hours begins now."

"Do you even know who I am? I'm Luna Preston. You have no right to hold me like this. I refuse to participate in this nonsense and demand you let me go" Seeing that being belligerent wasn't working, she quickly switched tracks "There must be something you want, I'm a famous actress and wealthy enough that I can double whatever the person who hired you is paying if you help me. I don't want to die. What would my fans do without me?"

This girl was a real piece of work. She kept trying to convince the robot that it should go against its programming while I tried to think of a plan.

My first instinct was to immediately run off, check the map and then attempt to get the objective done solo but thought better of it. I don't know what kind of animals are out there, but it would likely be better to have someone with me, even at the risk of them being a traitor. Allison was also moving to try and organize groups to go to the different sites. Greg and Dave paired up immediately, leaving Allison, Emma, Luna, who was still going at it, and myself to divide up. The big man whose name I hadn't gotten made no indication he had even heard the speech, continuing to stare out the window. Crazy, as I had dubbed the old man in my mind, looked like he was starting to come back to his senses, though the muttering was continuing. Better to leave him here to put himself back together.

"So, who gets her?" Allison indicated Luna with a motion of her head.

"Maybe it would be best just to leave her here for now and move as a group of three?" Emma suggested. It wasn't the worst idea, having three together would mean it would be easier to cover each other's backs, and it wasn't like Luna would be much help at this point.

"That's probably our best bet. Greg, Dave. You head to the foundry to the north. Try and loot some crates on the way there. The three of us will head south towards the watchtower." I said. "Keep an eye out for animals, we need to be careful."