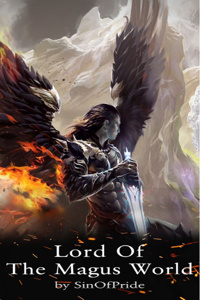 Lord Of The Magus World

"I heard that from a very young age, every young master from Darkmore goes through an extremely rigorous combat training." Dale's cold brown eyes scanned over the motionless corpse of Cody. He was tall with a heavy build and had short dark hair. Trapped over his tall body was a black cloak.

From the beginning, he had been watching over the distance and got to witness Seth's abilities. However, even after removing the notion that they would be fighting a 9-year-old boy, Seth's skills were something he was forced to acknowledge.

Vled who also had a cloak over him, immediately scoffed. "In my opinion, that bloodline spirt is much more of a problem."

Bloodline spirits were innate abilities inherited at birth. In general, if one of the parents possessed a bloodline spirit, there was a possibility that their child would inherit the same spirit. They were unique and came with various and unique abilities. They might not be all combat-oriented but were very versatile.

The 'Ghost spirit' was unique to Darkmore clansmen and was only possessed by them.

They also brought great advantage to their wielders. This could be seen through Seth, who easily escaped all of his enemies' attacks by transforming into a black mist.

Seth walked towards the corpse of Cody and picked up the large dagger that was smeared in blood. He then played with it. "Why aren't you attacking?" He asked with a very innocent face.

"…" Raia stayed silent and looked at the group before making a small nod. "Let's not delay this any longer."

Immediately, large waves of wind blew over her as small electrical sparks went through her sword. Raia then bent her body before sprinted at Seth.

Seth calmly lifted his sword and swung it at the incoming enemy.

A heavy sound of metal hitting sounded as Seth instantly got pushed away before softly landing on the ground. He then opened his palm. "Abyss magic, Demonic sword." Immediately a black sword took form on his left hand. The sword looked ancient and had some terrifying patterns on the grip.

Raia raised an eyebrow but quickly regained her composure. She then continued to trade blows with Seth. The two kept clashing, and each time a large banging sound was made.

Dale, who had a heavy build, suddenly let out a roar as his body went through a transformation. Long claws started growing on his hands, his teeth sharpened and became fangs, and his chest grew bigger as some fur could now be seen.

His final appearance was akin to a feline. Dale immediately pounced at Seth and used his long claws to send all kinds of vicious attacks. His claws were very sharp and hard and would easily counter Seth's sword.

Seth who was already facing Raia got even in a tighter spot. He also couldn't create distance as multiple arrows would mercilessly come flying at him. Slowly Seth seemed to be pushed in a corner.

Meanwhile, outside the mansion, dark clouds covered the sky. Bathed in the light of the moon, the vast mansion was more beautiful than ever.

Suddenly figures all wearing black cloaks appeared in front of the mansion. They all had hoods covering their heads, hiding all of their features. Ahead of them, there was a man with long blonde hair. The handsome man was none other than Dray. With his hands lightly raised, he seemed to be chanting in a mysterious language.

'This took much longer than I expected…' Dray then looked at the hooded figures behind him before asking, "How is it?"

"Almost done." replied one of the figures.

Dray nodded and looked back at the mansion. He wanted to turn back and leave. His spell wouldn't be broken as a result. However, to fulfill his role, he had to stay till the end.

Compared to what he had said, this operation wasn't targeted towards Seth. However, his employers felt like it was better to create two diversions while hiding the true purpose.

The latter diversion, which was aimed at assassinating Seth, would then be disguised as their real objective. To make this as believable as possible, they had also issued a quest towards countless organizations and put an enticing offer of ten million.

To fool your enemies, you must first fool your friends!

Suddenly, bathed in the light of the moon a figure slowly descended. The figure was clad in elegant black clothes, had long black hair, and was very handsome. He gave off a grand and majestic feeling. There was also an oppressive aura around him.

Dray looked at the figure before performing a very respectful bow. "Your Grace. It is an honor to finally be able to meet you."

The figure was none other than Auron Darkmore!

With a cold face, Auron looked mansion which was now surrounded by a translucent blue light. There was also a large magic circle filled with complicated patterns rotating above.

Even as he stood meters away from the mansion, he felt like the building wasn't even there. However, he also knew that this was but a spell. He turned his face and coldly said, "Lift that off." His voice was low yet highly commanding.

"Your Grace, I am afraid that won't be possible. At least not before we can accomplish our goal," respectfully replied Dray.

Just as he finished speaking, a horrifying pressure descended on him and everyone around. It was like his back was suddenly carrying a whole mountain.

With each second that passed, it was like a whole other mountain was added on their backs. The pressure was so horrifying that the ground itself was shaking. Many were already on their knees, while some had already collapsed. Dead.

With blood trickling down his lips, Dray struggled to lift his head. However, just as his eyes met with Auron's, his head got forcefully pushed down.

He coughed a mouthful of blood.

This was ridiculous. He had already been a Rank 5 Magus for so long, but he was unable to stand in front of that man. Dray could only smile bitterly. However, it wasn't like he had come unprepared.

With some difficulty, Dray opened his mouth as words slowly escaped. "Shift!"

Instantly the invisible force that had been pressuring him and the others vanished. Dray immediately flew in the air as a thick book quickly appeared floating ahead of him. The book then opened and flipped pages before stopping somewhere in the middle.

A streak of lightning streaked across the dark sky. Immediately after, the weather which had been calm had thunderous booms echoing within kilometers. Then, blinding sheets of lightning lighted the whole sky.

With an ominous flash, a bolt of lightning tore through the sky and came crushing towards Auron. However, it was stopped by an invisible force midway.

Despite this, there was a light smile on Dray's face.

Auron lifted his head and, as his lips gradually parted, looking at the scene just above him.

Auron remained calm as he leisurely placed his hands in his pockets.

As if enraged by this, a torrential storm of lightning rampaged on him. However, some would stop midway while others were restrained by black tentacles, which had started growing beneath Auron.

More and more tentacles started growing beneath his shadow. Although they lacked a form, they all had a pointy end. These tentacles then grew and started chasing after everyone around, including Dray.

Even as a hundred bolts of lightning rampaged above him, Auron didn't move. He then slowly turned his head and gazed at the gigantic mansion. Although his sight was being restrained by the spell, at his level, he could still make out of the few beings inside the mansion.

Auron guessed what was happening in the mansion. However, he wasn't especially worried. If their purpose in coming here was really Seth, then it was another reason to stay calm. As a father, he knew Seth very well.

How could he have not noticed the abnormality around Seth?

Because of this, he was sure that nothing would happen to him. Instead, he was even looking forwards to what kind of surprise his son would bring him this time.

As for the spell which was sealing off the entire mansion, he couldn't much about it. Well, it wasn't that he couldn't. It was simply that if he tried, the whole mansion and probably more would get seriously damaged.

However, if Seth was truly in danger, it wasn't like he couldn't do anything.

Auron then shifted his gaze towards Dray and his companions, who were flying everywhere around, trying the avoid the countless tentacles chasing after them.