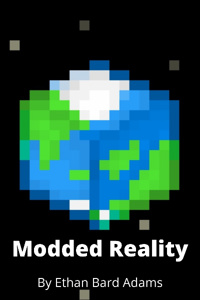 What if when you slept you could be in a game world? Loot, Level, and Lose yourself in a whole new universe as you Explore your surroundings, Expand your skills, Exploit the new resources and mechanics of the world, while Exterminating Monsters.

What if when you woke all the game mechanics, abilities, and your inventory came back with you? How would you use your newfound powers? Flaunt them or Hide them? There's no right answer. When your very reality becomes modded nothing stays the same.

This fiction is on my reading list for a while but I never got around to actually review it. In part because I have waited to give the author time to implement the private feedback I gave him.

Like fancyotter I met this author in a mutual writing group on discord where authors ask other authors for feedback. While there might be slight bias it's only because the score on RR is kinda messed up anyway.

All in all, it's a good fiction. Not a great one in my opinion but definitely not a bad one either. Let me tell you why.

Story: Pretty much the selling point of this fiction. It kinda reminded me a bit of the webtoon Hardcore Leveling Warrior where the dreamworld becomes a game world. Intriguing stuff.

Style: While I have no issues with the first-person narrative as I prefer it myself there are so jarring sentence structures. Or paragraphs that seem like the author inserted himself into it?

Also, it's pretty thick described. That is again a point of preference. I prefer t a bit faster-paced.

Grammar: I have no issues with the grammar.

Character: Now here is the meat of my critique and people have other opinions but in my opinion, the character work is what holds this fiction back. Except for the already mentioned seemingly self-insertion, I have one more complaint.

The narrative is too focused on the outside of the characters. While the first person limits the view and makes supporting characters stand out more difficult it is not impossible. I talked in detail about possibilities ho to improve it. And to the author's credit. he did improve it a lot.

Although it remains the wobbly point of this fiction.

Would I recommend this fiction?

I recommend the fiction wholeheartedly!

This beauty of a book bamboozled me mildly at first, until the minecraft references hit me and now I am at peace with the world.

I am a big appreciator of isekai stories, so this one def is a good cake for me.

This tasty tale takes place in a minecraft-like universe with the protagonist getting thrown into a litrpg setting and flapping between the real world and the minecraft one, being able to use his system, tools and skills in both. It’s a fun mechanic to read about and explores lots of opportunities for use of a litrpg system in the real world. People get surprised at the hospital when the protagonist gets healed for example, etc.

The style of the sentence structure is bothering me a bit because I'm totally not used to the the 1st person pov with present tense prose and dialogue. Some word repetition is happening too, is there an app to track repeating words I wonder? I could probably use one myself as an author as I personally suffer from these sorta word repetitions in my books.

No visible horrid mistakes and the author is constantly updating and retouching chapters as you can see by the title updates. Wish more authors would be so diligent with this sort of a thing, tracking updates whenever they occur and making sure mistakes are fixed.

The characters are very wholesome. The world they live both - the minecraft and the real feel very believable and solid. MC, Rupert feels a bit self-inserty, but still believable. I like how he brings his dad into the minecraft-fantasy universe. Wish the character depth would be explored more.

Lots of exciting zombie battles and interactions with villagers. Good old litrpg charts, but with minecraft style things. A big part of the activity is crafting things, as one would expect. The fun bit of this book is as the title says is modding of reality as Rupert begins to change stuff in the real.

If you enjoy minecraft style games and litrpg and isekai themes I definitely recommend you check it out.

A quick note. I met this author through a mutal writing discord and we've become friends throught our common hobby, but I remain honest in this review.

As the title states, this was a first impression. The first chapter was pretty long, so I only read that. That being said, you really get a good grasp of what this story is leading to with just the first 5500 words.

The story is the usually litrpg. Game mechanics strongly present in the fantasy world, but it also takes place in the real world as well. Both the dreamscape of the video game and real world end up blending into each other as the story chugs along, culminating in a fantastic scene towards the end of the chapter where the MC struggles to stay afloat in either world. Wonderfully done was the highlight of the chapter for me

The author chose to use the ist person pov with present tense prose and dialogue. Unfortunally it comes off clunky and jarring for those not used to it such as myself. Its his choice to write the story this way, and I admit, I eventually got used to it after halfway through. What I couldn't get used to was the liberal uses of words such as "hums", "text", and "says". They come up so much that I wish the author would use other words to change up the dialogue, keep it fresh.

For a first draft, I didn't really have any complaints here.

In the first half of the chapter, we know absolutely nothing about our main character. Emotions, personality, inner thoughts are thrown away to make room for an aboundance of game logic and heavy amounts of dialogue. However, we get an good dose of all this from the ending half, and as I've said before, the writing change up was a welcome refreshment of good story telling that the rest of this litrpg was missing.

Over all, if you have trouble dealing with the first half of the long chapter, let it be known the 2nd half is well worth the wait. It carries the chapter on its back and score the game winning touchdown with me, no joke, its real good.

I see potential with this story, and If the idea is to play with the concepts of reality, I think this story will go far. 4.5/ 5!

Makes me want to go back to Valheim.

It took me a long time to work through my reading list and get to this story. When I did start the tale, I couldn't put it down and binged it in one sitting. I wanted to give the author time to get more content out as well and implement the edits Bard intended.

Terrarria and Minecraft weren't my cups of tea. This was mostly due to me associating the game with immature audiences, but I've since learned that I was wrong. My introduction to games of their kind was Valheim, and I've been enchanted with the survival building genre ever since.

Modded Reality took me back to the hours I spent moulding my digital world to my design.

Story:
The story is standard LitRPG fair. However, it does a good job blending the real world and game world, successfully drawing the reader into both. The author does a brilliant job of presenting the protagonist's experiences benefits across all realities but struggles with the odd occurrences too.

Style:
First-person present tense is one of my pet peeves. My rating in this section might come with bias and therefore doesn't influence the overall rating. The execution did feel a little bit clunky, but the story was interesting enough for me to get through, though.

Character:
This section is the only reason why the story doesn't get 5 stars. Game logic and explanations take priority to character development. This is a jarring issue in the opening chapter. It makes the first half a chore to get through. However, the author makes up for it with the second half.

Overall, I think the author is doing a good job for someone new to Royal Road. I look forward to them sharpening their story-telling skills.

I always love survival and crafting in games. Even more when it is on stories i am reading.

And this awesome story got it good.

Think about Minecraft with RPG and Technology mods on it. That's the good stuff. You get to do some surviving, some building and crafting that, as a "real life" story, let's you build anything if you got the resources for it. I myself would have built a mob farmer first thing in this world XD walled around the village and made torches lit it all at night :) but that's me. A gamer that know Minecraft like any other...

The MC (and the other characters) are discovering it from the ground up. They do their best to develop and survive. And the survival isn't just in the dream parallel world... they got to survive real life threats too. The story is on it's (awesome) beginning... but the immense potential of it is here.

This is Terarria and I love it

Man, it's a cool spin to the whole isekai gameworld vs. reality. Most go for a standard RPG or fantasy setting. This feels like terarria. Sure there are plenty of RPG elements involved, but I'm still getting those expanding your domain in the same sense as I do playing terarria.

The book is based on modded Minecraft, so I can definitely see that it encapsulates that feeling well.

Grammatically and stylewise, it gets the job done. No grandiose description or complex sentences strung together, but it doesn't need to. The story gets its message across perfectly. Even as the game and real-life get melted into one, it doesn't feel confusing. I haven't really seen any major mistakes, or that would break me out of my reading either.

The only thing I wouldn't have minded is just a slight bit more variation in word choices during dialogue. Other than that, I'm pretty satisfied with the way it read!

I'm curious about what the end goal would be for the MC, I get that he's just trying to live his life but I feel like there's bound to be more to get invested into finding out what happens in his life. But that will obviously get expanded upon as the story progresses, it's still in its infancy after all!