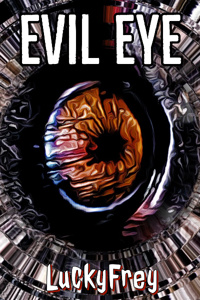 Angelina’s private room left me in awe. It had the most luxurious looking bed I have ever seen, replete with a feathered mattress and fur blankets. A full sized dresser with a full-length mirror stood next to it, and I unexpectedly got a glance of myself at full height. Florence smirked at me and quirked an eyebrow when she caught me stopping to look at my reflection. I just shrugged amicably and caught up to Angelina and Elmont.

It was the balcony that really took the cake. Half of a glass bubble stuck out of the hull of the barge, just to accommodate a sitting area for the person who had this room. A long circular sofa sat in the center, allowing for the occupants to enjoy the view while relaxing.

The first thing that Angelina did upon entering her room was to stride toward the balcony and throw open a sliding window panel. Fresh air flooded in, cooling the bubble, but not so much that it stirred our hair.

“Next life, I want to be born as a noble just so I can have this room,” I said, to mixed reactions. Elmont scoffed, Angelina giggled, and Florence checked the paint on her nails.

Angelina produced a bottle of wine that probably cost more than my childhood home, and I rested back on the sofa, savoring each sip. I could tell it annoyed Elmont, who continued to sit ramrod straight like he had a broom glued to his back. But I did not let it bother me.

“So, Elmont, what do you study at Ashmere?” I asked politely. Father always said that nobles loved to talk about themselves.

Elmont cleared his throat, then said, “Medicine, mostly. My class is [Apothecary].”

“Interesting!” I said. And it was, I did not expect that a noble would take a regular class from a god other than Erzaal. “I naturally assumed you had a noble class.”

“I did not like what Erzaal offered me,” Elmont said neutrally.

Angelina laughed, and joined the conversation, “Elle here got offered the chance to be a [Knight]! A class many nobles would absolutely kill for, but he wanted to spend time with his dreary, weary old books,” Angelina topped that off with a tug on his handlebar mustache, which everyone except her noticed made him livid.

Despite his clear disdain for commoners, his choice in class made me like him more. Tradesmen classes like his could only be obtained from the Guild. Valis the god of craft and art, and his wife Solmena, the goddess of knowledge and poetry, only allowed their Godstone to be accessed by members of the guild. Most of its members were select merchants and wealthy commoners, but it would be easy for a noble to become a member. In Ergentein, nobility gave legitimacy to things they took part in. Still, it had to have been hard for Elmont to lower himself to join an organization that he probably looked at as being a bunch of uppity common folk.

“What about you, Angelina?” I asked.

Angelina, ever the dominant conversationalist, pounced at the opening and said, “I just sort of take whatever interests me. This year I think I’ll take cooking, and pottery. I spent most of last year studying weaving and fishing.”

“Oh yes! My class is [Gossip], and you would not believe how much old fishermen like to talk. Especially to a young impressionable girl.” She winked.

“[Gossip]?” I asked. Most of the classes, even the non-ascended ones, existed to help with the war effort in the Ruinlands. Ranking up without going to the Ruinlands was a difficult thing to do. One would have to rely on Quests, which were sporadic in both number and reward. Someone like Elmont, for instance, could spend his time creating potions and salves that would heal the combatants in the Ruinlands and gain essence through his actions from afar. But how would a [Gossip] do that?

“It’s not as difficult as it sounds, promise,” Angelina said. “Every so often I do a little tour to lift the spirits of the troops. While I’m there, I listen and just talk to people about what I’ve heard. It’s all about getting the right information to the right people! Also, it is really fun.”

Emboldened from drinking too much wine, I lifted a glass and toasted, “To doing what you love!’

Angelina and Florence joined me, Elmont brooded. Florence had grown more withdrawn the longer the conversation went on. I noticed she was an almost entirely different person than the girl that greeted me happily at lunch. Of course, I suspected her of some scheme because of my ability. I resolved to draw her out of whatever she was planning.

“Florence, I have to ask, as honored as I am to be here, why did you ask me to join you?”

“It was my idea,” Angelina jumped in.

Elmont glared at her, his blue eyes shining with anger. I bet the “me” of two days ago would not have evoked such a reaction.

“Oh, don’t be a sour patch, dear! We three have known each other for years. I just thought it would be fun to have someone new around to mix things up. Besides, it worked out, right? We are all going to the same place, and can be the very best of friends.”

Something told me that the four of us were not friends, much less very good ones. Though I did like Angelina.

Florence stood up and said, “Well, it looks like we are all out of wine. Please, allow me to get the next bottle.”

The foul stench came back from her, a little stronger than before. So, I stood with her. “No, I think I have had enough. I’m not much of a drinker and think all this wine is getting to me. I think I’d like to go lie down in my room for a while.”

“Nonsense! I won’t hear of it,” Angelina said. She stood up and walked over to a cord on the wall and began yanking it to summon a servant.

“Let the boy go if he wants to go!” Elmont said in a loud voice, bordering on yelling.

“You mistake me, darling. Of course I’m letting him go. I just won’t have our new friend dumped back into a tiny commoner room. Not when there are so many of the noble rooms unoccupied.”

Before Angelina could reply, an arcanorail servant entered the bedroom, and she seemed to have forgotten Elmont altogether. “Could you please move my friend Harald here from the common area into one of the noble rooms, please?”

Elmont brushed past the servant in a fit and left the room.

“Stay right here! Please, I’ll be right back,” Florence implored me, and rushed to the room across the hall.

I looked over to Angelina, then said, “Uh, I’m going to go lay down now if that’s okay.”

“See you at dinner, Harald!” she said.

There went my plan to hide away from them the rest of the trip.

I did not join them for dinner, instead deciding to pretend to be ill. Even if Florence was not attempting to do something untoward, being able to have a view bubble all to myself was far too enticing to want to get up.

I almost thought I had gotten away with it.

An hour before midnight there was a quiet knock at my door. I got up and made my way to answer, or at least look to see who was visiting, but stopped myself midway. Why bother? I could just ignore it. The lights were already off, and it was late. Whoever it was, would surely conclude that I was asleep.

A jingling sound at my keyhole, followed by a set of keys being dropped on the floor, ruined that plan of action. The knocker was going to invite themselves in.

I ran over to the cord that called servants and yanked it hard, then retreated to hide in the restroom while I thought things through. Hidden in the bathroom and staring out of a keyhole did not leave me with many options. What I wanted most was information. I had already decided that Florence wanted to poison me. Her continued insistence on a special bottle of wine made the conclusion obvious.

As quietly as I could, I whispered the words for Detect Poison, then followed up with the spell Detect Magic. Mental exhaustion descended on me, but I felt that the spells had taken hold.

Not but a moment later, the door opened and an unsteady Angelina walked into the dark of my room next to a very sober-looking Florence. My evil eye let me see their features clearly. Angelina’s eyes glazed over, looking not drunk, but drugged.

Oddly, I did not sense the poison I expected.

“Harald, I need you. I need to feel your lips on my skin,” Angelina moaned. “Where are you, Harald?” Her hands moved over her body, like she was imagining me doing just that.

“Harald, are you here?” Florence parroted. I watched her reach out to throw back the blanket on my bed and finally caught a clue. Her hand was glowing red to my Detect Magic spell.

The words popped into my mind.

Florence was an ascendant.

Why did she want me to bed Angelina? Did she want Elmont for herself, or was there another, more sinister purpose?

It did not matter. Two could play that game. I hit Florence with Haunt and felt the curse seep into her. Nothing happened for a few seconds, but then she stiffened and looked towards a dark corner of the room. “What was that?” She asked.

“Uhhhh, I hope it was h-handsome Harald.” She giggled. “I want him to fill me to bursting with his seed.” Angelina added unhelpfully.

A double knock on the door drew their attention. Angelina shouted, “Harald!” Then stumbled to the door to open it before Florence could stop her. The servant I called stood on the other side of the door, saying something to Angelina, but I focused my eyes on Florence. She was nervous, and I could tell she wanted to leave the lightless room. First, she walked out moderately calmly, but then something happened in her head, and she nearly screamed, “Time to go!” And grabbed Angelina, practically bowling over the poor servant.

After they left, I grabbed my things and fled back to the common area.