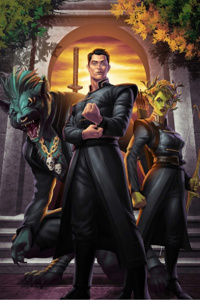 In a broken world, once ruled by almighty Mage Kings, the chosen of the Gods are all that hold against total annihilation.

Harald Horste, a naïve young man, humiliated, broken, and penniless, inadvertently changes his fate with a single act of spite, finding himself drawn into a life of conflict. Demon cultists, savage monsters, entities of the abyss, and more threaten the lands of men from the remnants of a long dead empire. For Harald, beloved of the goddess of misfortune to survive them, he must attend the academy of Ashmere, while nursing the pain of a lifetime of mistreatment.

Join him in his struggle amongst scheming nobles, undead horrors, and the ever lurking threat of the Ruinlands.

NOTE: This story is for the April national writing month contest and it is a Rough Draft! I appreciate all feedback, whether it be for typos, plot, pacing, and so forth. It has some light sexual content. It contains no Harem or Murder Hobo MC.

Tl;dr: It's a really solid story with a lot of room to grow. It's early days yet in the story, but it has dodged all the typical pitfalls. It's an easy read, so give it a try.

Style: Written in first-person with a well-done flow. It's nothing unique, but for me that's honestly a relief. Simple, communicative, great language. Full marks!

Grammar: Impeccable. I haven't noticed anything, and the story reads without any hiccups. If you're picky about language, you'll have no qualms.

Story: There are a few story points that seem like they could be a little contrived - but only mildly, and early chapters deserve some grace from having to explain themselves. Hanging plot threads are few, and minor.

Character: The characters have attention to detail. There are some tropes, but nothing egregious, and they deserve time to get fleshed out before being judged.

Overall, the story hasn't had time to become great, but the fact that it hasn't made any mistakes in the 16 chapters I've read so far is a glowing gold flag. It's easy to get into, so give it a try.

Spoilers, and for the author:

Great work! The only things I noticed were that Harald did seem to get over his 3-month obsession with that girl pretty easily, and I got the impression his father would be a bit more involved in his son's life (but that could be a mischaracterization) but hasn't shown up yet. On a different note, mind-affecting powers are quite scary (even violating), and yet Amorous Touch was sort of waived off. Is it going to be adressed, or are mind powers just accepted?

Edgy in a good way

This is a story about a ugly dude who in a drunken rage punch's a "class stone" thing that most people assume as suicide. But the mc is loved by misfortune and gets a curse class and the class,system and lore so far is amazing it starts worse then it is on purpose as it adds to the misfortune feeling. Please give it a try and keep up the great work author!!!

This has been a pleasure to read! Interesting characters, a well thought out system, and a compelling story so far.

There are minor nitpicks; I've noticed that a lot of authors on this site have trouble writing memorable, evocative descriptions of women. This author is no exception. There are other words than 'beautiful'.

Can't wait to read more, however!

Read it: is good

Its just really good, read it.

The review minimum is both annoying and unnecessary for this story; this is mainly due to how utterly enjoyable the story is which should be (on its own) enough to bolster it into 1st on trending. Read it.

story changes in a snap of a finger

The story spends several chapters describing how ugly he is. This was something that affected him greatly throughout his life. Then, in one magical poof, he is now extremely handsome. Why? Instead of overcoming adversity or learning how to deal with it, his problems were waived away like magic. The entire plot changed at that moment.

So this is really good. RoyalRoad quality seems to be improving every year. Grammar is fine. I knew based on the synopsis this would either be terrible or an awesome addition to RoyalRoad--thankfully it's the latter. MC is rational but also not a robot. The side characters all have a lot of personality and are both memorable and distinct (Angelina all the way).

Worth a read -SPOILERS-

Evil eyes follows all the usual isekai tropes without the isekai.

MC gets blessed by a God for having a rough start, magically gets super hot, and goes to magic school with aristocrats.

I have no idea how isekai's I've read over the years, yet this one feels fresh.

Very realistic and good plot setting which I think many of us like.The Mc starts off experiencing the harshness and unfairness of life be it his looks and how the community treats him as a outcast. I really am looking forward to how the book unravals.This book most likely will take a solo character where everyone dislikes the Mc which gives the Mc the reason to chase power to never be scorned upon ever again.

I nearly wizzed from laughing

This story is the epitome of the phrase "be carful who you call ugly in high school". it's beautifully decriptive and weaves a tapestry of words that left me painting portraits in my mind. The mc Harold is funny and believably honest and kind in a way that doesn't feel forced or "marry sue"ish. I was worried that once he became pretty this story would turn into just another magical harem story but instead it subverts the trope and hyginx ensues with women freaking him out with their advances and men hiding the pudding.(you'll understand later)

Every side character gets equal attention to detail and you truely get a sence for how the world works. so far the story itself is just starting but the lore is facinating and well spread out instead of being shoved down out throats in an info dump.
and above all the humour is steller, nearly every joke lands perfectly, and the magical god governed format of the world makes those situations more believable. the drama is also sutibly tense with atmospheric forshadowing that sets the tone well.

the most interesting mechanic of this story is probably how it handles the Gods. in this story people touch magic rocks and if certain requirements are met they are granted the acknoladgment of a God or are sent into a monster infested warzone. those selected by those gods are gifted abilities and god created quests. on that note, quests seem to be extensions of that gods will or domain, which I personally find helps bring characterization to people we hardly know and further expands the lore in an easy bite sized manner. I am infinitly facinated by how the quest mechanic has been used so far and look forward to more!

Pure wish fulfillment and logic is kind of off with how the characters act in my opinion. Its fine for people who like it but it's not my cup of tea. I would say read it up to chapter 5 to 10 to see if its your kind of novel.