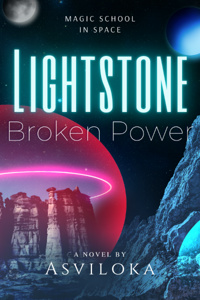 ON HOLD FOR NOW

Sometimes people end up with too much power to be allowed to remain safely among normal magical society. For the safety of everyone involved, a secret magical academy was established on one of the moons to serve the dual purpose of protecting our world from alien incursions and safely training those with abilities beyond the ordinary.

That's where I come in. Surprise, I'm someone who isn't supposed to exist. Someone with more than one powerhue, capable of overcoming ordinary mages with ease, with potential near-unlimited. I was sent here when my new powers unexpectedly manifested.

Only, not everyone here seems to understand who they're dealing with. They think that being here makes them better, that their seniority is something to boast about. That I'm no one worth considering.

But they don't know what I've done. They don't know who I am. I may be untrained and off balance for now, but one day they'll realize... crossing me? That was a mistake.

I bit off more than I could handle, trying for three simultaneous projects. Lightstone will be paused for now until I can give it the time it deserves.

(Shares a setting with Bloodshard, but both books are intended to stand on their own. New character, new setting, new plotline.)