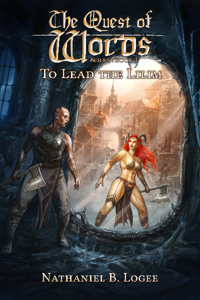 The Quest of Words

This is a story about a regular guy who worked in a call center.  As you might expect, he hated his job.  Then he was dropped into a fantasy world right out of the games he grew up playing.

Unfortunately, playing a game and living the life of an action hero are completely different propositions -- even if the world plays by gaming rules.  Now stranded in the middle of no where with a class he does not understand, a menu system that's a little too loose, and no idea how any of it is supposed to work, follow our 'hero' as he stumbles his way to greatness.  Eventually.

Author's note:  The tags are there for a reason.  If you are uncomfortable with sex, cursing, or slow mental and physical transformation, then this story will not appeal to you.

Note:  While this is not my first attempt at creative fiction, it is the first time I've attempted to post anything for public consumption.  So be nice :)  I appreciate constructive criticism and I will answer non-spoilery questions as I see them.  This should be considered a rough draft for the time being.  As such, the story is subject to editing and other changes as I feel it necessary.

I am posting this mainly as a way to keep myself motivated.  If any of you like the story, do let me know!  It gives me a reason to keep going.

I do not own the cover picture.  I am only using it as a place holder for the time being.  If the original artist requests it, I will of course remove it.

Reviewed at: Chapter 13 - Puzzles and Prizes

Overall a very interesting go at an Isekai. The MC is a college educated office drone, who ended up in a glorified call center. Like any good Isekai that makes it easy to empathise with at least one facet of their prior life.

Now as the guy gets dropped into the LitRPG world he figures it's best to let summons fight for him and gets a class accordingly. That class is what the story is mostly about. It's a Lilim Trainer, which allows the protag to claim defeated foes (and IIRC volunteers) as their Lilim and allows him to order them around. Now this has potential to go into pretty dark places since it's effectively a slaver class, but there's where the personality of the MC and the handling of the author comes in.

The MC got a solid moral code and is a pretty nice guy, so this story doesn't have the usual anti-hero asshole turn-offs. Also his first Lilim kinda had it coming, but also isn't an unsympathetic monster.

Honestly, the whole setup reminds me of Pokegirls (though the protag is the only one with a class like that so far) only without the Grim Dark and the Stupid. The Mc actually needs to build a relation with their Lilim, he can command them around, but there seem to be limits to that. There's misscommunication but the Lilim retains their free will and doesn't just become a stupid haremette. (I hope it stays that way)

The only criticism I have is that the story is pretty slow paced. This helps a lot for building the relationship between the protag and his Lilim, but it also means progress takes a long time.

Overall a great story that I can absolutely recommend, but if you're terminally allergic to gender bender or mind-controller storeis you should probably keep away.

Reviewed at: Chapter 12 - The Sand

Refreshing system and likeable main character that isn't a snowflake and neither one to get too high on his white horse, ( which is something that is starting to get on my nerves considering how common it is becoming  among RR novels ) make this already a good option if you want something to read.

As about the story in some way it's able to get you immersed even though some things just feel let's say...off. Still nothing too bad and the author has some potential as a writer compared even to the big boys in this site.

Now that said I still wonder about one thing:

How is the author going to manage the whole male bandit described as a savage with disturbingly unsymmetrical face transitioning to a hot redhead the MC is bound to bang without readers going "that's homo/not homo enough bro"?

Gotta say there is already a nice vibe between the two but damn feels weird.

IF the Author pulls it off, and that's a big if, he deserves an award just for that.

pretty sure i am not the target audience, but...

Reviewed at: Chapter 15 - On the Road Again

preface: i am an asexual girl, and rather uninterested in reading about dudes (or anyone, really, but dudes is where it usually comes up the most) getting into physical relationships.

going by the tags, and off of the surface premise, there should be nothing for me here.

while what's actually going on is rather exorbitantly foreshadowed for anyone paying attention, and a decent amount of the narrative as presented leans on crude humor, that somehow doesn't detract from the nuanced specifics. the real meat here is the slowly dawning "oh, wait, something isn't right" as the protagonist starts noticing things, dismissively at first, then putting pieces together.

the litrpg elements are competent, not entirely reliant on tropes, and have their own novel engaging elements.

the depiction of skyrimesque dungeoneering (with 'puzzles' that require 'solving') has been quite entertaining so far.

i've marked off slightly a little on style and story, primarily because while they are competent, they aren't truly amazing. in particular, the story is admittedly a bit propped up by the clever premise, and i think could possibly benefit from a stronger, less blatant buildup, and on the style front i think the juvenile humor isn't to my taste (but i can admit it's in service to the narrative, which is why i'm not harsher on it)

a full star off on character because while there's clearly a bit more to the characters than cardboard cutouts, we're not really seeing much of it yet. the rating i'm giving is as much optimism for how they could continue developing as a reflection of the currently presented state. but there *is* a visible trajectory here, and i can work with that.

grammar is of course not perfect (it rarely is), but better than several professionally published novels i've read recently. which admittedly is more of a reflection on professional publishing than our author here, but that's the standard we've got to work with, so. five stars you get, my friend.

summary: i'm here for it. i still don't think i've successfully captured why i'm here for it (because frankly i don't fully understand it), but i am. can't dismiss the possibility things might veer too far in a direction i'm uncomfortable with, but at this point i suspect if i get off the train it is far more likely to be because of my specific preferences, and not necessarily due to a failing on the part of the author.

Cant find fault with the grammar

Reviewed at: Chapter 12 - The Sand

Unfortunately that's the best I can say for the novel so far. I am in chapter 12 and maybe it's too early to judge (I believe at this point author has released only 13 chapters); I am unable to proceed further due to boredom.

As other reviewers have said, maybe it's a new take on the whole genre, but so far it has been boring hike thru' a forest and a dungeon. The author has made a dungeon boring, that's a first for me so far. I am unable to follow what the author is trying to describe and I cant see the grander picture.

Where is Gandalf, why have they not travelled out of the Shire/Two Rivers so far. Where are the trollocs?