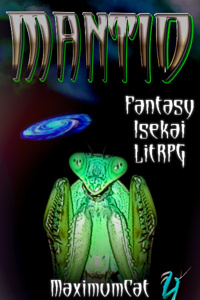 Michael is unwittingly selected to represent the people of Earth, as part of a test which will determine the fate of our world.

Murdered at 24, the depressed loner is reborn as Rihelah, a newly-hatched female mantis upon a strange world. Trees tower above her like skyscrapers, dragons reign as gods, and damn-near everything wants to eat her! Follow Rihelah as she navigates this new world, eventually finding herself embroiled in awkward situations, terrible conflicts, and major wars. The path toward strength and real friendships will not often be easy for someone suffering from depression, but with a strong heart and the will to survive, Rihelah does her best to stand against the dangers and challenges ahead.

NOTE: The "Gender-Bend" portion of this story is over and done with rather quickly for the main character. It's mostly there for lighthearted comedic purposes, and is not a major theme of this book. My reason for choosing to incorporate it in the first place - I actually love mantids in real life. I have kept many as pets over the years, and I understand their behaviors and a fair amount of their psychology and physiology rather well. I have always favored female mantids because they tend not to fly quite so much when they become adults. Also, they're bigger, and to me, bigger mantids are more interesting. I am an actual, former opera singer in real life due to the pandemic. And I'm a man. I have often heard it said, write what you know. This being said, the character's personality is not at all based off my own, so neither is this an author-self-insert book. I simply took a concept that sounded interesting to me, which fit extremely well with the world I intended to build, and ran with it. MANTID won't be for everyone, and that's OK. Royal Road has many thousands of excellent books to choose from. Rihelah will also not be a "bad girl" just because she was a man in her previous life. In fact, she is not intended as a romantic character at all, and will never be written as such. There will be other characters who delve into that aspect of things to some degree, but do not expect any sex scenes, because there won't be any. Think more along the lines of actual, lasting love developing between certain characters, rather than anything sexual.

[Participant and subsequent winner alongside many others in the 2021 Royal Road Writathon challenge.]

A few more things to note:

1. This story is dark at times. The major conflicts will resolve eventually, but that's going to take a very long time. Expect somewhere between 600-700 chapters at minimum. I have a LOT of content planned out.

2. There is a fair bit of death and suffering in this book. Rihelah doesn't receive godlike powers immediately, and there will be many situations she can only try to survive or flee from. Eventually that will change, and our mantis will become absurdly powerful. But it's going to take time, and lots of terrible things are going to happen along the way.

3. There will be situations in this book that some people may find traumatizing. Specifically, some characters will be harmed terribly by others, and not just in physical ways. This includes some of the primary characters in some cases. There will be justice most of the time, but it may take a while to get there. That said, this book will not include horribly toxic, chronically abusive relationships. Immediate conflict between individuals will resolve rather quickly once action begins. Awful things which have been done will often only be addressed after they have occurred. I am never going to write out a rape scene or show domestic abuse as it occurs. But people and other creatures will be harmed. Lots of them. This book includes a lot of war, especially later on, and war is hell. If you know a decent amount about our own world's history with respect to wars, this will come as no surprise to you. Many antagonists in this book are absolutely evil, and not in some silly, cartoon way.

4. If you want to support my writing, my Patreon has advanced chapters available. I am a former opera singer due to the pandemic, whose financial situation has been hit hard for quite some time, and I deeply appreciate the generosity of every person who has chosen to support me! This book will be available in its entirety on Royal Road not too long after all chapters are written. There will not be a paywall blocking the ending. It will simply be available sooner for patrons, because I'm poor, and it's nearly impossible to find any other work where I live. I hope to make a new career out of writing, and this book is my first attempt at doing so. I write approximately 12-14 hours per day, focusing solely upon this story. It has become a passion - one which I never knew I'd have until almost a year after covid detonated my career in early 2020. Thanks for coming along with me on this journey! :)

Reviewed at: Chapter 4: Escape and Fire

If I remember, I will up update this further into the story. Now, the review!

I just happened to notice this in the recent updates, and boy am I glad I clicked it. A unique reincarnation tale where the MC really has no advantages. There is already an intense struggle to survive from an insect perspective, and several unique characters that all have depth despite only having 4 chapters to work woth.

Grammar is on point, and if there were any issues so far I glossed over them while reading, they were that minor. The story flows well, with an excellent balance between action and worldbuilding. No infodumps, just the MC trying to learn and survive with no real help. The only reason I knocked anything off is that I can't justify full marks on a story with just 4 chapters.

Reviewed at: Chapter 4: Escape and Fire

Writing, language, and grammar are all top-notch!  Fun story so far, MC isn't OP...struggles and characters are believeable.  World building is good so far, there's character growth not only in the MC but in supporting characters as well.  I see a lot of potential here and I look forward to each chapter that's released!