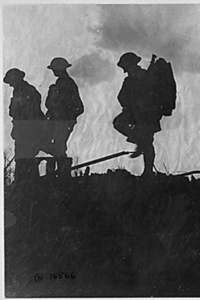 "So... this it?" Kurt asked. He, Keat, and two MIS had reached the area Mute had marked on the map. They had taken a scout helicopter capable of holding six passengers plus a pilot and copilot. Two could sit on a bench situated on either side of the interior, which held two people and was directly behind the cockpit.

It was aptly nicknamed 'Shrike' due to its small size but deadly payload. It could carry two 7.62×54R miniguns but had to sacrifice the two passenger seats behind the cockpit for ammunition storage. The one they had arrived in was unarmed, as they needed the extra space for any survivors.

They had landed in a clearing, leaving the helicopter, and made the three remaining mile trek on foot. Kurt would've enjoyed a long walk in a moonlight forest, had it not been for the limited visibility and possibility of ambush around every corner. With every tribal marked tree and wooden totem pole, he became more and more nervous.

He wasn't scared of the enemy, they had been like paper to his rifle. He was scared of the unknown that was always ten feet out of his vision. Even with the night vision goggles the pair had acquired, the woodland was simply too thick to thoroughly scout. Kurt reasoned that this was why the goblins had chosen it as their home, it was cramped enough for traps to be effective but just barely wide enough to use knives and small swords.

They came across few traps that mainly consisted of spike pits and the dreaded Molotov cocktail tripwire. They had been walked around and disarmed most of them, the remaining had been triggered prior to their arrival by wildlife. The MIS took photos of the creatures and sent them to base via a newly constructed signal tower.

It covered a roughly one hundred-mile radius before the signal began to fade considerably. It could transmit up to one hundred and fifty before the signal died out. It, along with the transport helicopter, had been constructed in the time between Mute's return and Kurt and Keat's departure. Roughly one day had elapsed.

"You see any other caves surrounded by ominous markings? No? Then we're here." Keat smarted off. The cave entrance was stuck into the side of a small hill, it was rocky and covered in totem poles and animal skins.

"Headphones on, don't wanna go deaf when we start firing," Kurt said, he pulled a pair of headphones that rested on his neck onto his ears. They were a noise dampener and radio all in one. The radio was designed for short-range transmissions within one mile.

"Right, putting the boys on standby," Keat said. He put the headphones on and tapped his datapad a few times. The MIS responded accordingly and stood by the cave's entrance, they looked out into the wooded area and watched for disturbances.

"What're waiting for? Aren't you going in?" Kurt smirked.

"Fuck off." Keat chuckled in response.

The pair of men moved carefully into the cave. It was not much taller than Kurt and only a bit wider. They walked in a single file line with Kurt watching the rear with his shotgun. Keat tapped the top of his SMG with his thumb as he gripped it, excitement had a grip on him just as anxiety clung to Kurt.

But as the pair advanced further down the cave, they began to smell something. Kurt would've described it as a pile of toasted shit. Keat thought of it as the smell of pure death. Neither were wrong.

Several humanoid corpses dotted the room, the floor was covered in a layer of what looked to be blood, piss, and some other white viscous fluid. Many of them had been stripped naked with visible bite marks and chunks of flesh missing. They bore semblance Fuku, with all of them having fox ears and numbers of tails.

"Christ..." Keat muttered. He was fond of killing, but something like this shocked him to his core. He had always been in and out, going with the flow of adrenaline, never stopping to humanize a corpse. But he had to in this cave, there was no other option but to see death. The only path forward was paved in blood and corpses.

While Keat was shaken but managed to just barely hold back the bile that burned his throat, Kurt was utterly horrified. The man had seen all matter corpses. Decaying corpses, artillery shelled corpses, even burned corpses, but what really got to him wasn't the death, it was the way they died.

The corpses had been toyed with. Kurt knew to go to the throat, brain, or heart to kill, but none of these places bore wounds. Wounds covered their faces, chests, arms, and legs. Not even genitalia was safe from the torture. They were carved into, crushed, and some looked to have been chewed on.

Kurt had vomited upon entering the room. The sight, smell, and sloshing sound beneath his feet had overwhelmed him.

"Shit... you good?" Keat kneeled down to Kurt's hunched-over form.

Kurt sounded out a meager 'no' as he wiped tears from his eyes. The man had seen wrath in the form of war and the efficient slaughter of thousands. But never had he seen sadism in such a scale. He weakly stood and braced against the wall, his shotgun leveled at the room.

Kurt nodded in response. His legs were weak and his shotgun felt like a dumbbell, but he couldn't tear his eyes away from the sight.

He noticed movement behind a pallet in the corner of the room.

"Contact far right!" He shouted. Keat immediately spun and leveled his gun at the corner. A wooden pallet fell down to reveal several green figures, smaller than the ones they originally encountered. They were unarmed and seemed to carry fear in their stumbled movements.

The group of fallen humanoids struggled to get off of one another as Keat connected the dots. The fluids, the nude corpses, and the green figures all clicked with him. He squeezed the trigger and didn't let go until the bolt slammed open. He stood with an unreadable look in his eyes, one that could only be understood by someone thinking the exact same thing.

He sighed in disgust as he loaded a fresh magazine before the bolt was racked. He continued double-tapping the dead but noticed something from the last corpse. A wooden circle hung from a chain around her neck, it had writing in a language that Keat couldn't read. A large curved sword with a read sheath was placed at her side. He couldn't tell if the sheath was meant to be red or if it was stained.

Keat assumed that the woman was some kind of warrior, due to the sword, and took what he believed to be her dog tags. He shot her twice in the head before he grabbed the sword and wiped its sheath down with his cloth, he then clipped it to his medical backpack.

He walked to Kurt, moving carefully to avoid the bodies, and helped him up, allowing the man to lean on his shoulder.

"Almost nice to see you like this, reassures me that you're still human." Keat forced a joke.

"Not the time," Kurt growled at him.

"Got anything flammable? Can't just leave those poor bastards to rot." Keat reached into his medical bag and produced a pack chock full of something. He threw it behind him and repeated the process several more times.

The pair limped to the surface, where the MIS stood faithfully in the same spot they had been left in. Keat ordered them to retrieve the Shrike and land near the cave. He didn't believe Kurt could take the long walk given the duress forced onto his mind. He could see how tired the man was through gazing into his eyes, even his coughing fits demonstrated the weariness.

Keat grabbed the detonator and gave it a hard before squeezing the trigger. He heard a deep boom from within the cave and not a moment later a shock wave erupted from its mouth.

"It just dawned on me, shouldn't there be more of those gremlin things?" Keat said. He frantically looked around as he stuck a needle in Kurt's arm and used the adrenaline shot.

"I don't wanna think about that right now." Kurt groaned.

The group watched from afar, they had gazed upon the two men and their iron companions. They had been camping nearby when they heard the sound of explosions. They came in pairs and seem to originate from the cave that two iron men guarded. A thunderous roar had erupted just as they had gotten a good view of the area.

Two men in strange clothing had come out of the cave, one of them showed signs of injury. The area was only barely illuminated by the moonlight so no one got a good look at either's face. But what did stand out was their clothing. They were unarmored by the looks of it, having only pouches along their chest. The injured man seemed to wield some kind of staff, while the other carried a much shorter one.

'Perhaps they are wizards, much like myself?' Elaine though. 'But that wouldn't sense. Caves are too small for us to maneuver in and many spells can't work due to the cramped space.' She continued pondering before she received a tap on her shoulder.

It was an armored man, and a long-time friend, who interrupted her. He was pointing at the pair of iron men who were walking in their direction. They stopped and leveled their weapons at the group. Elaine had been preparing for something like this, an incantation had already been prepared and sat in her mind as it waited for use.

She pushed it to the forefront of her mind as blue light began swirling around her. She tapped her staff against the ground and a blanket of blue light burst forth, it threw the iron men several feet back. With the threat delayed the group ran further into the woods.

The process had taken less than a second.

"Well thanks dipshit, how bout you let a birthday party dawn on you instead?" He leveled his shotgun at the foliage. He couldn't see through due to how thick it was compared to the rest of the bordering forest. He had opted to fire a few shots and soon enough he was reloading.

Keat did the same, as he hoped to kill whatever was lurking in the shadows. The fifty-round magazine allowed him to spray for some time, so long as he kept firing in bursts. His weapon fired fast enough to empty roughly in one and a half seconds.

They reloaded their weapons and waited, they stood still for several minutes before moving.

"Bots are dead. Looks like that blue shit fried their electronics." Keat said as he smacked its power button.

Kurt looked around and rubbed the back of his neck. "You know how to fly a helicopter?"

"The fuck you think I asked you for?" Kurt walked over to his companion. He groaned in frustration. "Send base a message about our evac. Let's hope that someone's awake.