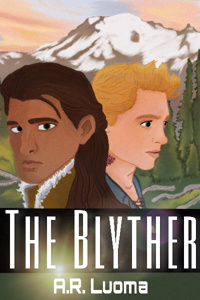 Eldon Miller is a solitary man with a painful past. When he's not protecting his village from vicious wolf hybrids and outside dangers, he hides away in his cabin on the outskirts of civilization. Bitter and wounded, he refuses to get close to anyone -- until a rainstorm drops a handsome stranger right into his path, testing Eldon's limits in every possible way.

Like all genetically engineered Blythers, Milo belongs to the ruling capitol of Dominus. Most of his kind are forced to serve the population, but Milo's unique anatomy is designed for scientific experimentation. Pregnant and on the run, he carries painful memories of his own.

With the safety of his village hanging in the balance, Eldon must find a way to hide Milo from the clutches of the government, but can he resist the tenderness, hope, and light Milo and his child bring into the dark corners of his world? When friendship turns to passion, and passion becomes love, demons from the past threaten to take it all away.