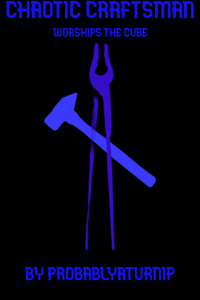 Summoned after an unfortunate accident in hopes they could protect the world from a coming threat, Ben and his classmates are gifted another chance at life. With fame and fortune promised to whoever is willing to fight for the sake of the world it doesn't seem like a bad deal, there's just one small problem. Ben wasn't blessed with any magic or combat skills, just crafting and enchanting. While the skills themselves aren't useless they also aren't seen as being necessary to the coming war. Now not needed and alone Ben tries to find a place in the world while meeting some of its colourful characters along the way.

A main character with personality

So the initial premise is very bog standard isekai *BUT* if you stick with the introduction you'll find that the character writing is brilliant. It takes a few chapters to get going but once it does you'll find a really well paced story about a craftsman, a god and an earth mage all with wonderfully crafted dynamics and realistic personalities.

The second big strength is pacing. Even the best stories on rr tend to have pacing whiplash where your given the most mundane day to day stuff that slams into world ending threats. This story keeps it steady and builds up its developments properly and with proper foreshadowing.

Definitely an author to watch out for in the future 100%

Props for having a reasonably interesting world. However, the author doesn't have a lot of practice writing, and it shows. He's not bad, but the language is typically simple and there's quite a bit of wasted space - whole paragraphs that you can skip and still understand the story.

Also perhaps a bit of a personal grievance, but it's not pure crafting. Absolutely personal taste, but I was sorta hoping for a story where he's reallllly pressed when he has to kill something, and this isn't that story.

So not bad, but occasionally can be a pain to read, and ended up not being to my personal taste.

I really like the interaction between the MC his new god and that he does not suddenly find a OP skillcombo or hidden power after being discarded.The world building is interesting on the big scale,but could need more fleshing out on the smaller scale. Refugees from hundreds of worlds, should not have a standard litrpg culture that would be a bit of waste.

.I would have liked to read more about the stuff he crafted after crafting his basic tools, but it was great that he started with them.

When I started, the first few chapters felt awfully familiar,  With an underpowered MC being discarded by the gods representatives for his lack in usable blessings.

In any case, he has a plan, some ingenuity and then he gets his own god and a clue.

With the sentence structure and vocabulary being fairly straightforward and simple, I only found 1 error to date.

Don't expect any Machiavellian plots while reading, at least not  in the first 14 chapters, but a smooth story leaning to slice of life with a little world building and no infdumps.

Sounds like Arifureta, but actually a slice o life

So first, this is not like the LN 'Arifureta' or 'clearing an isekai with a zero belivers goddess' despite being basically a straight combination of their concepts. Note I liked both a lot, but they have their issues (like the amount of angst at the beginning)... I am just making it clear that this is NOT another one of those.

It feels like he is a real character as he does have emotions and is working through his issues, its well done.  The biggest issue is he doesn't plan, he just pulls solutions from nowhere, so it feels a bit cheap and anti-climatic at times

The slice of life and world building here are good (could be lived up). The world is dangerous-ish, (he has a bit of plot armor) and he does get hurt so there is a bit of suspense (could be better)

The style is good and consistent.

That said, as a slice of life it is pretty good and I will keep reading.

Most important!!!! We really need to watch him as he learns bit by bit or if feels like he is pulling the solutions out of his butt. It does not have to be explained in detail, but we should have watched him theorize solutions explaining in his head why he things thet would work.

It is really not clear why he is special in his crafting.  I know this might be a big reveal later, but at the moment it just feels like he pulls it out to be special occationally.  It needs to be somewhat defined if not explained.

The world has lots of special skills so seeing them used by other occationally would liven up the world. (I know this is probably a small town with few high leveled people, but still)

You are doing a good job with his emotions of losing his family.  It feels real, but make sure not to drop it the moment he talked about it, people don't get over stuff the first time they open their mouth.

Deapan snark protagonist, with a heart of gold

Deadpan snark protagonist, with a heart of gold.

What makes this great is the humor. Yes you've been isekai’d. Yes you have somewhat shitty skills. But at least you've still got your sense of humor. This is what makes this story relatable. The deadpan snark is real, true, and excellent. I love it.

A wholesome story. A character-driven isekai with relatable characters portrayed well. The crafting process is detailed when it is important to the story, and the fiction takes a slow approach to worldbuilding. Definitely worth reading if you have any interest in isekai or fantasy in general. Grammar-wise I have only noticed a few minor flaws, but they haven't broken the flow of the story for me. Thanks for telling this story!

Plenty of tropes, plenty of fun

The author acknolwedges that they used a lot of tropes when writing this, but I don't think that's a bad thing. Tropes often become tropes for a reason.

So yes, you've got the hero-summoned protagonist who has to make his own way in the world with underestimated skills. He's hard working and good hearted, and his progress so far is slow.

But I like the direction his abilities are taking and the side characters have actual personalities (and nobody so far has been too cartoonishly evil or anything). The main character retains a sense of humor and focus without forgetting that he did lose his home and everything he came from.

There are some things that aren't just tropes: like how the evil that the heroes have been summoned to defeat hasn't arrived yet (finally something that makes sense - even summoned heroes need time to prepare) and there's some originality with multiple worlds being common knowledge in this one.

I can see a lot of potential with the gods of this universe, and I am looking forward to seeing the main character power up. I don't think the author will rush things too much, which is great, but does leave me with a lot of anticipation for things like reuniting with his classmates and awing everyone!

The story starts off like you expect: a guy and class are now in a new world, people get abilities based on what they are good at before being transported into a new world. MC gets crafting skills and doesn't get picked to save the world. He doesn't get any real cheaty powers and just relies on his smarts and determination so far.

It's not a grim dark, which is my preferred genre to read, but this book is a clear cut self insert of the author where the MC gets OP in 2.5 seconds. The MC feels like his own person. I recommend this book to people who like a more slow burn on the story. I hope the author continues with the story. I've enjoyed what I read so far.

The book starts as your standard reincarnation system fic. It does one thing that I love though which is doesn't make the system a large part of the story. It mostly revolves around the MC trying to understand the magic he has been given, and the relationship that he is able to make as an outcast among his peers. All around fun read and can't wait for more