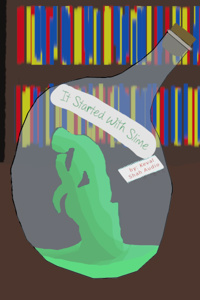 It Started with Slime

An alchemical experiment has gone wrong and results in a Micro Slime - Resh! This story follows a Micro Slime that has some level of consciousness and there is more to it than meets the eye. Micro Slime is just the beginning of course as it struggles to improve itself and works hard to grow and become stronger just to survive its harsh new reality. There is a lot more going and only time will tell if this Micro Slime can become strong enough to make it through to the other side.

This is a story with a Monster Protagonist, I am not going to be using any profanity nor include any sexual content, there will be violence and fighting description, hence Traumatising Content. I am a native English speaker and so the English here should be to a good standard, that being said even though edited there may be some corrections and typos so if you see some let me know! If it bothers you a lot, I am working to make sure all chapters have no typos but of course, some might slip through, will endeavour to correct any that are picked up though! Also, I started this a few months ago and so any feedback is always appreciated, also reviews! If you like or don't like the story let me know in the detailed reviews! That always helps me know what good and what needs to be worked on.

Working on releasing chapters twice a week, will try to increase that as time goes but at the moment that is what I am able to release, Patreon has more. If the story gets more popular then I will increase the releases. Aiming ultimately for a chapter a day if I can get to that. Chapters are roughly 1500 words with Interludes every 5 chapters being more or less than that! Enjoy!

Note: The language and writing are a little basic, to begin with, this is on purpose to reflect the simplicity of the MC also because I just started writing. Hopefully, you enjoy it anyway and the interludes should help break this up to start! Anyway, thanks so much for reading!

Summary: typical slime level up story for fans of the subgenre, but too many mistakes (especially for an author announcing good language due to being a a native speaker) and too simple in most aspects (story, character, choice of words) to be likely to appeal to a wider audience

- LAST EDIT: The author seems to actively work on the mistakes, which makes it more likely that you will find less problems than I did. The story description seems to be updated as well. New score to reflect improvements. -

I like simple level up storys once in a while, and the good rating of this story made me ignore the grammar and orthograpy mistakes in the description. Well, I managed to read up to chapter 6, and both style and content stay basic and the othography seems to get even slightly worse. Chapters are somewhat short, so that is a lot less than I usually read for a review. The concept is good, but nothing novel, on the contrary, everyone here read an evolution story before and will probably only start reading this one if he likes the genre.

The other review mentioned that the story would have been quite sucessful a few years back on RR, and I fully agree - then, the slime evolution concept was still somewhat novel and exciting, there were fewer (good) storys and text editing software was a lot worse, so one just ignored a lot of mistakes.

The rest of the story is just nothing special in any aspect, so the whole package does in my opinion not deserve to be rated as highly as it is or be on trending.

That being said, a thorough proofreading, some effort for more varied language and maybe using some more reasonable numbers (density, number of flies, etc.) would make the story a lot better and maybe even worth a general recommendation as a light read. So far only recommended for slime evolution enthusiasts as the author faithfully ticks all the usual boxes for fans of the classic (slime-) evolution subgenre.

EDIT: New chapter read, still no change. Maybe it will get better later on (the other review mentioned the slime gaining more sentinence, so take my impression with a grain of salt), but the content so far did not persuade me to read further.

EDIT3: The author seems to actively work on the mistakes, which makes it more likely that you will find less problems than I did. The story description seems to be updated as well. New score to reflect improvements.

Slime: The cleaning bot everyone needs

Reviewed at: Chapter 20 – Glutton for… worms?

Ah, where to begin. This story would have been all over the site if it was released a few years ago. Unfortunately, it wasn't. Add the slow, chapter release and limited chapter length, and you get slime. It's really unfortunate.

Style: System messages dominate the story at first, but they works well for the first half. Then mc, Resh, gains thoughts and the styles explains to give space to his thoughts. The style changes for the third time when he evolves into the copycat slime, which I think perfectly brings out the character traits. Though the story has fewer described scenes, even in the latest chapters, they work since the character himself is not yet intelligent enough to take in all of the worlds.

Story: The plot follows the slime as it goes around killing, rampaging, pillaging, and rap-- ahem. Mc fights. There's not much-choreographed action, as there is no place for it, yet, but such a detail would have only dragged the story instead of adding anything to it, by my thoughts.

Grammar: I can't say. I can barely write sentences.

Character: The character grows on you. The way he ignored his father and bumbled out of the lab toward freedom was especially brave and straightforward. I wish he grew intelligent from experience rather than evolution, but that's the choice made for him. There are a few missed opportunities with the skill assimilation, but it's done well.

Overall, the book is a good read. It's small and precise. Sure, the book needs pacing help, but which one doesn't? And I hope a villain is introduced into the story soon. It'll give it the edge it needs.

This novel is a realtively normalized story  about a slime who wants to become bigger and more stronk. However, I do wonder how the slime was created, since i did not see any explanation for that yet. We follow the story of Resh, who has a system which is shared in this world (nice). Additionally, he has to suffer drawbacks if he does not watch out for the limitations of his skills, keeping them logical as possible in a magical world (nice)