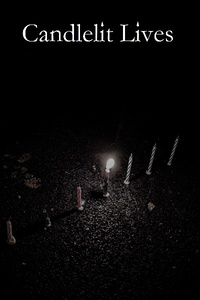 It is an exciting time for the people of the Eurial continent.  The new [Mage] Class has allowed the powerful to begin uniting the fractured tribes and villages into kingdoms and civilization.  A century on, and the continent is quickly consolidating into competing states.

Amelia, student and daughter of a humble [Hunter], just wants to learn [Fireball] and become a [Mage] in service to her [King].  She succeeds.  All is well as the months fly by, eagerly awaiting her Classing.  One day though, she receives a (unique) Trait: [Reincarnator].  And then, she dies.

And so begin her many lives.

*The "Experimental Storytelling" is that each life is approximately a chapter-length (even if a very long chapter).  That means things move very, very quickly (my Excel spreadsheet hates me) and, regretfully, we often spend very little time with the people, places and things in each life.  Some might call it an anthology. In Volume 1, each life is literally only a chapter.  In Volume 2, the word count is in the same range, but some lives are split into multiple chapters.

Cover art for both Volumes courtesy of gej302.  Fiction cover art is my bad photography of a dark corner with candles. 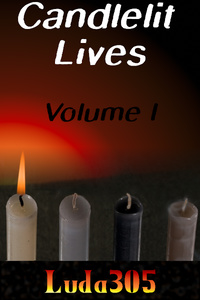 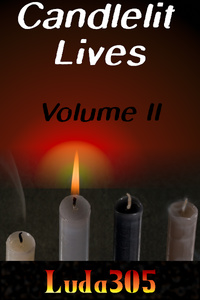 On a lot of standard metrics, the story isn't impressive. The language is readable, though description is barely there. The MC isn't all that complex/interesting, and the rest are barely gestured at (with one exception from about a third of the story in). The story is extremely fast paced, and the plot is barely a thing. The litRPG system while potentially interesting, barely matters.

And yet, I enjoyed it immensely. It takes a hard and rare genre and does it very well. The flaws either don't matter to the core enjoyment, or even come together to enhance things. For example, the bare descriptions, fast pacing and low stakes come together to create a floaty, calm mood to watch the world pass by. A warm summer evening floating down a river.

Of course, that is very much a subjective thing (more so than any judgement about fiction), and if you're not in the right mood, or want something with more tension going in, then you probably won't enjoy it as much.

One thing I loved was the historical length. In early lifes, people have only just discovered the [Mage] class, as opposed to [Shaman]. And then later Mage gets rerated as more common, because it's spread enough. The system as a whole actually changes, which I thought was super neat.

I would have liked to see more of the historical impact of the MC. Traces of pervious lifes show up occaisonnally, but one of the big ones (the goblin thing), hasn't. It did get some foreshadowing, so maybe that'll turn up if this story gets some followup.

Finally, I thought the climax was pretty damn well done. It caught me by surprise how much it upped the stakes, had some really nice emotional moments, and even set up some potential overaching plot (though I don't know if I'm keen on that last one).

Reviewed at: 7. Back Up to Speed

The reincarnation mechanic of the MC opens the door to something distinct from other LitRPG stories.

Two stories are being told - the MC's and the civilization's.

I find it an enjoyable take on LitRPG civilization and its development over time.

Overall, it is worth giving the story a try!

Blitz version of “In Loki’s Honor”

If you have read In Loki's Honor, this story has an extremely similar setting, except each life is condensed to 1 chapter, instead of a whole arc. Because of the serial reincarnation concept, and the lack of well written stories like ILH and Cadence Lee, the genre isn't explored enough for me to criticize the author for doing something similar.

The condensation of each life has the plus that we get a lot of lives quickly; but the downside is that deaths are too quick, and we don't get the proper amount of enjoyment from each life. The MC gets OP too quickly with not enough satisfaction as time skips are more frequent than not.

Plus the MC gets a tag along that becomes indistinguishable from the MC, to the point that readers mix the two up all the time.

That said, there's something mysterious about this genre that makes me love it so much that the flaws barely matter, at least so far. Perhaps the condensation of each life into one chapter cuts out a lot of the cliche boring stuff I've read a million times in isekai, and keeps only the good parts? Also, progression fantasy is at full force here.

That said, I do have gripes about the ending, put in a spoiler.

The last antagonist attack came out of nowhere, and was a one in a billion encounter instead of something foreshadowed, or even causally induced. Because the MC was so OP, the author had to manipulate probabilities and apply plot armor to the villain so that there would be conflict... and that's annoying.

Also, the MC acted out of character. No matter how sad you are, murdering tons of innocents and your parents is inexcusable... you'd think someone who'd lived for centuries would be rational enough to internalize that. Lashing out or isolating would make sense; a murderous rampage caught me by surprise and was very jarring. Maybe it's just me who cares a lot about rationality, but this might turn some readers off.

Some people have complained about the style of the story and some have complained that the style shifts. I don't think this is a mistake. The story starts basically at the start of history reads more like a spoken word story, shortly after the style shifts the more of an"accounting" type of story, similar to spoken but very much in the vein of the early written work. As it progresses it reads like a tale, very similar to the modern style that it shifts to. As the story progresses through history it's style progress through histocric story telling. Full disclosure I may be reading too much into it but I can't believe this would be a coincidence.

This is what I've wanted from my serial reincarnator fictions. I appreciated the frequent deaths, the occsional survival and the general truth that even with broken stats, there can be something worse out there that just doesn't give a damn about your OP silliness. I would recommend this for anyone who enjoys a fast paced exploration of might of beens and what ifs with the kind of balance a bad homebrew brings to the table

This story has so much potential that it is hard to imagine. Up to this point it was quite good. but it wasn't flawless

I wouldn't recomend rewriting the story. Cosmetic grammary cleaning and maybe some wording. If dear author would like to rewrite it I would recommend really to think hard on how long each life should last. Should it be described in more then a single chapter. I wouldn't recomend to have lifes longer then 10 chapters. Otherwise it is highly possible this story will lose this nice feeling of life fragility and fludity of time perception for long and short living species.

It is good that there is no infodumps, readers discover story world and system atep by step through new lifes.

Characters are all episodic (excluding MC1 and MC2). As this is first volume I would recommend to introduce some that they meet in more then in one life. It was good idea to make class influence behaviour of characters or at least I felt it in a few incarnations.

My biggest concern is with the ending of volume 1. It felt very rushed. It is sometimes difficult to discern two main characters as they change names very often.

I loved this story. It was clever and interesting. Rather than a normal story I would see this as a colection of interconnected short stories. I only have two complaints (other than wishing for more). The first would be that some of the lives are short, and thus their chapters are as well, but this makes sense in the overall nature of the story so it actualy adds to the story overall. Second was that in the later chapters the system was mostly ignored, when a good amount of the early chapters focuses on the detials of the system. Once again this makes sence in the setting of the world. Once you have enough power built up over diffrent lives you don't really care all that much anymore.

To end things I loved this story. It was amazeing and I can easily see myself returning to reread it in the future. Thank you for writeing it. I would love to see more.

I really loved this story! It's experimental and varied. There are ups and downs and a shifting focus between progression and how the main characters relate to each other. For any reader of litRPGs, this one ought not to be skipped!

Prepare yourself for triumph and laughs - but also for tragedy and loss.

A truly enjoyable romp and genre experiment in the vein of In Loki's Honor. The nature of the experiment makes it a quick and satisfying read, and my main complaint is that there isnt (yet?!) more of it. I can't wait to see what comes next. Thank you for bringing this story into the world!

I enjoyed the story. There are a lot of issues with it, but I found that for a short, fun read, the story worked. My main complaints would lie in characterization. The chosen appoach made it difficult to follow the characters escpecially with the changing personallities. But overall a fun read that doesn't overstay its welcome.