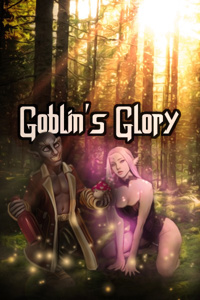 This story is intended for an R18+ audience. Reader discretion is advised.

The Sword Saint, a man unparalleled in combat, embarks upon a quest that derails the entire world. He forges a bargain with a trio of ancient and evil hags to slay a dragon in exchange for the promise of immortality. The hags upheld their end of the bargain, but it came at a cost…

His name is now hated and cursed by all, spoken of only with contempt. That’s not mentioning his own, more personal blight. Transformed into a goblin, ill-fated to become the thing he most loathes. He has all of eternity to come to terms with his new form.

It’s been centuries and he still can’t escape the vermin that he’s become.

The story is about an OP Human Sword Saint who is transformed into a goblin and has to live with the social and physical consequences of being a goblin slave, though he is still very powerful.

I like the concept of someone being transformed into a creature he despises. I also like the worldbuilding. In terms of the story and its pacing, I find it a little slow.

The MC spends 2 chapters in a cage, and 4 chapters outlining a fight scene with people that he is much stronger than.

The MC himself seems pretty strong (both pre- and post-transformation) but is not shown to be too proactive (e.g. 2 chapters in a cage), have a driving goal/dream, or have the usual admirable qualities (e.g. hard-working, funny/quirky, etc.), so it is difficult to root for him. Based on the story and his background, it makes sense for him to be moody and withdrawn though. The other characters have not done much so far, but it has only been a few chapters so far and most of them have not had much ‘screen time’ yet.

The grammar is pretty good. There are very rarely a few minor errors, but most of them seem to have been found and mentioned in the comments and corrected by the author. Being willing to read and act on these comments meant I gave the book an extra star on the style score.

So far this novel has a pretty good start.

As advertized, this novel is about a goblin main character, pretty overpowered and has some R18 scenes, which are pretty fine for RoyalRoad standards.

The worldbuilding so far is good as well, somewhat slow pace but not too slow, it still progresses the plot at a decent pace.
Pretty classic plotline, so you know what to expect, but not boring.
Most question I had do get answered in the next few chapters, so far no plotholes.

No grammar issues as well, a normal writing style but easy and fluent to read.

I am sure all people know the clasic "reincarnation" when people suddenly change into monsters but this story takes a different aproach, a hero of his people "loved" by all and seen as the absolute good guy is cursed by hags who doublecrossed him.

not only does he become a goblin but he also has his mind mixed with goblin instinct, a combination which makes him a verry intruiging character. On top of that he also has become immortal meaning that he is forever "doomed" to hear about how his dragonslaying adventure ended with the hags creating a forest that consumes the world.

(those hags also HAVE THE GALL TO CALL DRAGONS ARROGANT!!!!!) (okay i am proud but not arrogant, mother tiamat, mortals are just jealous)

I also appreciate the world building, the way goblins and their use of magic are portrayed or the elves with a noble ranking system with different houses seemingly. Worldbuilding is not always easy yet the author nailed it and I can only respect such a thing.

The combination of all these characters, the writing, the worldbuilding and the story makes me see this as one of the stories that has a big potential, imagine what you could do with a litteral IMMORTAL goblin/swordsaint.

I sure hope to see more of this story and I hope others are interested as well to see the adventures of this glorious goblin.

Jack0fheart has done an excellent job with this story - I only wish that they would write faster!

Quite a different world from the vast majority of stories on RR. Lacking the classic blue boxes that seem to dominate in trending recently.

This is worth reading simply for the change of pace and lack of the classic grinding MC, I think you'll like this one a lot!
Don't mind the R18 warning by the way, it doesn't feature any more than a bunch of other stories here on RR.
Thanks again for the wonderful story! <3

The 18+ rating is there for a reason.

Not much has yet been released, but everything is looking pretty decent right now. There haven't been too many noteworthy characters yet, though that might be due to a more focused retinue currently. Those that have received a name are of course very memorable.

There is a bit of a rush of plot in the start of the story, but it evens out to a good pace by the end of what we have yet. Nothing to complain about in that regard.

The style is pretty good. However, the author does have a love for lengthier speeches during some of their explanations. This is personally not a problem at all, but some might see that as a negative.

Finally, that age rating up at the top is not a joke in any way, shape, or form. I thought that the first chapter set a good standard of what kind of level it would be, but the later releases have certainly proven me wrong. Not my usual taste in writing, but it is pretty good nonetheless.

Overall 4.5/5: This story is well written and fun to read. It's engaging. The prologue seemed like backstory, but everything after made me want to continue reading. Be prepared for violence and smut though. Oh boy, this is very graphic (sexually).

Style 5/5: I like the author's writing style. It's a bit dense at the beginning, but is easy to read after that. There's not much exposition so it reads dynamically.

Story 4/5: At chapter 8, we get the main plotline, so it takes some time to reach. It's direct, but I don't feel the urgency in completing it.

I'm not entirely sure why the Expanding Forest is so dangerous. It was briefly mentioned that non-monsters get lost or something, but it's too early to tell the scale of this forest compared to the size of the landmass. It also doesn't help that the High Elf lady was so eager to fuck goblin MC even though her virginity is needed for the ritual.

Grammar 5/5: No complaints. There are minor ways to improve some sentence structure, but it would just be nitpicky.

Character 4/5: So far the characters are believable. They all have their own goals (although goblin goals are pretty simple) and flaws. It's hard to tell if the characters are well done yet because there're only 10 chapters out so far. MC is well fleshed out, but I'm not entirely sure about High Elf lady. MC may not be a real goblin, but he still looks like one. Her aversion turned into lust super fast, especially for a virgin. She also seemed somewhat experienced with sexual desire (no nervousness and practiced seduction). Maybe it's expected for High Elves or something, but there's not enough chapters to tell.

Conclusion: I recommend this story. It's engaging and has a well crafted world, while not being heavy with infodumps. Just be prepared for the smut because it's quite explict.

This starts out with an arrogant sword saint who makes a big mistake. He ends up cursed to be something he looks down apon. A goblin. He still has his abilities amd skills so he is a bery much OP goblin.

Be warned. This story is very much for adults only. It has a lot of mature content. So if that aint for you, i suggest you give it a pass. But if your actaully an adult go ahead and hive it a try. Just dont whine about it afterward if you do.

The goblin DINK is a goblin of the classic variety.  He is always looking for some human females.