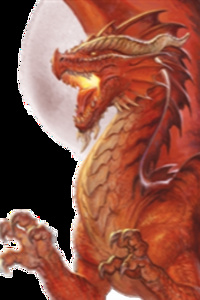 Reincarnated as a Red Dragon

Definitely Not a shark

Arthur was a loner in life. He was also a big D&D nerd. He was murdered in a burglary gone wrong.

Arthur awoke to see in front of him, a woman, who explained he was going to be reincarnated into the world of D&D! And as luck would have it, also as an Ancient Red Dragon. Follow the thoughtful MC as he makes his way through the magical world as a dragon, in his own way!

(This is a D&D fiction, Set in a classic D&D world, with the MC being reincarnated into an ancient red dragon from D&D. This is also my very first written story ever, so bear with me. Thanks for reading!)

Definitely Not a shark

Im sure most aspects of the story are good, but three critical flaws make it nigh unreadable.  These flaws are NOT obvious and the author shouldnt feel bad about not knowing better.

1) Present progressive tense is standard for d&d narrators, where you talk to players to get them in the moment, but does NOT work in written books.  "He looks around, then he flies" as opposed to "He looked around, the flew".  It makes it sound like a nature documentary. There is a place for present progressive in written works, but only with deliberate care and moderation.

2) The prologue limits the story.  You want prologues to be mysterious, fragmented, that guve background while also promising mystery.  You never start the story by explicitly outlining the nature of the cosmos being a wish fulfillment machine.  There'snothing wrong with wish fulfillment, but you cant let it LOOK like wish fulfillment. Code Geass is a great example of how to write the power fantasy of a mary sue while looking like the exact opposite.

3) Reincarnated, but starting as an adult? The half the point of reincarnation Is getting to learn the ropes of the world. Skipping childhood, or apprenticeship,  or solo survivalist, and junping straight To civilization and adult powers skips that vital, slow, chatacter and worldbuilding stage.

Im a sucker for dragons and litrpg isekai, but these factors render the story painfully unreadable.  That said, as the author practices, hell get better.  By the time he writes a second story, he should be fun and readable.

Good story but needs some work

Reviewed at: Chapter 6: Nightmare and magic

An interesting story, but i had to stop at chapter 6 because i got annoyed by the writing style.
i had the feeling that nearly every sentence started with the name of the person that was doing something and then just a description of it. So in chapter 5 around 20 sentences started with "Arthur" and then what he did, thought or felt. It was much better during dialogues.

Maybe i'm a bit harsh, but it annoyed me. Good luck with the story and i hope you will improve, because i did like the story so far.

Is this story going to be the next Beware of Chicken? No, probably not.

I've also written a fair number of stories myself, some of which have been in the top hundred. One even made it to #10 (somehow - I'm still not sure just how.)

So, having said all of that, it's been a while since I simply enjoyed reading a story as much as this one. The premise is simple and well-executed. It knows exactly what it wants to be, and doesn't overstep its boundaries.

Down to the review stuff.

This story sticks to what it does and manages to do it well. I often begin to skim over large sections of most stories, growing bored with the excessive amount of detail put into something which is barely relevant and certainly won't be in a few chapters. That didn't happen here. It flows smoothly and consistently. Five stars.

While grammatical errors and typos are rare, certain phrases could be better written and a few words begin to repeat themselves. Despite that, everything important is described effectively and succinctly. Four point five stars.

Arthur is, to me, a frankly hilarious name for a dragon. The name itself is reminiscent of human kings or anthropomorphic cartoon animals; certainly not an imposing dragonic being. Curiously enough, the name fits our scaled protagonist quite well. He is thoughtful (as is stated several times - show and not tell, Sharky) and optimistic. Despite his untimely death, he adjusts to his new shape quickly without losing his personality, a quirk I've found incredibly frustrating in most stories. A change in body does not mean a change in mind, at least in my opinion. Regardless, I was initially going to give this a four point five, but having reviewed my own opinion, I must boost it to five. Ergo, five stars.

To end this review off, I must finish with a simple conclusion to match a simple story; that thus far, it doesn't appear to be ready for a several-thousand-page epic like Wandering Inn or No Epic Loot. Despite that, it's a story I've found amusing and almost wistful. Not to sound like a common cliche, but Sharky's writing style somewhat reminds me of mine when I started out.

This is an edit.

Having been told to 'show and not tell' several times myself, I feel it would be helpful to describe what that entails.

A decent example would be, in the case of our oft-repeated 'thoughtful' phrase, to instead place multiple occurrences of Arthur thinking a situation through. In other words, instead of describing how the person is feeling and stating it outright, describe their actions in such a way that the feelings are implied.

While I've given several reviews in the past, most of them were review trades and had very little actual thought put into them. This is the second review I have made where I sincerely enjoyed - and look forward to - the events of the story. Good luck, Sharky!

This is another edit.

I got the first review! Most likely the first of what will be many.

This story is pretty good in some aspects.

Grammar: Only some small mistakes.

Style: It is easy to see, that the author hasn't written many stories yet. But still entertaining.

Story: In a D&D world a human gets reincarnated into a red adult dragon. Questing, minion collecting and monster slaying. While this is certainly entertaining there are quite a lot of parallels between this story and Vainqueur the dragon. But while VtD was more focused on kingdom building and more branched out, this story seems to be focusing on our MC a bit more. A thing that also seemed a bit unnatural was how fast everything is going. I don't mean the fights, I mean the people and minions. They are already adapting, which is waaay too fast. Considering how we are ten chapters in and only two days have passed, either there was an unrecorded time-skip, or the author is going too fast, with the population at least(I mean where the citizens are outside their houses even though it is only day 2 of the dragons arrival, and the MC is also acclimating himself too fast with his new identity as a dragon, sure being a dragon with a superbrain surely helped, but still day 2 and acting as if everything is natural).

Characters: Here is sadly where the authors inexperience is clearly seen. The dialogues seem blocky and unnatural, while the characters themselves look quite nice and we also get some insight into their thoughts, the dialogue is a bit of a showstopper here.

All in all a readable and even enjoyable fiction. Though hopefully the author will improve the dialogue with time.

Reviewed at: Chapter 9: Kobolds and couriers

The main character being a spell-slinging dragon is great and reminds me of Vainquerer with fewer 4th wall breaks. It may be simple but the story has been very entertaining and I'm excited to see where the story is headed. I don't know what more to say than go read the story.

Enjoyable, if a little simple at the current

Reviewed at: Chapter 14: Dryads and humans

A lovely little reincarnation fantasy with dnd sprinkled in. Enjoyable but simple for now, I'm very excited to see how this fantasy will grow, it has a lot of good potential.

Style score: The style isn't quite unique, but is readable. I agree with RedPine's commentary on it, writing it as it is makes it less than it could be.

Story score: As it is now, the story is quite basic and the cliché reincarnation fantasy. There is some personality and already good characters, it's not quite fleshed out yet. But this isn't a bad thing, something amazing can grow out of the simplest beginning. Even in earlier chapters I see many directions in which this fantasy's story could go. If the author is competent enough (and I think they are) this will become a fantastic story.

Grammar score: Good grammar except for issues her and there, not so much as to make it unreadable, only every few paragraphs, also the author does their due diligence to fix it. (Stop misspelling maybe, lol)

Character score: The characters are not developed yet, they have basic personalities but are relatively bland. Could definitely use some work.

All in all, a great beginning. Has enjoyable little adventures, and has great potential. Good job word-smith.

Author is definitely getting better.

Reviewed at: Chapter 14: Dryads and humans

I like the story. I find it a decently fun read, even if nothing special. The grammar is fairly good, the only thing I noticed was some awkward word choice here and there. The pacing is decent, if jerking in the beginning.

My biggest problem with this story, the thing that made it hard to keep reading in places, is size. The author doesn't describe relative sizes and distances accurately or consistently. A few measurements make no sense, and the MCs size is inconsistent at best, even when he isn't using size changing magic. This does get better as the story progresses, and I have noticed less of this in the recent chapters. Big dragon is big, and should be seen clearly from more than 100 ft away.

A few other gripes. The side characters seem to change emotions too quickly, going from scared for their lives, to calm and collected in the span of a paragraph. I dont really understand why this random small town has so many spellbooks. Maybe magic is very common in this world. My final gripe is that power levels aren't made terribly clear. He appears to struggle in places I dont think he should, though that might be personal preference.

All in all, a decent read. I'd recommend it, even if just because I really enjoy stuff like this. Try to power through the first few chapters, the author has significantly improved even in the relatively few chapters that are out.