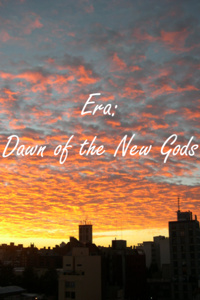 by Lami the Sheep that eats Lions

This is a post-apocalyptic story about the origins of various powerful figures that appeared after the apocalypse event. During the apocalypse monsters appeared possessing powers and constitution beyond the limits of human understanding. They ravaged the world and brought down all governments.

The first part of the story follows Jade, a terrorist that was ravaging the world before the monsters arrived.

The New Gods, the most feared and revered beings on the planet. They are forces capable of absolute destruction and creation.

The Council of Branches

Hayley, the Living Lie (if that is her real name)

Chao Feng, the Prince of Stars

Lara, the Mother of Heroes

The Great City of Tver

Gog, the Ever Losing War

Avatari, (only the name is known)

As Impactful as they are no one knew their origin, they are called the New Gods so there must be Old Gods. I and my collegues dedicated our lives to finding their origins only to find out that the beings we fear and adore were once like us, average, mortal and weak... at least most of them were.

*It is a sort of reverse RPG as no one knows anything either skills, abilities  or how the system works but they find out on their own or develop their own skills or abilites.

*The story has many protagonists and point of views but it paints a beatiful story of survival in a world of endless perils for both the humans and the monsters(some monsters are protagonists).

*There is a system but it is very limited (not overpowered) and treats everyone equally, monster or human. The system is very different from regular systems; no exp, levels and system items.

*The story is a world building story where overall, the world is the true main character.

The cover image photo is credited to Angel David

*For now it's one chapter a day

I’ll give you a review

it feels like you had a vision of what you wanted and you got there a tad to fast. Personally I feel your concepts a bit intangible. Like I understood the system but I feel more detail into the design and logic behind the inventions would go a long way as I find it a bit odd a material can work as a glue and a explosive. Different blood maybe? Also your numbers got out of hand really quick 100,000 is a lot for a short amount of work. Well not compared to 8 billion but still that's a lot of dead people in one area makes it feel like humanity is kinda over.

anyway liked the idea of futuristic apocalypse liked the character backstory made me feel uncomfortable highly recommend making the entire thing something really hard to read but like in a good way.

this is my first review so don't take my star rating to heart your gonna be my bace line from now on.

Apocalyptic system story that is not serious

Overall readability is fine, it's a bit loony toons in the rapid power ups and random character changes who also seem to have sudden growth arcs.

But if you want a read it's not a bad story to pass time with this works.

Has all the tropes magic, martial arts, soul and blood magic's with a MC that seems to be tech creator who can make anything eventually.

One negative is some lore and info is dumped in that derails the story, like foreknowledge characters won't know ie Lara having precog powers, a lot of empty text that would be best in a separate fiction of lore to reference and not filling up the word count on this story with just background information. This would show the true length of the story as the verbose lore dumps can be multiple pages long and just 3 paragraphs of development to the characters or plot which most readers won't need to have the lore to notice in future reads and the people who want tk see the lore would have an easier time reading if it wasn't sprinkled through out the entire story

Side characters all seem to be tragic backstory ex humans. So if your against dark stories would avoid as could be triggering for some people

Not bad for a first time author, and thankfully no romance, harem

I had a lot of difficulties with this story at the beginning: I did not really see where it was going, some events did not really make sense to me: sometimes too fast, almost dismissive of some things, some times a tiny bit too slow.

BUT after the first 50 or so chapters, it really had me hooked especially with the Mira storyline and the Sanctuary. I really began to see what the author promised in the synopsis like "it is the story of the world" and a fair system: no free power ups, some real problems for the protagonist, and great world building. So after a rough start, the story really is great.

Style and Grammar: Even if I am not a native speaker I could spot a lot of problems at the beginning. I had difficulties to understand some sentences due to numeral typos. And the syntax reminded me of german which is not really adapted to the english language with really, really long sentences. But it gets a lot better and the author is really wanting to get better and accepts all help provided.

Story: What was promised in the synopsis with some unique takes on the system with its fairness and ranking system. The story is non linear with sevetal main characters but make nonetheless sense.

Characters: Not americans so bonus points. (just kidding) But it is true that it is quite refreshing. The story has (from my point of view) 2 main characters, but we see a lot of different point of views. Jade really is a "classic" dark bacgroundish assassin turned hunter character at first glance, but his technological knowledge and his complex drives which do not include senseless homicides redeem the character. And he really is charismatic and hard working because like I said nothing really is free in the story.

Mira really is the best girl and kept me on the story long enough to make me want to say. The character is complex, but the author really keep her goals in sight like sending her to the US. Not really a champion, neither a wargoddess or a genius, but someone who climbs the ranks thanks to her hard work.

Conclusion: Really great story (with no unnecessary love side-stories) who keeps getting more interesting, and an author who keeps getting better. Only thing I could maybe suggest would be to rework on the first few chapters for the grammar.

I personnaly wish to see how far it will go!

The system fantasy I've been waiting for

This story has a, from what I can tell, completely unique system with many interesting facets. Unlike many other system stories, the system does not randomly impart skills on our intrepid protagonists. No, if you want your amazing fantasy skill, your gonna have to risk your life day after day, week after week, and month after month. Things don't come easy in this world, and the cast is better for it. We can see how the societies develop around this setting as the story progresses.